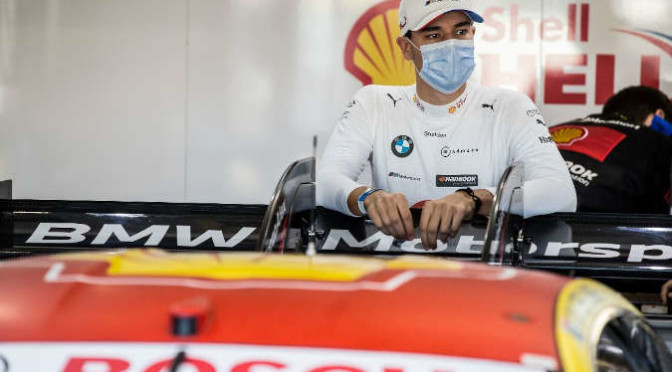 Support from spectators in the grandstands, sporting excitement at the track: this weekends fifth DTM season round at the Nürburgring (11–13 September) promises to become another motorsport highlight. And it couldn’t be more classic: on hallowed motorsport ground, the venue where the DTM has already had 82 races, the 5.148 kilometres long Grand Prix configuration will be used for the first time. In the current season, five different winners from eight different races held so far delivered the sporting variety that is typical for the DTM, along with close battle and surprising elements. For the second time after last weekend’s round at Assen (NED), spectators are allowed in to support the Audi and BMW works drivers from the grandstands.

For spectators who want to experience this motorsport festival from up close, a strictly limited number of one-day tickets for Saturday and Sunday was only released on Tuesday. At a price of 49 Euros inclusive parking space, the grandstand tickets are only available online until Sunday at noon from the DTM Ticket Shop (tickets.dtm.com) or the DTM Ticket Hotline (+49 1806 386 386). With the late summer weather that has been forecast, plenty of sunshine and temperatures up to 20 degrees and more, spectators can look forward to a packed and varied programme. Next to the DTM, the new DTM Trophy with production-based GT sports cars, the Porsche Carrera Cup Benelux, the GTC race series and the Lotus Cup Europe are present, too. Moreover, SAT.1 is broadcasting both races on Saturday and Sunday live from 13.00 (start at 13.30 on each day) with fascinating footage from 60 cameras. Qualifying, background stories and the support races can be watched at the streaming options ran.de and DTM Grid (grid.dtm.com) on the screens and smartphones at home.

Five different winners from eight races so far this season

The 2020 DTM has impressed with close competition and entertaining races, exactly what the spectators like. Following three consecutive victories, last year’s runner-up Nico Müller (SUI) looked set for a walkover, but then, his fellow Audi driver, defending champion René Rast, countered with a pair of victories at Lausitzring. Since then, Lucas Auer (AUT, BMW), Robin Frijns (NED, Audi) and Sheldon van der Linde (RSA, BMW) provided entertainment. However, it is not just the number of winners that is a guarantee for excitement. The same can be said about the way in which the races were won. Only 0.089 seconds decided about victory in the third race of the season – it has never been closer in the DTM’s long history. BMW made a comeback by scoring a 1-2 following a year without a race win. And with Robin Frijns winning at Assen, the fans celebrated the first DTM race win for a Dutch driver since 2004 with standing ovations. The recovery of South African Sheldon van der Linde (BMW), who had started from 14th on the grid in the rain race on Sunday also excited the fans.

At the Nürburgring, it is quite possible that a sixth or even a seventh winner will emerge. Ex-Formula 1 driver Timo Glock (GER) in particular has already racked up miles in the lead, just like Loïc Duval (FRA), racing for the Audi Sport Team Phoenix. Duval’s teammate Mike Rockenfeller (GER) is also among the possible candidates for a podium finish. Ex-DTM champion Rockenfeller, born in Neuwied, the BMW Team RMG from Andernach and especially the Audi Sport Team Phoenix, based in the Nürburgring industrial zone in Meuspath, all have a home ground at the ‘Ring.

83 times at the Nürburgring, but a first at the 5.148 kilometres long Grand Prix circuit

The fifth season round at the Nürburgring marks the halfway point of the compact DTM season with nine race weekends. After eight of 18 races, Nico Müller is leading the standings with 164 points while Robin Frijns has now moved up into second place with 138 points, having reduced the gap. Champion Rast is rounding out the current trio of title candidates with 120 points. Next up are Duval (71), Glock (62), van der Linde (60) and Rockenfeller (52) in fourth to seventh place of the points’ standings.

In the Eifel, the DTM is making a comeback that includes uncharted territory for all drivers. For the first time since 19 years, the DTM is racing at the Grand Prix track again. However, the GP circuit was only 4.556 kilometres long at the time. Currently, the GP track has a length of 5.148 kilometres including the Mercedes Arena that was created afterwards. The Audi Sport Team Abt Sportsline, in particular, will have fond memories of the EIfelrennen on 6 May 2001. At the time, the team from Kempten celebrated the first win for its privately-entered Abt Audi TT-R with Frenchman Laurent Aiello behind the wheel. Since the debut of the touring car series in 1984, the Nürburgring has been a regular fixture on the DTM calendar. It is already the 83rd race of the DTM at the ‘Ring, where three different configurations have been used with the GP circuit, the sprint track and the Nordschleife.

Only one week later, 18-20 September, the action will be at the 3.629 kilometres long sprint circuit. After all, the DTM remains in the Eifel for a double header, so two back-to-back events at the Nürburgring on two consecutive weekends. Including Assen, this means three DTM rounds in a row, a huge challenge for the teams in particular.

» Quotes – preview, Nürburgring Grand Prix
“It is great that spectators are admitted into the grandstands at the Nürburgring as well. Thanks, also on behalf of our fans, to everyone who has made this possible. How important the return of the fans is, we have seen at Assen, particularly on the starting grid and during the standing ovations at the finish of the race. The Nürburgring is a symbol for the DTM’s tradition and is always good for surprising race results. Therefore, sheer excitement can be expected again this weekend.”
Marcel Mohaupt, managing director, ITR GmbH
“This place has so much history. Coming here is always great. The track is very technical with quite a lot of tyre wear. Last year, I had great battles there. Cool that we are racing at the Grand Prix circuit. The last time I drove at this configuration, the one I prefer, with the Audi LMP1 race car in 2016. I remember being on the podium.”
Loïc Duval, Audi Sport Team Phoenix
“After my maiden DTM race win last weekend, I am heading to the Nürburgring full of motivation and a lot of positive energy. I am really looking forward to racing there again, especially at the Grand Prix track. This will definitely be the highlight of the two back-to-back Nürburgring weekends. I am particularly looking forward to the Schumacher-S. I am curious to find out whether we can take it flat. That would be very special indeed.”
Sheldon van der Linde, BMW Team RBM
“The Nürburgring, that is a historic venue in motorsport, particularly because of the Nordschleife. I have never raced at this legendary track, but I will be using the days prior to the DTM weekend for a few laps with the road car. I already know the new Nürburgring from my days in Formula 3 while I have also raced there in Formula 1. I hope I can benefit from the experience from the many laps of testing in the DTM pre-season test in June this weekend.”
Robert Kubica, Orlen BMW Team ART