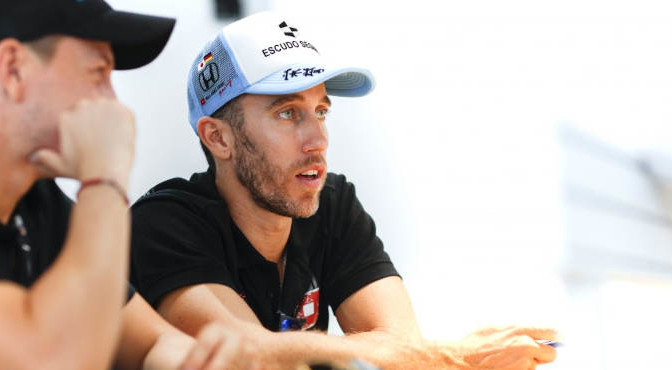 Following his title near-miss in 2019, ace Argentine Guerrieri is aiming again for the big prize *Continuity of third season with ALL-INKL.COM Motorsport and Honda power a big plus *Guerrieri: “I have the same ambition, the same will, the team is behind me in every detail”

He was the nearly man in 2019 but Esteban Guerrieri is back to chase the WTCR – FIA World Touring Car Cup title that eluded him at the final race of last season, armed once again with an ALL-INKL.COM Münnich Motorsport Honda Civic Type R TCR.

How happy are you to be going racing again?
“In terms of the sporting side I’m really happy to come back to competition, to real racing and to get going with the season. If I fully focus on that, and of course that’s what I try to do, and to be as ready as possible, I will try to deliver as much as possible. But it’s not the easiest way to go racing. The infection is still around and it’s all about following procedures and this is important.”

Have you done enough to prepare?
“We did a few [test] days which is already very good and we learned quite a bit about the new Goodyear tyre, the things that are different compared to last year. We got some useful information and we are focusing on what we learned and will try to replicate this for the race weekend. With the amount of testing we did, we could extract a lot of information, as much as we could get.”

How significant will the new tyre be in terms of the title outcome?
“I wouldn’t say it will have a huge impact but between losing and winning there is a very small margin in high competition and WTCR is very high competition. This margin is not easy to see from the outside but we can feel it and if we do a good job, we can extract a couple of tenths more or try to work it for a long distance. This is something only we know by trying to go deep into the understanding of the rubber. But it’s not something that is hugely different for the fans on TV to see a difference, of course not.”

The tyre has changed for 2020 but what about your Honda Civic Type R TCR?
“We know the car for two years and now it’s the third year of the car. In terms of improvement we have different packages, let’s say, for different types of circuits and we kind of know what goes for each circuit. We are more clear each time we try things, to know what should work in different circumstances and different tracks.”

What’s your Circuit Zolder knowledge like?
“Actually, I made my first podium in Europe in 2001 at Zolder. It was my third race I think in Europe in Formula Renault and I achieved my first podium by finishing second. After that I raced there in Formula 3 and my last race there was in Super League Formula so I have been there a few times. It’s not an easy track at all. There are a few chicanes and you need to carry the speed into the corner, you need the car to control well over the kerbs. It’s a very demanding track and a good challenge to start the season.”

The track has been resurfaced since you raced there. Does that concern you?
“The kerbs are the kerbs and I know they are still big because I have seen some onboards. We will see how the track is and if it’s less bumpy it’s probably better. I know some engineers from JAS have been there testing other WTCR cars so we have a lot of information to put in place before the weekend. I’m not too worried about that.”

Adria and Aragón are also new on the WTCR calendar for the first time in 2020. What do you know about these tracks?
“I’ve been to Adria! I was there in 2002 for my last race in Formula Renault in Italy but now the layout will change so it will be bigger but some of the track is still there so it will be tight. We were testing at Aragón in February and March so we have recent information from Aragón. It’s a great track with a bit of combination, long straights, tight corners, downhill braking and turning.”

What’s your view on the entry – a strong 20-car line-up and a lot of good drivers?
“Always the top 10 will be very strong and it was always very strong even when there were less cars in the WTCC. Every category the top 10 can challenge for the win and even more so in WTCR. Having said that I try to focus on extracting the maximum possible from each situation like last year. Last year was a very consistent year for me and that’s what I’m aiming for this year.”

The qualifying format has changed for 2020 with one qualifying only and the results of Q1 now deciding grid for Race 1. What impact will that have on strategy?
“It will be quite different with one qualifying and having Q1 involved in the starting grid for Race 1. It will be another part of qualifying where you have to take a lot of risks. Last year in Q1 you took it quite easy but this year you have to take big risks. This is something to see how each driver and team will have to compromise with this so it’s something to keep an eye on. We also have to consider the tyre and managing how you use them. It’s important because it’s one qualifying and three cuts.”

Following Zolder the focus switches to the Nürburgring Nordschleife, one of your favour circuits. How excited are you by that prospect?
“We have done some VLN [endurance races] there and we were there testing with WTCR. Every time you arrive at the Nordscheife, it’s like, ‘hello, here we are’, even if you already know it like I do. But every time you have to respect that track so much and it takes you something extra to go quick. Having been there three times this year it’s great because I already feel like I am one step ahead.”

Finally, having come so close to the WTCR title in 2019, how desperate are you to win in 2020?
“I am not less or more desperate than in previous years. I have the same ambition, the same will to go and do my best as possible. It is my third year with the team and I know they are behind every detail and that gives me a lot of confidence. ALL-INKL.COM Münnich Motorsport are working great and I feel we can deliver and we try to deliver like each time is the last opportunity. You don’t leave anything on the table, you try to extract the maximum in every situation, the same as we did last year. Between winning and losing is already a very tight margin. I will give everything and do everything possible in every situation. Hopefully the title comes but if it doesn’t come we will try again the next year.”