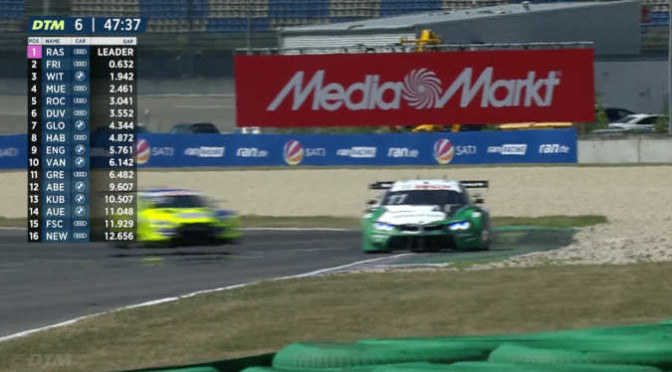 The newly created DTM Esports Championship powered by MediaMarkt is bringing virtual and real-world motorsport together. Six professional racing drivers from the top-class DTM and GT racing, three each from the ranks of the Audi and BMW works driver line-up, as well as 18 selected sim racers, will be competing in the first official digital race series from the DTM organization ITR. Three rounds and a Grand Finale have been scheduled for September and October. All events can be watched live with German commentary at ran.de, the sports platform of the DTM’s television partner SAT.1 and with English and German commentary on the streaming platform DTM Grid (grid.dtm.com). As a strong partner and holder of the naming rights, MediaMarkt has been involved from the outset.

Qualifying runs until 13th September. Anyone aged 16 and above who is interested is able to participate. The goal is to post the best possible lap time at three different race tracks. The 18 sim racers with the highest number of points qualify for participation in the DTM Esports Championship powered by MediaMarkt, staged in cooperation with RaceRoom Racing Experience. The two races of 20 minutes each are held every Tuesday from 19.00 hrs. The first round is on 22nd September, the second on 6th October and the third on 20th October, followed by the Grand Finale on 27th October.

BMW has nominated ex-Formula 1 driver Timo Glock (GER), young South African Sheldon van der Linde and Austrian Lucas Auer for participation in the DTM Esports Championship powered by MediaMarkt. DTM driver Fabio Scherer from Switzerland as well as Kelvin van der Linde (South Africa) and Mirko Bortolotti (Italy) line up for Audi. The duel between the highly talented brothers Sheldon van der Linde, who secured the first DTM victory for a South African in Assen on Sunday, and Kelvin van der Linde made it particularly spicy. In the battle for the drivers’ title, the six DTM drivers / Allstars will be up against the 18 top sim racers. In the battle for the teams’ championship, one professional driver and three sim racers will form a team.

With the start of the first official DTM Esports Series, MediaMarkt is becoming involved as a cooperation partner. Germany’s and Europe’s number 1 electronics retailer with over 850 stores in 13 countries have secured itself the naming rights of the new DTM Esports Championship powered by MediaMarkt including integration in the series’ logo. Additional presentation rights during the Grand Finale and Esports promotional rights, such as virtual track signage, round out MediaMarkt’s cooperation package.

» Quotes
„The DTM is a popular platform in motorsport that is becoming even more appealing with the inaugural official esports series. For us, virtual sports are absolutely in the centre of the attention. Therefore, the comprehensive cooperation concerning the new DTM Esports Championship powered by MediaMarkt suits our target group in an excellent way.“
Robin Cumpl, Head of Content MediaMarktSaturn E-Commerce GmbH
“For a while, virtual motorsport is having a remarkable boom. I am convinced that esports are showing a new and important perspective for our sport in line with the digital transformation. With the DTM Esports Championship powered by MediaMarkt, we have established our first official DTM Esports Series, a symbiosis of virtual and real-world motorsport of an extraordinary kind. I am really curious to see how the six professionals from DTM and GT racing will do in this area. It is great that we are able to welcome MediaMarkt as a strong partner into the DTM family. And we are delighted about the fact that our German broadcasting partner SAT.1 is presenting the DTM Esports Championship powered by MediaMarkt at ran.de.”
Marcel Mohaupt, Managing Director ITR GmbH