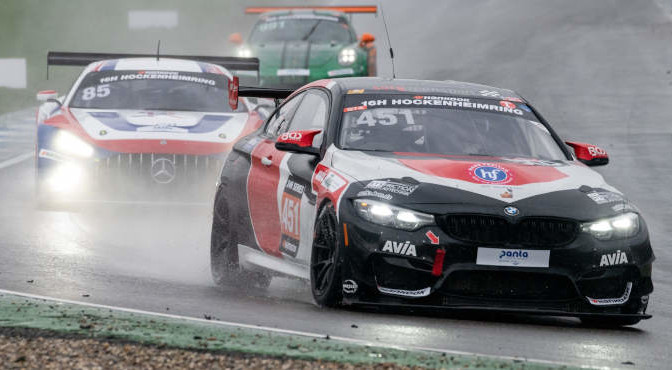 José Manuel De los Milagros secured one of his biggest achievements on the international scene with BMW M and Team Avia Sorg Rennsport to take GT4 class honors at the first edition of the Hockenheim 16 hours, which took place at the famous home of the F1 German Grand Prix. With a Team Avia Sorg Rennsport-entered BMW M4 GT4 and teaming up with German drivers Bjorn Simon, Olaf Meyer and Heiko Eichenberg, De los Milagros and his teammates completed a faultless race to beat their rivals to the win. Besides, Sorg Rennsport was classified third among the GT contenders behind two Porsche 991-II Cup and ahead of a Mercedes-AMG GT3.

The BMW M4 GT4 machinery already proved its top performance against its main contender in GT4, the ProSport-run Aston Martin Vantage AMR GT4. On Friday evening, De los Milagros and Eichenberg took qualifying duties and the Spaniard clocked a lap time of 1m50.672s, a mere seven tenths off the pole position. The first 8 hours took place on Saturday with Eichenberg making the first stint before handing over to Simon. Despite a puncture in the first hours, after three hours the BMW moved into the class lead and its rivals could never retake it. After Meyer, De los Milagros took the wheel with a first stint in tricky conditions as a result of a shower and the Spaniard remained on slick tires. In such changeable conditions, De los Milagros shone and become the fastest man on track when the track got dryer. The remaining eight hours took place on Sunday with the same driver rotation throughout the day. When De los Milagros was back in the car at the end, he posted the fastest lap of the GT4 class with a time of 1m51.156s, just three thousandths of a second quicker than Nico Verdonck driving the Aston Martin. After 16 hours of close racing, the BMW M4 GT4 completed 442 laps.

“It was such an amazing weekend! I feel extremely happy after our victory at Hockenheim. It was extremely challenging but our effort paid off. I would like to thank BMW M and Sorg Rennsport because they made an extraordinary work and are able to get the most out from me as a racing driver, and I like that. Of course, I would to extend my congratulations to my teammates as they drove very solidly and with no mistakes” said De los Milagros. The Spaniard underlined that “from a personal point of view I feel amazed after winning our GT4 class win, our third place overall in GT and my fastest lap beating a Verdonck, who is a world-class driver. Weather conditions were quite difficult on Saturday but I managed to avoid any mistake. On Sunday we fended off the Mercedes-AMG GT3 Evo 2020 to secure our third place in GT. It was a big step forward to clinch the title at Zandvoort in November. Keep pushing!”