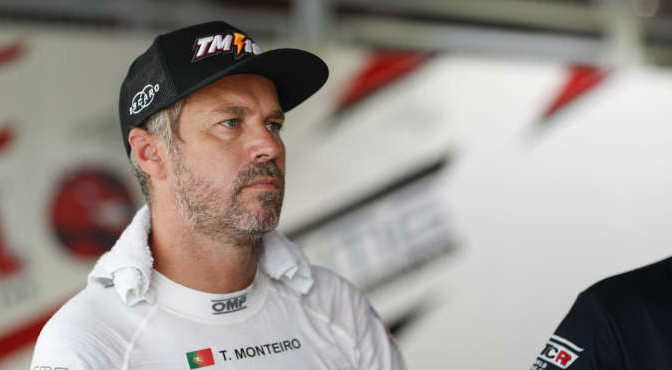 Comeback hero still powered by Honda but now driving for ALL-INKL.DE Münnich Motorsport *Portuguese sets his sights high ahead of 2020 WTCR – FIA World Touring Car Cup bid *Monteiro: “I don’t just want to be a number, I want to win the title”

With the 2020 season about to start how ready do you feel?
“I was born ready! Of course, I feel ready, we’ve been waiting long enough. If we are not ready now after six months when will we be? Seriously, it was a good preparation. Putting aside the three or four months when we were stopped, after that when things picked up again, we prepared well and did some very good testing. We worked hard on the specifics and now I’m very eager to start.”

You’ll be starting with a new team having joined ALL-INKL.DE Münnich Motorsport for 2020. How are you settling in?
“It’s always strange in a way because working with JAS for eight years or so, you get used to some habits, some procedures, some ways of working. When you change teams, even though I do that when I race at other events, you always have to get used to it. But it’s not like I’ve only been with JAS. It’s a proper change even though I’ve kept my race engineer, Nicola De Val, so it’s not a complete full change. The procedures of the team, the approach of the team is very different but it’s good and refreshing. I’m happy about this change and we can do a good job together.”

The team is expanding from two to four cars. Is that a good thing?
“There are a lot of advantages, there’s almost no downsides. We share much more information, we can have strategies, we can have plans, we work together to find performance. We push each other, we are all competitive and we all want to be first. We will fight with each other on the track but it will be more of an intelligent way to fight against each other. It’s much, much better to be in a situation like this, hopefully it will go well.”

It was a long wait for the season to start, what has it been like?
“It’s very unusual circumstances and unique for everybody and everybody has to get used to this new reality, the new formats, new systems. We have to minimise the difficulties and it was a little bit the same in our preparations. There were a lot of unknowns for many months, not knowing how long it would take and when it would start. Then when we got the calendar your mind has a shift and you start to focus in a different way. You start to prepare yourself physically and mentally for the challenge. It’s going to be a special and unique season, very compact, a very short season. You need to be good and strong straight away. It will be very demanding and a very different approach.”

How are excited are you about the prospect of racing again?
“I’m excited to be back after many months of unknowns. You start to get those itches to get back, we have done our job in terms of preparation, we’ve done our testing, we’ve had lots of meetings and done lots of analysis. We’ve been discovering the new tyres and adapting the car. We have done the best preparation we could have done. Could we have done more? Yes, you can always test more but I’m happy enough with what we have done. But the others haven’t been waiting at home so I’m not underestimating their power. I’m just very motivated and very eager to go.”

What are you aiming for this year?
“I start the season with the goal of fighting for the championship. I wouldn’t be here and I wouldn’t make this extra effort just to race. I’ve raced for 24 years now and been in [World Touring Cars] since 2007. I love it but I don’t just want to be a number. I really want to win the championship because I still feel it was robbed from me in 2017 so I will do anything I can to be champion.”

You won’t get the opportunity to race at home this year. What message do you have for the Portuguese fans?
“That’s a big blow for sure. It’s always an amazing experience to race in front of my home crowd in Vila Real. It will be missed and it will be sad not to go there but we all understand it is a very peculiar year and we have to accept that and do the best we can. I will miss a lot not going to race in Portugal but we promise we will be back. COVID-19 permitting we will be back in Vila Real next year. I have spoken to Mayor Santos recently and the promoters of the race are all very eager the WTCR goes back there.”

What’s your knowledge of Zolder like, the venue of the opening WTCR Race of Belgium?
“The last time I was there was two years ago when I was still evaluating my possible comeback. I had a small test with Tom Coronel and Benjamin Lessennes. They were there to help me assess my level and my performance and support me. It was still a bit early in my recovery because my eyes were not very well aligned, but it was interesting, even though it was wet, damp and very slippery. I did World Series by Nissan there in 2004 and I won both races against Heikki Kovalainen. I also had a podium each year we went there with WTCC in 2010 and 2011. I would describe it as a very small Spa and I really like the flow of the track activity.”

Even though you’ve not been racing, some of the drivers you look after through your Skywalker Management company have been and they’ve also been winning. How good has that been?
“It’s very exciting and very motivating but it puts a lot of pressure on me and we joke about it! António Félix da Costa is a world champion in Formula E, my son is leading the karting championship in Portugal and won his last race, Benjamin Lessennes won three races in French GT4 a few weeks ago. A lot of my drivers have been very successful, which is amazing. It takes a lot of hard work to manage drivers so it’s rewarding when they have success like this. It gives me a lot of joy, some pressure but positive pressure and I want to show who is the boss still!”

Finally, if you don’t win the WTCR title this year who will?
“That’s a very tricky one. It’s very difficult to pin-point one person who could win because there are seven or eight drivers who could win the championship. My money will be on Esteban, Muller, Tarquini, Michelisz and I can’t put aside Björk, Catsburg, Néstor… It’s difficult but if I had to choose one it’s me!”