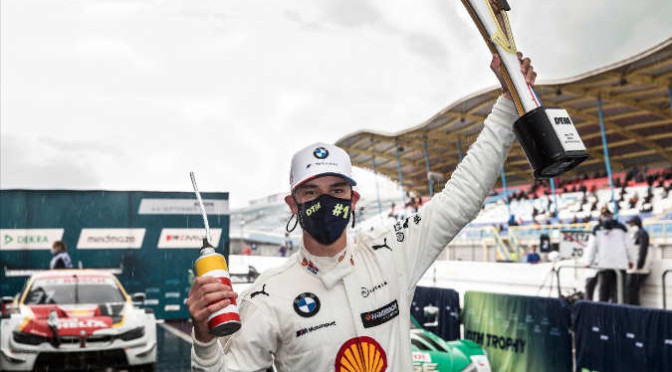 Two maiden victories on one weekend: on Saturday, Dutchman Robin Frijns (NED, Audi) celebrated his first-ever DTM race win at his home circuit in Assen, on Sunday, Sheldon van der Linde secured the first DTM race victory for a South African. The only 21-year-old BMW driver won the race thanks to clever tactics by his RBM team and courtesy of his driving skills on the soaked asphalt that gave many of his opponents a hard time. After a disappointing qualifying, van der Linde had only started the race from 14th on the grid, emphasising the young driver’s outstanding performance even more. In a turbulent race, Frijns came home as the best-placed Audi driver. Points’ leader Nico Müller (SUI, Audi) rounded out the podium and remains in the lead of the drivers’ standings. The spectators who had made the trip got to see a highly entertaining race marked by numerous position changes, a temporary stoppage of the race and a new start behind the safety car.

Qualifying having still been held in dry conditions, heavy downpours fell on the TT Circuit that completely soaked the track. All drivers opted for rain tyres as a result. Due to the weather conditions, race control had imposed two formation laps behind the safety car. For the standing start at the dry asphalt, pole sitter René Rast (GER, Audi) lacked the necessary grip to remain in front. Loïc Duval (FRA, Audi) handled it considerably better and immediately took the lead. Robin Frijns went past as well and claimed second place.

Out in front, however, things were soon getting close for Duval. Robin Frijns was the first to get past and later on, the Frenchman lost further ground to Rast, Müller and Timo Glock (GER, BMW). The latter, having started eighth, did very well with his BMW M4 DTM in the wet. While Frijns was able to extend his lead, Duval dropped back further. Van der Linde’s RBM team, meanwhile, opted for an early stop to put fresh rain tyres on. That eventually turned out to be the key to victory as the opposition from Audi, led by Frijns, Müller and Rast, made its pit stops considerably later. In the meantime, van der Linde pushed with fast laps so that he could just stay ahead of Frijns as the latter rejoined the race.

Soon after that, there was a heart-stopping moment for the fans in the grandstands as rookie driver Fabio Scherer (SUI, Audi) had a massive shunt in the fast Ramshoek section. His WRT team had put on slick tyres, a risk that proved to be too high in the conditions. Debris on track and damaged tyre stacks were the reason the race had to be stopped. Scherer escaped unscathed from his Audi RS 5 DTM, but the race was over for the young Swiss. Out in front, van der Linde made no mistakes at the rolling restart and commandingly defended his lead until the finish. Frijns and Müller tried everything but posed no threat to the BMW driver as the rain set in again. Van der Linde’s victory goes down into DTM history as the first-ever win by a South African. For the RBM team, it was the tenth victory in the touring car race series.

Prior to the ninth race of the season at the Nürburgring Grand Prix circuit (12-13 September), Nico Müller remains in the lead of the drivers’ standings at 164 points. After his win on Saturday, Robin Frijns remains second at 138 points and is 18 points ahead of third-placed René Rast.
» Quotes – race 2, Assen
“This year, the DTM provides excitement at the highest level and this race weekend at Assen was no exception: with Robin Frijns and Sheldon van der Linde, two young and talented drivers climbed onto the top step of the podium who had already frequently shown their speed and for whom the maiden win only was a matter of time. Now, we have already had five different winners from the first eight races of the season and it is great to see young talents making it onto the podium as well. This reflects the huge driving potential of the DTM and also shows how close the racing is. This time, the weather provided additional drama. In the process, van der Linde not only benefited from his impressive speed, but also from the clever tactics with an early pit stop. For me, Assen was a special experience as spectators were able to watch the races live on site again as well. Now, I hope for all of us that this can be possible more often again.”
Gerhard Berger, chairman, ITR e.V.
“A dream has come true. Winning the race after having started from 14th on the grid is actually unbelievable. It shows that simply anything can happen in the DTM. Of course, the weather helped us as well. Huge thanks to the entire team and to BMW. Our crew has done a tremendous job, the car handled really well. Assen is a good track to test the limits, something that worked out very well here. The restart was a bit tricky, but we were in control throughout. I am overjoyed.”
Sheldon van der Linde (RSA), BMW, winner
“From my perspective, everything went quite well. The first two or three laps, I was having some difficulties in getting the tyres to the right temperature. Then, I found a good rhythm and the balance was good, too. Until the pit stop, everything went according to plan. That I then rejoined the race behind Sheldon van der Linde, was not what we had planned, of course. After the restart, it was very wet, so that I didn’t start any risky manoeuvres in order to bring second place home.”
Robin Frijns (NED), Audi, 2nd place
“A very entertaining race, not just for the spectators, but also from the driver’s perspective. The start was really good, but the first laps weren’t. Driving behind in the spray is tough, you can hardly see anything. After I lost positions, I was able to stabilise. BMW played it well with the tactics of the early pit stop, that paid off. Even though we were unable to get the maximum out of it today, it was a good recovery. My appetite for the next victory is getting bigger.”
Nico Müller (SUI), Audi, 3rd place
» Results – race 2, Assen
01. Sheldon van der Linde (RSA), BMW M4 DTM, 31 laps in 1h 13m 27.930s
02. Robin Frijns (NED), Audi RS 5 DTM, + 2.621s
03. Nico Müller (SUI), Audi RS 5 DTM, + 3.658s
04. Loïc Duval (FRA), Audi RS 5 DTM, + 9.414s
05. René Rast (GER( Audi RS 5 DTM, + 9.455s
06. Timo Glock (GER), BMW M4 DTM, + 9.870s
07. Ferdinand Habsburg (AUT), Audi RS 5 DTM, + 11.048s
08. Marco Wittmann (GER), BMW M4 DTM, + 11.666s
09. Philipp Eng (AUT), Audi RS 5 DTM, + 12.436s
10. Lucas Auer (AUT), BMW M4 DTM, +13.033