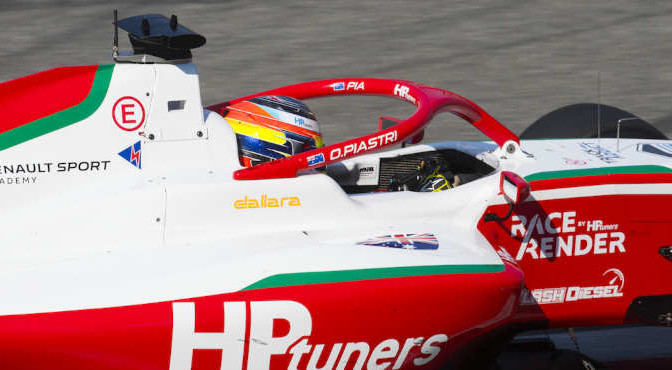 A race that started with huge expectations turned into a nightmare for PREMA Racing today at Monza. After yesterday’s Race 1, and the double podium finish that allowed the team to clinch an early title, Race 2 of the FIA Formula 3 Championship ended up with three retirements.

It all started well with Oscar Piastri, Frederik Vesti and Logan Sargeant making gains in the early stages. Unfortunately, the Australian was punted out of contention when two rivals collided. At that point, Sargeant was full steam in recovery mode after being spun yesterday and had moved up from P26 on the grid to P4 right behind Vesti.

Unfortunately, it went all sideways with four laps to go, when the American and the Dane made slight contact under braking at the Ascari chicane which was enough to send the American through the gravel with a punctured right rear tyre. With a broken front wing, Vesti was stopped with a black and orange flag and soon came back to the pits.

With one round to go at Mugello, the team looks forward to a smoother run in the 2020 season decider.

“The race ended in some contact. Obviously, not what I was looking for. It started well, me and Frederik were fighting for third and then I just got taken out by Novalak in turn 1. There was nothing I could have done. It’s unfortunate, but it happens every now and again. For sure it’s annoying in this position. We’ve got to move on, nothing we can change about it. Heads up for Mugello where we will try to win the championship.”

“We had a very good race from P10 coming all the way to P3 with quite a good pace in the car. However, the tyres were already struggling a lot, and I’m not sure exactly what was going on, especially with the front ones. That really compromised us in mid to end of the race. I was fighting to keep my position when the contact happened. It’s a shame because we could have gained a lot of points. But anyway, it has been a strong weekend, and I showed everything I needed to show. Thank you Prema for that, and see you in Mugello!”