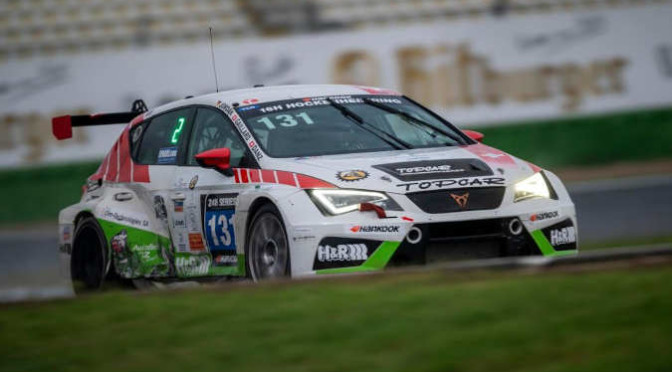 TOPCAR Sport is your current TCE leader at the Hankook 16H HOCKENHEIMRING, but was lucky to survive a bizarre incident with AC Motorsport on the run down to turn one at the start of the race.

The TOPCAR Sport CUPRA TCR (#131, Fabian Danz / Karen Gaillard / Kai Jordan) and the AC Motorsport Audi RS3 LMS (#188, Stéphane Perrin / Vincent Radermecker / Mathieu Detry) made contact across the start-finish line as the green flag was being waved, sending both into the run-off area before either had even reached the first turn. The collision immediately brought out the Code 60 caution flags and left the Audi with a front left puncture and a heavy dent in the driver’s side door. Though undamaged, further bad luck befell Fabian Danz in the TOPCAR CUPRA, who was unable to pass Vincent Radermecker in the crippled Audi under purple flags as the pair limped back to pitroad.

Solid running and an alternative strategy means TOPCAR Sport now leads the TCE field at the halfway point of the Hankook 16H HOCKENHEIMRING, the CUPRA TCR having completed 221 laps of the 4.574km Hockenheimring en-route to the chequered flag.

The Red Camel-Jordans.nl CUPRA TCR (#101, Ivo Breukers / Luc Breukers / Steven Liquorish) which, like AC Motorsport, is in contention for the TCE crown in both the 24H SERIES Europe and 24H SERIES Continents, had run as high as 2nd in the early going, aided by a mega stint from Ivo Breukers, who completed more than half an hour on a wet track on dry slicks. The Dutch team though lost more than an hour in the pits to drivetrain problems, which has since dropped the CUPRA to the tail of the TCE division.

After the traditional overnight intervention, the first-ever Hankook 16H HOCKENHEIMRING will resume racing tomorrow from 12.00 hrs local time tomorrow, Sunday 6 September. After the final eight hours of running, the chequered flag will fly at 20.00 hrs.

Live streaming of the race in HD quality will be available on our official website and the 24H SERIES YouTube channel. Regular updates will be published on Twitter (@24HSeries), Facebook (24H Series) and Instagram (24H Series). Further information can be found at 24hseries.com/races/16h-hockenheimring-2020.