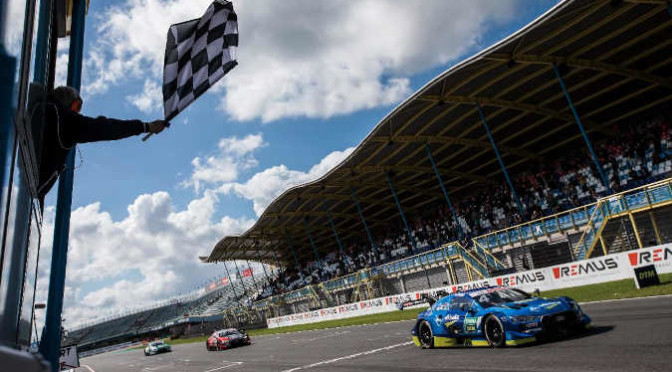 A maiden win that was overdue: in front of his home crowd, Robin Frijns secured his first-ever DTM victory. In the first race of the season for which spectators were allowed in again, the 29-year-old from Maastricht delivered the first DTM race win by a Dutch driver since Christijan Albers at Estoril in 2004. Frijns, who had been unable to convert already four pole positions into his maiden win so far this year, came out on top in a thrilling three-way battle in the race on Saturday in which he had started from second on the grid. Until the finish line, his rivals Loïc Duval (FRA), who had started from first pole position, and points’ leader and young family father Nico Müller (SUI) were right behind him. Only nine tenths of a second separated the Audi trio in the first three places. The spectators in the grandstands along the main straight, who were admitted in again for the first time this season, celebrated their fellow Dutchman Frijns with standing ovations.

Prior to Sunday’s eighth race of the DTM season (live on SAT.1 from 13.00 hrs), Nico Müller remains in the lead of the drivers’ standings at 149 points. With his victory, Frijns has moved up into second with 119 points, defending champion Rast has dropped to third with 107 points.

The starting grid procedure for the seventh race of the season was celebrated in front of spectators for the first time again this season and the joy was massive at both sides, among the drivers just as well as among the spectators. Prior to the start, there was uncertainty concerning the tyre strategy: not just that there had been a downpour over the TT Circuit just after qualifying and there were still several wet patches, the asphalt in Assen that had only been replaced in February also caused uncertainty as to the right tyre strategy. All drivers eventually started with slick tyres and the one-stop strategy turned out to be the correct choice.

Pole-sitter Duval had a good getaway from first on the grid and did everything right at the front of the field while Frijns initially ran behind Ferdinand Habsburg (AUT, Audi). The Austrian had made an excellent start from fourth on the grid, but lost ground as the race went on and eventually had to make do with eighth place. Duval, meanwhile, defended his lead, but saw Frijns increasingly large in his rear-view mirror. With seven laps remaining, the local hero made the decisive move and moved up into the lead. Duval followed closely behind with Müller on his tail, so that Frijns had to work had to defend his lead until the finish.

After the double success in the Sunday race at Lausitzring a fortnight ago, the BMW armada now had to take in a setback. South African Jonathan Aberdein was the best-placed BMW driver in sixth from his compatriot Sheldon van der Linde. Timo Glock (GER, BMW), who shone with a great second-place finish at Lausitz, now had to make do with ninth place. Fellow BMW driver and ex-Formula 1 driver Robert Kubica (POL) scored his first DTM championship point by finishing tenth. Last year’s Assen race winner Marco Wittmann didn’t get his weekend at the track off to a good start and only finished 14th having been tapped into a spin.
» Quotes – race 1, Assen
“It took me three years to score my first DTM win. I have been close a couple of times and I frequently had the feeling that I had the pace to pull it off. But something always got in my way. I have scored a few podium finishes. But now I am really happy that it happened here at Assen where, finally, fans were admitted into the grandstands again. It couldn’t have happened at any better place than here at Assen.”
Robin Frijns (NED), Audi, winner
“Of course, it is disappointing to have been leading the race for so long and then only end up second. We were a bit uncertain with our strategy. Perhaps we made our pit stop a little bit too early. Otherwise, I perhaps could have kept Robin Frijns behind me for one or two more laps and the outcome could have been different. At the end, I still had something left that enabled me to close up again, but closing up and overtaking are two different things. At the end of the day, it was a mix of various elements. But the performance is okay and on Sunday we will do our outmost to get even better.”
Loïc Duval (FRA), Audi, 2nd place
“There were many surprises in the race. Of course, I hoped to defend my third place on the grid. In the first corner, it was a bit slippery so that I lost positions. As to the tyres, I had expected two stops, but one turned out to be enough. That was a surprise indeed. Running in third place after my stop, I had the problem that Loïc in front of me was able to use DRS as well to attack Robin. Eventually, that was the decisive problem. However, I am really happy for Robin and for the team, of course.”
Nico Müller (SUI), Audi, 3rd place
» Results – race 1, Assen
01. Robin Frijns (NED), Audi RS 5 DTM, 36 laps in 53m 45.729s
02. Loïc Duval (FRA), Audi RS 5 DTM, + 0,505s
03. Nico Müller (SUI), Audi RS 5 DTM, + 0.950 s
04. Mike Rockenfeller (GER), Audi RS 5 DTM, + 3.188s
05. René Rast (GER), Audi RS 5 DTM, + 13.735s
06. Jonathan Aberdein (RSA), BMW M4 DTM, + 26.768s
07. Sheldon van der Linde (RSA), BMW M4 DTM, + 31.336s
08. Ferdinand Habsburg (AUT), Audi RS 5 DTM, + 31.604s
09. Timo Glock (GER), BMW M4 DTM, + 36.888s
10. Robert Kubica (POL), BMW M4 DTM, + 43.576s