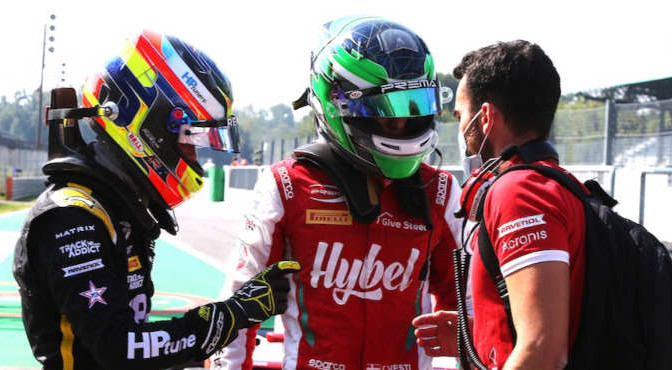 PREMA Racing took a stunning double podium finish in race 1 at Monza, home to the penultimate round of the FIA Formula 3 Championship for 2020. Frederik Vesti cruised to his second win of the year, while Oscar Piastri ended a monumental recovery in third place. PREMA Racing also mathematically clinched the team championship with three races to go.

Vesti delivered a spectacular run from the 10th position on the grid. Finally running on a track he knew from his previous racing endeavors, the 18-year-old Dane showed his full potential, posting fast laps and providing bold moves. He then made the most out of a mid-race safety-car to seize the lead and sail to victory.

On the other hand, the safety-car provided opposite fortunes for the other PREMA Racing drivers. Oscar Piastri first got the nod of teammate Logan Sargeant in a tight battle, then surged to third place, again pulling stunning moves in the process. The 19-year-old Australian gained 12 positions from P15 on the grid and secured valuable points for the championship.

Sargeant had a positive start but lost positions and eventually fell into the clutches of both his teammates. While he was able to recover enough to gain a potential front row placing for race 2, he was punted off by another driver at the Roggia chicane. He eventually ended up in P26.

“Third from 15th on the grid, it was a very good race. I think I made a lot of good moves, but I didn’t really rush any, they were all calculated, picked the right moment. The late safety car helped us quite a bit. Third is awesome from where it started, and I’m looking forward to tomorrow. Seven spots ahead of today, let’s see what we can do.”

“It feels great to win, especially because we came up from P9. It has been a crazy race with great overtakes and a lot of things happening. I would like to thank Prema and congratulate everyone on winning the team championship. I’m very proud to be a part of that, and I think we have done a good job improving during the whole year. That’s the reason why we are team champions and won today from P9. I’m really happy and looking forward to tomorrow. We are starting from P10 and our goal is to score good points to fight for the third position in the championship.”

“Race 1 was not quite what we hoped for, there’s actually not much to say. It wasn’t the greatest race from my side, and I got taken out in the middle of it. Definitely not our ideal first race of the weekend, but it is what it is. We‘ll move on.”