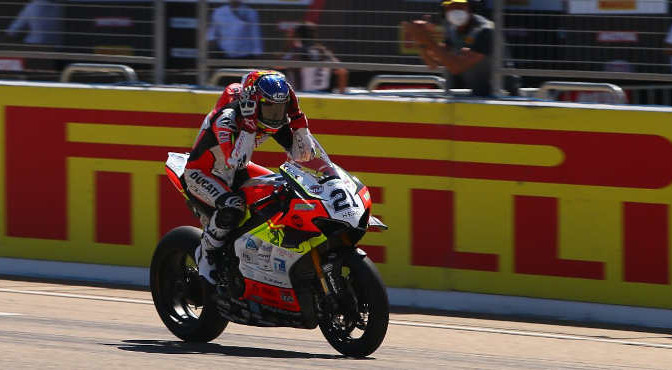 A new face stepped on top of the MOTUL FIM Superbike World Championship podium as Michael Ruben Rinaldi (Team GOELEVEN) claimed a sensational maiden victory in Race 1 for the Pirelli Teruel Round at MotorLand Aragon. Rinaldi had started from second on the grid and had topped all three Free Practice sessions as he continued his impressive pace.

Despite appearing to get a bad start, Rinaldi held second place on the opening lap but used the straight line speed advantage of his Ducati machine to pass Jonathan Rea (Kawasaki Racing Team WorldSBK) on the run to Turn 16 on the opening lap and from there, he did not look back; lapping consistently faster than the reigning Champion.

Rea finished the race in second place, almost six seconds behind Rinaldi but the 20 points gained on Championship rival Scott Redding (ARUBA.IT Racing – Ducati), with Redding crashing out on Lap 7 while under pressure from Alvaro Bautista (Team HRC), means the five-time Champion is now 30 points clear of Redding.

Redding’s ARUBA.IT Racing – Ducati teammate, Chaz Davies, claimed a podium as two Ducati machines finished in the top three. Davies was in a battle for third with Bautista before the Spanish rider crashed at Lap 14 on Turn 14 and retired from the race. Michael van der Mark (PATA YAMAHA WorldSBK Official Team) finished in fourth place for the 18-lap race as the lead Yamaha rider, one place ahead of teammate Toprak Razgatlioglu.

Maximilian Scheib (ORELAC Racing VerdNatura) was the last classified rider in 16th place after an incident in the early stages of the race, with Bautista and Redding not completing the race alongside Roman Ramos (OUTDO Kawasaki TPR), Marco Melandri (Barni Racing Team) and Sylvain Barrier (Brixx Performance) also not retiring from the race.

P1 Michael Ruben Rinaldi (Team GOELEVEN)
“It’s unbelievable! I’m very happy but I don’t know how to explain this emotion right now. It was a difficult year last year but this year I’ve found a family. Always I’ve had some people behind me who support me in difficult times. Now we are here! I couldn’t hope for a better race and I will enjoy this.”

P2 Jonathan Rea (Kawasaki Racing Team WorldSBK)
“I did my best. Yesterday, I tried a long run with the soft tyre and we made it work to the end but something in my head was telling me it was too much of a gamble. When I saw Michael and his pace, with the SCX tyre, the rhythm he could do was incredible. Maybe tomorrow we could do a more aggressive strategy but super happy to pick up 20 points. I feel like we got the best out of the bike today.”

P3 Chaz Davies (ARUBA.IT Racing – Ducati)
“I was so undecided; I don’t think I’ve ever been so undecided on the grid over a tyre choice. It was just at that cut off temperature where the SCX tyre starts to work. In any case, it was a risk. I knew Alvaro was going to run it and I knew Michael was going to run it. With their size and weight being a lot less, I think it’s an easy decision for them whereas for me it was a bit of a roll of the dice. In some ways it worked, in other ways it didn’t. We have to evaluate how to improve our package to make better use of that tyre tomorrow if we’re going to run it. Overall, I’m satisfied. It was a tough race, conditions were really different compared to last week. Really hot, really greasy. Happy to be on the podium! Congratulations to Michael Ruben Rinaldi, he rode awesomely and absolutely disappeared. No one had an answer for him. He’s been somewhat of a little brother in the Aruba Ducati fold in the last few years, so the annoying little brother has come into his own!”
#TeruelWorldSBK at MotorLand Aragon – Race 1.