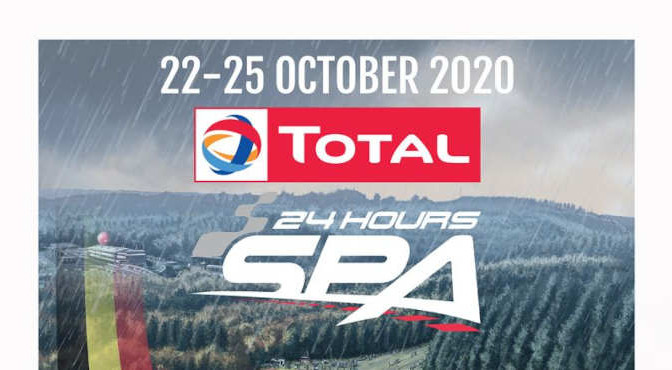 The third and final poster celebrating this year’s Total 24 Hours of Spa has been revealed to mark the 50-day countdown to the start of the Belgian endurance classic (22-25 October).

This year’s race will get underway at 15.30 on Saturday 24 October, having shifted from its traditional July date due to the COVID-19 pandemic. Created by renowned illustrator Guillaume Lopez, the latest design depicts Spa-Francorchamps under heavy rainfall, acknowledging the legendary 7km venue’s famously unpredictable weather. It follows previous editions showing the track in daytime and during the night hours.

The ability to remain composed in the face of fast-changing conditions is a crucial aspect of the challenge facing competitors at Spa. Though the thunderstorms seen at recent editions are less likely during late autumn, the weather will nevertheless remain a key aspect of this year’s contest.

As well as the 50-day countdown, the poster also coincides with official confirmation that next year’s Total 24 Hours of Spa will return to its rightful slot at the end of July following the one-off move to October.

Race week in the Ardennes will begin on Monday 25 July, while track action kicks off on Thursday 29 July. The race will commence on Saturday 31 July and finish 24 hours later on Sunday 1 August, making next year’s twice-around-the-clock contest the first since 2010 to culminate in August.

Running from 22-25 October, this year’s Total 24 Hours of Spa will represent the sixth round of the GT World Challenge Europe Powered by AWS season, as well as the third event on the Intercontinental GT Challenge Powered by Pirelli calendar.

Both series will undertake one further long-distance event before launching their assault on the marquee race: GT World Challenge Europe stages a six-hour contest this weekend at the Nürburgring (5/6 September), while Intercontinental GT Challenge will tackle the inaugural Indianapolis 8 Hour on 2/4 October at Indianapolis Motor Speedway.