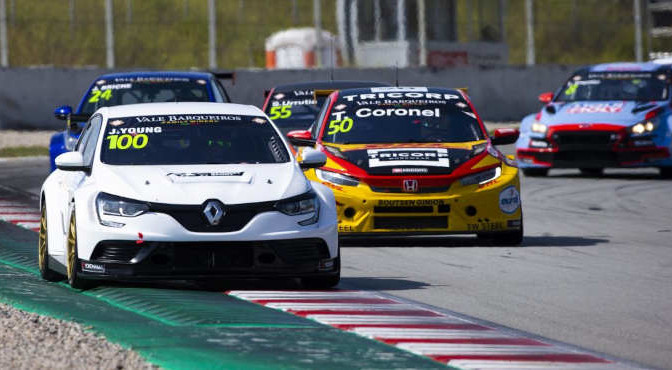 Using the new Renault Sport-approved Mégane RS TCR*, Switzerland-based Vukovic Motorsport has been designing, building and preparing race-winning cars for more than 20 years under the guidance of its founder and successful racer Milenko Vukovic.

In 2019 it embarked on a TCR Europe campaign and recruited Jack Young for the Circuit de Barcelona-Catalyuna rounds last September. Despite his absence of car and track experience, the then 17-year-old scored a brace of fourth-place finishes and was soon signed by Vukovic Motorsport for the 2020 season.

Young, now 18, and from Belfast in Northern Ireland, won the Renault UK Clio Cup in 2019. He will be eligible for the FIA Rookie Award and WTCR Trophy for independent racers and is the youngest all-season WTCR driver.

Europe-only calendar appeals to Vukovic
“From the beginning of our project it was our target to compete in the WTCR,” said Milenko Vukovic, whose team took advantage of the re-opening of WTCR entries for a limited period earlier in the summer. “Because of the pandemic and the fewer race weekends that are all here in Europe, it made sense for us to go to WTCR this season.”

Target set for 2020
“We want to consistently deliver good results throughout the whole season,” said Vukovic. “We know the competition in the WTCR is very high, but our whole team has worked very hard to stay competitive. We are very excited to bring the Renault brand to the WTCR – FIA World Touring Car Cup for the first time.”

Young a key asset for WTCR newcomer
“Jack proved last year that he can fight with the frontrunners with our car,” Vukovic said. “Since last year he is our official driver and did all the development testing with our current specification Mégane RS TCR.”

Rapid progression just reward for teenage talent Young
Jack Young admits his progression from single-make champion in the UK to WTCR driver has come faster than he expected but insists he’s ready for the challenge ahead. “I’m 18 and I was initially focused on TCR Europe. But when Renault stepped forward with a plan for WTCR I didn’t need to think twice. But I feel no pressure and I know that this will be a fantastic learning experience. I just want to go in there, push, push, push and see how far I can get.”

Aged 18 and racing in WTCR. Can you believe this is really happening?
“Everything has just developed so quickly from winning the Clio Cup in the UK to driving a TCR car in Barcelona. That was a fabulous experience and I was really happy to show the potential in the Renault. The plan then was for a full season in TCR Europe this year. But circumstances prevented that, obviously. However, when one door closes, another opens and suddenly the possibility to step up to WTCR with the new Renault from Vukovic Motorsport came along, I jumped at the chance.”

You can at least count on some TCR knowledge. How important will that be?
“We went to Barcelona to develop the car basically but we managed to pull two great results out of that, two fourths. That was very good and turned a lot of heads and also gave me a lot of confidence going into this year because, in Barcelona, I was racing against some very experienced drivers. It has given me a lot of confidence for this season.”

Given your young age and relative lack of experience, are you under pressure?
“Age won’t be a factor on the start line. I’ve been racing against people who are much older than me for my whole career so I’m used to being the ‘new kid’. I realise that I’m on a steep learning curve but I’ve shown that I can learn quickly.”

What would be a good result in your eyes?
“My aim is simply to do the best I can, to gain as much experience as I can and to enjoy the championship. We’re confident with the car, we’ve been developing the car and it’s fast. We’re going in with high hopes.”

How big was the step up from the Renault Clio to the Renault Mégane?
“It’s massive, it’s just a completely different car and then you have the speed factor as well. But the new tracks and the new people we will meet all become a factor. It’s just massive experience for me, pretty amazing really, and I’m loving it so far. I can’t wait to get on the start grid.”

Where does your interest in motorsport come from?
“My dad, Philip Young, rallied. He was a works driver for Ford but he stopped because he had to have me! The Clio idea came from watching Colin Turkington, the BTCC driver and a family friend, on TV. We saw the Clio Cup and thought it would be amazing if we could do that.”

How did you get started?
“I actually started on quads at the age of six and then started karting at the age of nine. I won my first race and then my first championship in Northern Ireland. Then I moved to England and won the British, Irish and Northern Irish titles in the same season. We continued but there was so much work from school and the money became a bit of a factor so we had to pull out. But then we came back to Clio Juniors and here we are today.”

What happened when you switched to racing Renault Clios?
“I won Clio Juniors in my first year in cars in 2017. I then did half a year in the Clio Cup because of my school exams. At the end of 2018 I won the Clio International title, which was a big achievement, probably my biggest result to date. It also gave me a lot of confidence going into the 2019 season. We had a tough battle but managed to come out on top. I had the support of Mike Ritchie, my race engineer, a magician when it comes to delivering a race-ready car and one of the best mechanics out there. He has made me who I am today as a driver.”

Had you planned a fourth season racing Renault Clios rather than jumping to WTCR?
“Going into the 2019 season there weren’t a lot of people on track but the people that were on track were very competitive and were experienced from previous years. I was going up against them as this newcomer and I knew I had to pull out all the stops. I was delighted to be at the front of the field straight away. I always go into a championship and go into a race with a plan to win it.”

What do you know about and what do you think of your WTCR rivals?
“I’ve been watching World Touring Cars for a few years now so I know of all these big name-named drivers I’ll be lining up alongside. It is so exciting that I’m going to be racing against them this year.”

Finally, you recently got the chance to try out the Nürburgring Nordschleife, venue for WTCR Race of Germany. What was that like?
“Unbelievable. I want to go back, actually I want to move out there! I said to my Dad, ‘I’m moving to Germany!’ I love it so much, the atmosphere is amazing and the track is like nothing else and I can’t wait to race on it.”

*The use of the Renault Mégane RS TCR in the 2020 WTCR – FIA World Touring Car Cup is subject to the completion of all technical processes mandated by WSC, the organisation behind the TCR concept and trademark, including the issuing of the WTCR Technical Passport.

Photos: With thanks to Jakob Ebrey Photography and TCR-series.com.