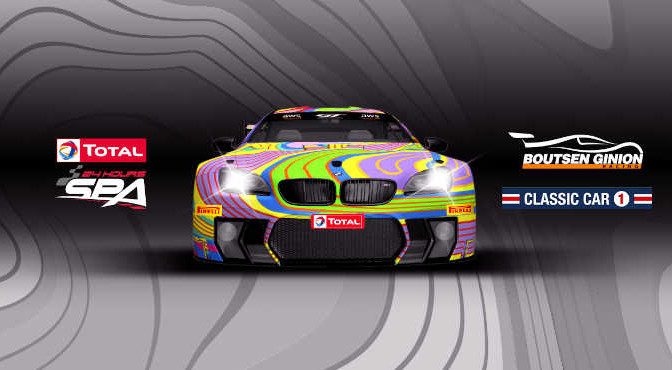 The design pays homage to the BMW Art Car concept, a rich tradition that began in 1975 with a collaboration between French driver Hervé Poulain and American sculptor Alexander Calder.

The project reimagined the car as a canvas, challenging the artist to rethink his creative approach for an entirely new medium. It has since been followed many times, with the likes of Roy Lichtenstein, Andy Warhol, Jenny Holzer and Jeff Koons among those to add their own interpretation.

Boutsen Ginion Racing will join the art car movement following a proposal from gallerist Alain Noirhomme, who commissioned Peter Halley to create a unique aesthetic for the Belgian squad’s BMW M6 GT3. The acclaimed artist was a central figure in the neo-conceptualist scene that sprung up in New York City during the nineteen-eighties, with his work often featuring neon-coloured geometric images.

This style will be central to the final livery, ensuring that Boutsen Ginion Racing is an unmissable presence at this year’s Total 24 Hours of Spa. The twice-around-the-clock contest is particularly special for the proud Belgian outfit as it competes against an international field at the country’s biggest endurance race.

The marquee round for GT World Challenge Europe Powered by AWS and Intercontinental GT Challenge Powered by Pirelli, this year’s Total 24 Hours of Spa will see the long-running race staged in October for the first time. The full livery for Boutsen Ginion’s BMW will be revealed to the world during the event’s official test days, which will take place at Spa-Francorchamps on 29-30 September.

Alain Noirhomme: “I have known Peter Halley since I first visited his New York studio in 1992 and represented his work in Belgium until the sale of my gallery in 2013. When I asked if he would like to take on the challenge of designing a race car, the answer was an instant yes! Peter knew all about the BMW Art Car project and is a friend of Frank Stella, who designed an Art Car in 1976. The whole Boutsen Ginion team has also given its full commitment and we are very honoured that Peter has been so involved. He devoted an unimaginable amount of time to it, but the final result is thanks to his immense talent. We look forward to welcoming him at this year’s Total 24 Hours of Spa.”

Peter Halley: “When my former gallery owner Alain Noirhomme made this proposal, I didn’t have to think for long before accepting. The project has pushed me to rethink my way of working and represents a new challenge. I am delighted that the car will be at the Total 24 Hours of Spa and look forward to following this year’s race.”

Olivier Lainé, Boutsen Ginion Racing: “Alain Noirhomme’s proposal to have our BMW M6 GT3 decorated by an internationally renowned artist instantly appealed to me as an original project with a lot of promise. The Total 24 Hours of Spa is particularly important to our team and undertaking this adventure with our BMW has been something very special. This year, the least we can say is that our car will attract a lot of attention!”

This year’s Total 24 Hours of Spa represents the seventh round of the GT World Challenge Europe Powered by AWS season, as well as the third stop on the Intercontinental GT Challenge Powered by Pirelli calendar