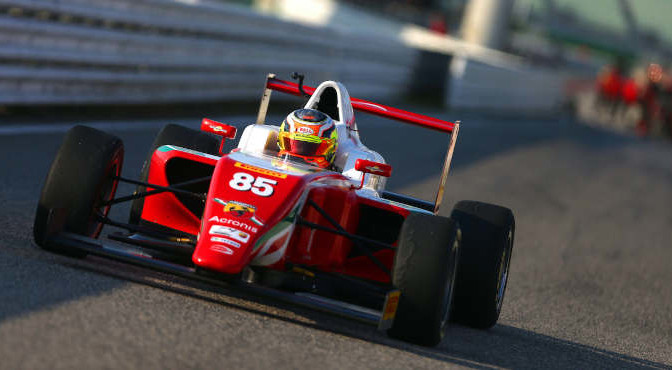 PREMA Powerteam faced a challenging weekend at Imola but still came away from the tough Italian venue with positive results and good feedback ahead of the next few rounds. The team scored multiple rookie podiums including a rookie win with Dino Beganovic as the drivers gained valuable experience.

Beganovic started his weekend with a bang taking pole position for race 1 in qualifying, but contact in the early stages and the resulting damage forced him to cross the finish line in fourth place. In race 2, he was fourth overall again and took second place among rookies, before eventually losing ground due to attrition in race 3.

Hampered by the timing of the full course yellow situations in qualifying, Gabriele Minì did an amazing recovery to P7 in race 1 after stalling at the start. In race 2 and 3, the Italian maximized his points with a fifth and fourth place overall which still leave him a close 2nd in the overall and rookie classification.

Sebastian Montoya experienced a difficult qualifying too, also because of the disruptions in the sessions, but the Colombian progressed throughout the weekend scoring great points showing a fast and consistent pace. Brazilian Gabriel Bortoleto continued to perform at competitive levels with two top-10 finishes before having to retire in race 3.

“I think this weekend was generally good, the speed was really good. I think we just got really bad luck. In qualifying 1 I did my first lap and then when I was in the second, I was improving my sectors and a full course yellow came out. There we lost most of the potential we had so we finished P8. In qualy 2 I made a mistake at the beginning so I spun and the full course yellow came out again. I think we did a good recovery after that finishing P4, it was a clean good lap before another full course yellow came out. In race 1 I was probably too optimistic. The pace was good and after the safety car wanted to see if I could overtake the two drivers in front of me to fight for the top-3. I just misjudged the braking, touched another car and my suspension bent so I had to retire. In race 2 I started P4 and I had gearbox problems in the beginning so I dropped two positions. Then with the rain a lot of cars were banging wheels and touching, and again I lost positions when a car hit me. However the final lap we set a really good laptime showing the speed that we had that came in a little bit late. In Race 3 we started in P19 but we knew we were fast in the dry. I did what I had to do. I gained a few positions at the start, and approached one car at the time, gaining little by little. I finished P7 which is really good considering that I started in P19!”
Qualifying 1: P8
Qualifying 2: P4
Starting Grid Race 1: P8
Starting Grid Race 2: P4
Starting Grid Race 3: P19
Fastest lap: 1’45″661
Fastest lap: 1’45″257
Race 1: DNF
Race 2: P14
Race 3: P7

“I got my first pole position which felt really amazing in Q1. In Q2 it was also good. In the first race I suffered a first-lap contact, as we analyzed afterwards I couldn’t do anything to avoid it. With front wing damage it was really difficult on the straights but it’s still really good to finish in P4 and finish the race. The second race was also very interesting in wet conditions. I scored P4 in the end with some hard fighting which made me happy again. In the last race we were P4 again but we got all together in one group and a guy who was trying to pass touched me sending me off the track. Again, I couldn’t have done anything, he kind of lost the car into me. It was very unfortunate because it could have been easy points for the championship. Now we will be back into action immediately with a test in Hockenheim.”
Qualifying 1: P1
Qualifying 2: P6
Starting Grid Race 1: P1
Starting Grid Race 2: P6
Starting Grid Race 3: P4
Fastest lap: 1’45″168
Fastest lap: 1’45″664
Race 1: P4
Race 2: P4
Race 3: P12

“It has been a tough weekend. In qualifying we weren’t favoured by the red flags and full course yellow situations and we didn’t manage to stay at the front so I qualified in row 4 for all three races. The starting position counts a lot here. In race 1 I had a great pace but I stalled the car at the start. Restarting from the last place, I managed to fight back up to P7. In race 2, it was my first time on the wet in a race and it was difficult for the visibility because with the spray it’s hard to pick the right lines and braking points. I finished fifth after battling with Dino. In race 3, starting from P8, I fought back to third place but our pace was not as quick as the top-3 so I slipped back to P4. It hasn’t been a super weekend but we still managed to score valuable points in every race.”
Qualifying 1: P7
Qualifying 2: P7
Starting Grid Race 1: P7
Starting Grid Race 2: P7
Starting Grid Race 3: P8
Fastest lap: 1’45″572
Fastest lap: 1’45″698
Race 1: P7
Race 2: P5
Race 3: P4

“Generally it was a good weekend although a bit unlucky in the last race. It was a constant improvement. I started from P11 in the first race and improved to P8 while in race 2 I lost a couple of spots in the end going from fifth to seventh place. In race 3, we had a really good restart, overtaking two cars in the first lap but unfortunately we suffered a broken rear suspension jumping a chicane. I immediately felt that something was not right. I just came back to the pits and retired. I want to thank the team because they worked a lot over the weekend.”
Qualifying 1: P11
Qualifying 2: P5
Starting Grid Race 1: P11
Starting Grid Race 2: P5
Starting Grid Race 3: P10
Fastest lap: 1’45″922
Fastest lap: 1’45″488
Race 1: P8
Race 2: P7
Race 3: DNF