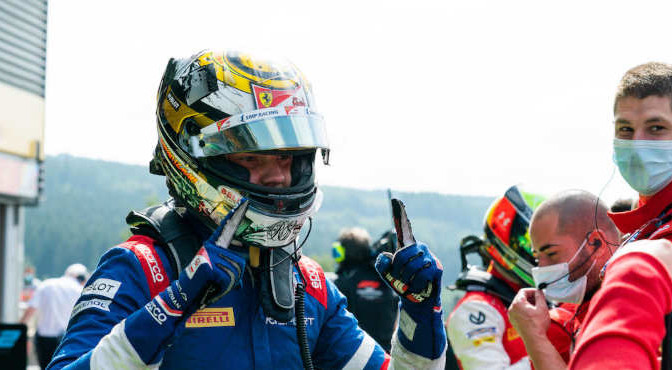 PREMA Racing wrapped up a scintillating day at Spa-Francorchamps, as Robert Shwartzman and Mick Schumacher finished 1-2 in race 2 of the FIA Formula 2 Championship weekend. The Russian had a brilliant start from fourth to third place and then went into the lead when the two contenders out front collided. From that point on, he was smooth sailing for him. The 20-year-old Russian took his third win of the season with a wide margin, scoring the fastest lap in the process and reclaiming the championship lead.

Mick Schumacher was brilliant too starting from sixth place. Rebounding from a difficult start, the German cruised to second place with a display of superb passing and held onto the position until checkers fell. It was his sixth podium of the season for him, the second in two days on Belgian soil.

For PREMA Racing, it was the first 1-2 finish of the year carrying in great momentum and hopefully, paving the way for the next two rounds of the year in Italy.

“Spa certainly does remain my favorite track. It’s great to have finished on the podium here yet again. Although my start wasn’t that good and I lost a position, I felt very comfortable in the car. I was able to attack throughout the race and could overtake five cars in total, finishing P2 after all. The team have made a brilliant job over the entire weekend in setting up such a greatly balanced car. Now I can’t wait to race again in Monza in only six days time.”

“I’m really happy that we finally went back to winning after Hungaroring. I got a good start and took P3 out of turn 1. I saw that the drivers in front were quite aggressive with each other, so I didn’t want to be involved. In addition, I decided to keep more life into my tyres. The two cars in front eventually collided and I used the opportunity to get past. After the safety-car, I tried to get the best re-start possible and then the goal was to keep the pace and open the largest possible gap. Eventually, the pace was really good and the gap quite big. We also took the points for the fastest lap which are also important. I want to thank the team because we worked a lot this weekend and it’s great to have a team that supports the driver to also try new things.”
Qualifying: P4
Race 1: P5
Race 2: P1
Fastest Lap: 1:57.861
Fastest Lap: 2:01.092
Fastest Lap: 2:01.124