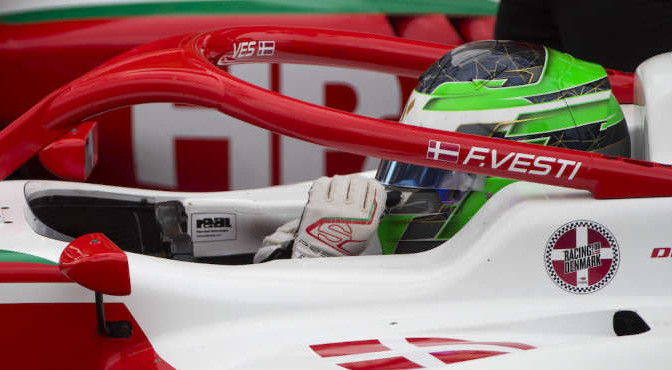 The American started from the second row of the grid and fought among the top-5 for most of the race. Unfortunately, he soon started to experience an engine issue which saw him lose pace and be eventually passed by several drivers – including both his teammates – before ending up in P8. Despite dropping back and losing valuable points, there is a silver lining for him. He will benefit from an extremely valuable third-place start on tomorrow’s reversed grid.

Starting from the 8th position, Australian Oscar Piastri moved in the opposite direction, impressing with a bold recovery which featured an aggressive pace and spectacular outside moves. Despite having to give back one position at some point, the 18-year-old Renault Sport Academy racer fought back to P5 and reclaimed the Championship lead from Sargeant.

Frederik Vesti also put up a neat performance, moving from P9 on the grid to the sixth place at the end, slicing his way through traffic and staying away from any potential issue.

“Fifth place in race 1 is quite good and the pace at the end was really strong. We were holding stations with everyone at the beginning, but then our tyre deg was better than anyone else’s so I could make up some positions at the end. It was unfortunate for Logan with his issue. Hopefully, he can get that fixed. I think we did a good job from 8th, scored some good points and we are in a pretty good spot for tomorrow as well.”

“In turn 1 I was clipped by a car behind me, and I lost two spots because of that, but I was lucky that I had no damage. After about five laps, I was back to where I had started in P9, and from that point on, I was managing my tyres and doing my best to go forward. We did a lot of good overtakes throughout the race and ended up P6. It’s a good step forward from the last time we raced, so I’m very happy. Now I’m looking forward to keeping up with the improvement tomorrow.”

“It has been a pretty disappointing race, to be honest. I had major engine problems from pretty early on. I think the pace could have been strong enough to fight for the podium. We lost a lot of points today, but starting third tomorrow, as long as we resolve the issue, I believe I have the pace to win.”
Qualifying: P4
Race 1: P8
Fastest lap: 2:06.079
Fastest lap: 2:07.775