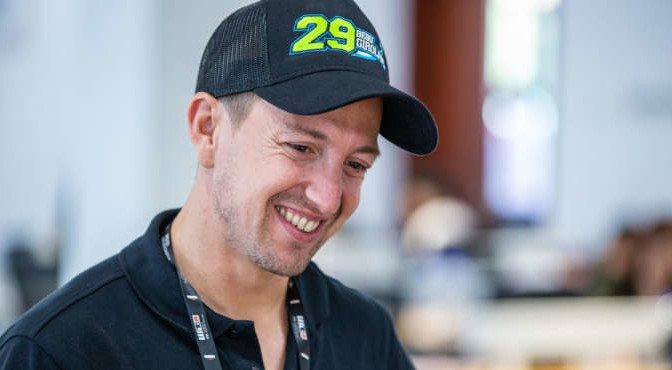 Triple WTCR race winner has his eye on the big prize with ALL-INKL.COM Münnich Motorsport *Continuity factor a big plus for Argentine who is done with learning and ready to win again *Girolami: “I have three very good drivers alongside me raising the bar”

Néstor Girolami will line up on the WTCR – FIA World Touring Car Cup grid as one of four Honda-powered drivers competing under the ALL-INKL.COM Münnich Motorsport umbrella. But as the Argentine ace concedes, having four hugely competitive drivers representing the Honda Racing family won’t be without its challenges.

How ready are you for the new season?
“We are very, very prepared, much better than last year because I already have one year in TCR cars and one year in WTCR. Now I know better my rivals, the tracks, I know much better the car, the team. I am in a position to fight for the championship this year. Last year was more learning for me but this year with three very good drivers alongside me is also raising the bar and my goal is to fight for the championship.”

You got the chance to race in TCR Europe at Paul Ricard. What was it like to be back in action?
“My last race was Sepang last December and it’s not normal when you are stopping for eight months. It felt really, really strange although it was also not in my plans to do this race. The decision was really, really late when Viktor Davidovski, the usual driver had the problem to enter France. I received a call from the customer of Honda, PSS Racing Team. Of course, I asked Honda first and of course Honda agreed I should do the race to help the customer. It was also a good opportunity to prepare my first WTCR race.”

So how can this experience help you when the WTCR starts next month?
“Even if we have been testing it is not the same. We were testing quite a lot to get ready for the first race of WTCR. Doing testing is one thing but doing races is another thing. To fight a little bit, to find my pace and get adrenalin during the weekend was really good but also fighting with very good teams and very good drivers will help me. The Honda Civic Type R TCR I drove was brand new so I had to get the feeling from the car and also Paul Ricard was new for me. But it was a really good challenge to adapt myself to the series, the track, to my team. Also, Viktor was very happy and I imagine this result helped them to show the potential of Honda in this championship.”

What does the opportunity to continue with ALL-INKL.COM Münnich Motorsport mean to you?
“For sure it’s very valuable. Being in my second year with the same people around is already an advantage. Having Esteban [Guerrieri] with me, I know him very well. Also, with Tiago [Monteiro] I have a very good relationship and also with Attila [Tassi]. The atmosphere in the team is really nice and this is very important. As a team we are very strong. For sure everybody wants to become world champion but we are professional and, at the end, we have to become team champions first and to get this title everybody has to work together. We are a Honda family team.”

With two extra cars under the ALL-INKL.COM umbrella, is this a help or a hindrance?
“The team is very well prepared to have four cars with more people, more engineers. Also having the opportunity to test more things with more drivers is an advantage. For sure there are negatives and positives of having four cars but I am seeing more positives than negatives. If you look at our competitors, they are having four cars so at one point having four cars on the grid will help us to get the championship because we can work together.”

But is having four competitive drivers effectively in the same team a risk in case the on-track battles get too heated?
“As always when you have four very good drivers the possibility to fight are a lot because everybody gets the same Honda. For sure we will be very, very close, but we have to be smart and get the title for Honda. For sure every driver wants to win and we will push hard and fair between us and the others of course. We are under contract with Honda and the important thing is to give our 100 per cent but not crash into each other. We have to maximise in every event the points, especially this year because there are only six events. Every race will count a lot. We have to avoid zero points, that’s the main goal this year. Even if we are four very competitive drivers, we have a very good relationship and that will help us to not have trouble between us. The atmosphere in the team is very good and I am personally very happy to have Tiago and Attila in the team this year.”

While many elements remain the same, there is a new official tyre supplier in Goodyear…
“It’s also an important change because when you change the compound you also have to change the driving style. You have to change the set-up. We have been able to try the new tyre and we have been happy with the result. But we have to see in the first race how we handled the situation. We know a little bit more now after the pre-season testing but, in every race, I think you will discover more secrets from the tyres. It seems to be really good and we performed well with the Goodyears.”

How will you change your driving style?
“Of course, it’s quite secret and nobody wants to tell nothing because it’s a secret that can help other drivers. I just want to say we are happy with the results and the new Goodyear is suiting well our Honda car.”

This year has been very difficult due to the COVID-19 pandemic. How has it impacted on you?
“Life is completely different and feels really, really strange. We are two weeks before starting the season but I don’t want to go to the gym even though they are now open. I don’t want to take the risk so I am doing some working at home, some simulator sessions. When I go to the bike but before I would go with a couple of others or with a group, but now I decide to go alone to avoid social events. I protect myself and the others by wearing the mask all the time. It’s very strange because you have to be very prepared for different scenarios. For example, I can go by car even if it’s 1500 kilometres to some events. But I prefer to go with time and not take a risk to go to the airport and avoid meeting many people. You need to take care.”

You and your wife Juliana became parents for the first time at the start of the year. How are you enjoying being a father?
“It’s so nice, it’s really, really nice to become a father and having the possibility to spend a lot of time at home is one of the very few positive things of this COVID-19 situation. Seeing how she is starting to do the first crawl, the first smile, it feels so, so good. I am very lucky because I have my wife who is taking care all the time when I am outside. I am calm when I am outside because I know Juliana is taking care of our daughter with a lot of care and a lot of love. When I am on the track, I am just focused on the track and when I am at home, I am enjoying the time with the baby. Juliana is taking care of her at night, I am doing the first part of the morning so I am in good condition to train. But we learn every day because it’s our first child but the time is flying!”

Finally, if you don’t win the WTCR title this year, who will?
“One of my team-mates for sure. I will not tell you who. But as long as one Honda driver wins the title I am really, really happy.”

A Q&A with another WTCR race winner will available from tomorrow, 28 August