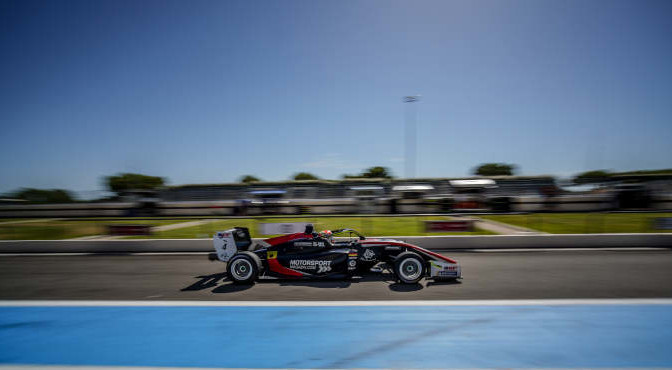 Two weeks after experiencing what was a rather sobering start to the season in the Euroformula Open Championship, Niklas Krütten began to make amends at Le Castellet’s Formula 1 circuit where Race 3 and 4 of the 2020 season took place at the weekend. The 17-year-old Team Motopark driver seized the initiative, making significant progress on Saturday with fifth place overall and victory in the Rookie classification. Another strong top-ten result in the second race served to confirm the positive trend.

Krütten used Friday’s two practice sessions on the 5.84-km Circuit Paul Ricard to maximise the potential they had identified in Budapest. He and the Team Motopark crew got down to work and tweaked the Dallara 320′s setup as well as adapting his driving style. Their success in getting things right for the weekend led to a place on the fourth row of the grid in Q1 on Saturday.

Krütten pushed forwards right from the start in the first race. The ADAC Sports Foundation protégé worked his way up into the Top Five with a determined showing on the first lap, taking the lead in the Rookie classification. He maintained P1 in the Rookie stakes and P5 overall over the entire 16-lap race. He was more than 30 seconds up on the next-best rookie as he crossed the finish line.

Q2 resulted in grid slot seven for Krütten. He pushed forwards once again in the race late on Sunday afternoon and joined the fight for top positions at an early stage while lying in sixth place. On taking the chequered flag, he was barely two seconds adrift of a P4 finish. His final result enabled him to move into P2 in the Rookie class.

Being on an upward trend at Le Castellet has propelled Krütten up into second place in the overall rankings of the Rookie classification, level on points with the leader. It will be some three weeks now before the next round of the Euroformula Open Championship gets underway at Austria’s Red Bull Ring where Round 3 of eight in the junior series is scheduled to take place, 12th/13th September.

You have made a big step with your win in the Rookie classification. How satisfied were you with your weekend?
It’s nice to be able to bring home another trophy after winning the Rookie classification. That little bit of success proves we’re on the right track. We shortened the gap on the leaders after having a tough time at the opener in Budapest. A Rookie podium is good, but there’s plenty more to come. We want to fight for the lead and a place in the Top Three. With that in mind, we intend to work even harder to secure the top spot.

In which areas do you think you made the greatest progress in France?
We improved a little in every area. I found it much easier to put my new-found knowledge into practice on the racetrack and get into my rhythm. I had more confidence in the car and in myself. Working with the crew was terrific. We exchanged plenty of ideas about how to maximize our potential and considered all the details in order to find a way.

What are your expectations for the next round at the Red Bull Ring?
The goal obviously is to fight at the top. I feel optimistic about continuing on the upward trend that was apparent at Le Castellet. The Red Bull Ring is one of my favourite tracks and I’m really looking forward to racing there. I’ve secured podiums twice previously at Spielberg in Formula 4. I just love the fast corners and my experience from the past couple of years should help get the weekend off to a good start. The team and I aim use the break to go on working hard so that we can be really well prepared for our trip to Austria and we will take the opportunity to achieve top results.