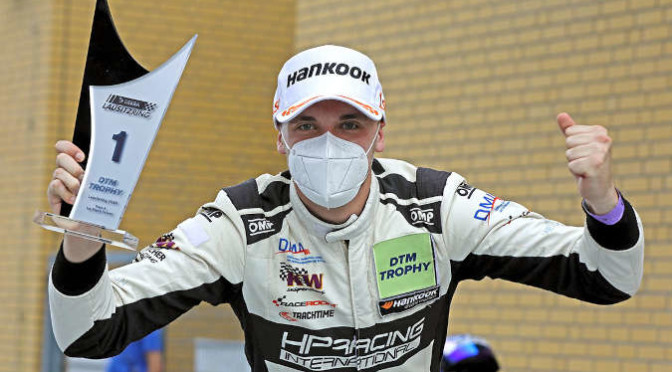 Second race, second victory: driving for the team HP Racing International, Mercedes driver Tim Heinemann scored his second win in the DTM Trophy race on the Lausitzring on Sunday. In a thrilling race in which tyre strategy was decisive, the German demoted British driver Ben Tuck in the Walkenhorst Motorsport BMW to second place. Repeating his third-place finish from the race on Saturday, Jan Kisiel (POL, Mercedes-AMG, Leipert Motorsport) claimed the final podium slot. The three first-placed drivers from the race are also dominating in the drivers’ standings. With his pair of victories at Lausitz, Heinemann considerably extended his lead in the DTM Trophy drivers’ standings. After four of this season’s twelve races, he is leading with 94 points from Tuck (62) and Kisiel (55).

For José María López (ARG, Toyota) and Peter Terting (GER), things didn’t go according to plan. The three-time touring car world champion had his fastest time from qualifying taken away because his team Ring Racing had committed an infringement of the parc fermé rules. As a result, López was dropped to the back of the grid. Former DTM driver Terting, who would have started from fifth, already saw all his hopes blown prior to the start as his Porsche (PROsport Racing) caught fire on the starting grid.

For López, his grid penalty was an additional motivation. With the Toyota Supra, competing for the first time, he made up one position after another and worked his way up from last on the grid to finish eighth. Out in front, Heinemann used clever tactics and caught the right moment as Tuck’s tyres degraded in the closing stages of the race. The two raced down the main straight side by side. Tuck defended as well as he could, but Heinemann used the inside line to move up into the lead in the first corner with three laps remaining and didn’t look back.

» Quotes – race 2, Lausitzring
“An unbelievable feeling and a fantastic weekend for us. Of course, I hoped for another good result following my win from yesterday, but I didn’t really expect to score two victories. Towards the end, my tyre management was better than Ben’s, that was the key to success.”
Tim Heinemann, Mercedes-AMG, HP Racing International
“Of course, I would have liked to win here today, but it wasn’t to be. The tyres degraded more and more with two laps remaining. At some point during the race, I hoped that Tim would get under more pressure from behind and get involved in position fights, but sadly, that didn’t happen. The balance is okay, but in corners, we are still lacking speed, we have to continue to work on that.”
Ben Tuck, BMW, Walkenhorst Motorsport
“For me, another successful day at Lausitzring: third place yesterday, today I repeated the result. I am really happy, even though I was unable to hold onto the lead. The fierce duels with Ben Green were great fun and eventually I had the upper hand.”
Jan Kisiel, Mercedes-AMG, Leipert Motorsport