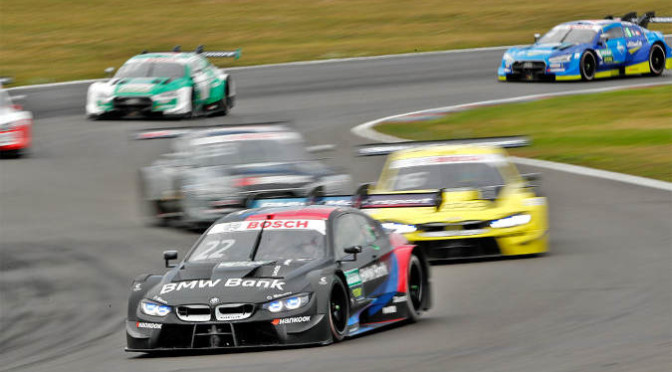 The first win for BMW after one year and 13 days: Lucas Auer (AUT) and Timo Glock (GER) even made it a 1-2 for BMW in the sixth DTM race of the season at Lausitzring. The best-placed Audi driver, Robin Frijns (NED) finished in third place. Thus, a winning streak of twelve consecutive victories for the Ingolstadt-based brand came to an end. The last driver to date to score a DTM race win for the brand from Munich was two-time champion Marco Wittmann (GER) at Brands Hatch in the UK on 10th August, 2019. Thrilling duels, tactics and strategy as well as position fights until the finish marked the fourth race in the Lausitz region to conclude the first-ever DTM double header throughout the race distance.

Robin Frijns, who had been on pole position for the fourth time in the season’s six races so far, got his race off to a promising start. The Dutchman had a perfect getaway and initially defended his lead. Behind him, René Rast (GER) overtook Nico Müller (SUI) for second place. Further down, South African Sheldon van der Linde caused a heart-stopping moment as his BMW initially stalled, but all other drivers managed to avoid the obstacle. After a few laps already, Rast overtook his fellow Audi driver Frijns, but the defending champion’s lead wasn’t to last long either. Frijns came to the fore again, but then lost his lead to Jamie Green (GBR, Audi), until BMW eventually took control. For a long time, ex-Formula 1 driver Timo Glock looked set for victory, but on the penultimate lap, he had to let his fellow BMW driver Lucas Auer past. Gerhard Berger’s nephew scored his fifth DTM career win and his third at Lausitzring. Glock was by no means disappointed by just having missed out on victory: he was pleased with BMW’s strong comeback instead. Behind Frijns and Green in third and fourth place, points’ leader Müller and defending champion Rast were fifth and sixth across the finish line, the two title rivals separated by merely 0.011 seconds.

Unlike the previous day, as the race got underway on a wet track, the race on Sunday was held on dry asphalt and in considerably cooler temperatures than on the days before. In the race, the pit stop strategy again played a decisive role as nobody knew exactly how long the Hankook control slick tyres would last in the new conditions. On lap ten, Glock was the first one from the group of the frontrunners to come in for his mandatory stop while Frijns, Rast and Müller stayed out on track until lap 18.

Prior to the DTM’s fourth season round at Assen in The Netherlands (4th–6th September) where, according to the current situation, spectators will be admitted again for the first time this season, Müller retains his commanding lead in the drivers’ standings. The Swiss has 133 points to his tally, Rast is following in second place (97) from Frijns (92). With 52 points, Timo Glock has moved up into fourth as the best-placed BMW driver.
» Quotes – race 2, Lausitzring Grand Prix
“The race weekend at Lausitzring was an overall success for the DTM. As a result of the sensational performance by BMW, the battle for the championship is now fully open again. Fans in front of the TV screens got to see motorsport at its best with thrilling wheel-to-wheel battles and plenty of excitement until the final lap. Therefore, I feel sorry even more for the fact that no spectators could be on-site for this perfect DTM weekend. The TV viewing figures on SAT.1 that have reached a new record level clearly show how big the excitement for the race series is. The Germans simply are real DTM fans. Personally, I am also very delighted that my nephew Lucas Auer has driven a fantastic race and finally was able to show his talent and his speed again.”
Gerhard Berger, Chairman ITR
“Unbelievable! I am still lost for words. Once again, Lausitzring has been very kind to me. I am a little bit proud of this victory indeed. The race probably was the most intense race I have ever driven in the DTM: one mistake and you don’t finish third, but you end up seventh. I was able to manage the tyres really well; the strategy, the pit stop and the car were absolutely top. On the final lap, I was able to benefit from that. Actually, it couldn’t have been any better.”
Lucas Auer, BMW, winner
“Today, we have won the race for BMW together. On Friday, we have already seen during our long runs that we were able to put Audi under pressure. And we knew from the race on Saturday that Audi was struggling with the tyres. I made my stop early and managed my tyres really well. Once I was in the lead, I knew that I had to pull a slight gap. While doing so, I ran over a piece of rubber with one of the front wheels and ruined my tyre with that. I considered whether I should fight for victory, but then I looked at the overall picture and did’t make life too hard for Lucas as he overtook me. That was the right decision.”
Timo Glock, BMW, 2nd place
“It was a crazy race. I started from pole position and initially, my pace was okay, with René Rast and Nico Müller behind me. We made our pit stop at a late stage and then I was well behind in the train in seventh place. Initially, that left me unable to use the benefit of the fresh tyres. At the end, I had more DRS available and I was able to work my way up to third. That was all I could do today. Now, I have a good feeling coming to my home round at Assen in a fortnight.”
Robin Frijns, Audi, 3rd place
» Results – race 2, Lausitzring Grand Prix
01. Lucas Auer (AUT), BMW M4 DTM, 34 laps in 57m 22,467s
02. Timo Glock (GER), BMW M4 DTM, + 1,210s
03. Robin Frijns (NED), Audi RS 5 DTM, + 1,775s
04. Jamie Green (GBR), Audi RS 5 DTM, + 1,977s
05. Nico Müller (SUI), Audi RS 5 DTM, + 2,464s
06. René Rast (GER), Audi RS 5 DTM, + 2,475s
07. Jonathan Aberdein (RSA), BMW M4 DTM, + 3,236s
08. Loïc Duval (FRA), Audi RS 5 DTM, + 4,096s
09. Marco Wittmann (GER), BMW M4 DTM, + 4,205s
10. Sheldon van der Linde (RSA), BMW M4 DTM, + 9,090s