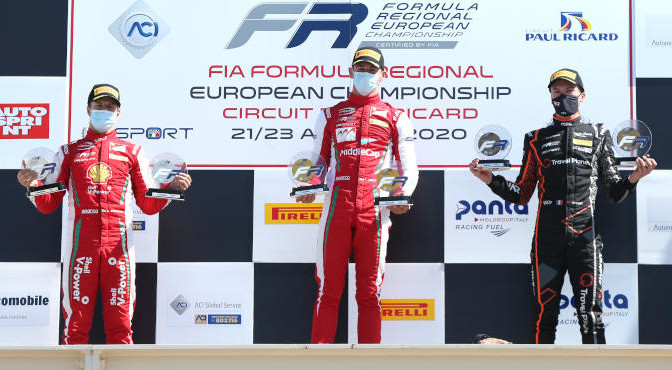 From one seaside resort to the other, PREMA Powerteam continued to be the dominant force of the 2020 FIA Formula Regional European Championship. Moving away from the three wins of Misano, the team lined-up in southern France at Circuit Paul Ricard for round 2, scoring three wins and three second-place finishes at the challenging venue near the Mediterranean shore. Arthur Leclerc prevailed in race 1 and 3, while Gianluca Petecof took the spoils in race 2.

The Monegasque racer sailed to victory from pole in the opening race. while the Brazilian gained one position compared to qualifying up to the second place. In race 2, Petecof took advantage from pole to edge Leclerc, while he couldn’t do the same in race 3 with a troubled getaway which saw him slip down to fourth.

Petecof then stormed back to P2, but despite being within striking distance for the lead, he couldn’t find the right chance, rounding out the third 1-2 finish of the weekend for PREMA Powerteam.

Coming from his first win in single-seaters at Misano, Dane Oliver Rasmussen qualified three times into the top-5, and highlighted a gradual improvement going from P6 in race 1 to P5 in race 2 and P4 in race 3. Jamie Chadwick faced a challenging weekend at the tough French circuit and survived contact to finish P10 in race 1 and 2, and P9 in race 3.

“Overall I think we can say that it was a positive weekend for us with the high point obviously being our race 2 win. Race 1 was positive too, coming from third to second, then a mistake at the start of the last race made us fall back to fourth and recover to second which of course is not what we wanted but we got to look at the positives even though there is a lot to improve and learn from. Head down to the next round, we are still leading the championship five points ahead so there’s plenty of hope to fight for the title.”
Qualifying 1: P3
Qualifying 2: P1
Starting Grid Race 1: P2
Starting Grid Race 2: P1
Starting Grid Race 3: P1
Fastest lap: 1’58″316
Fastest lap: 1’57″446
Race 1: P2
Race 2: P1
Race 3: P2