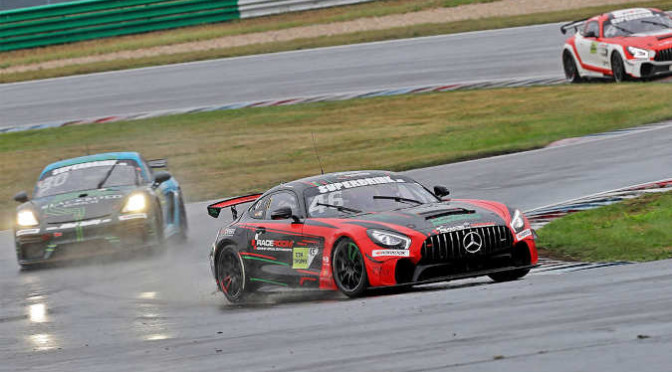 Tim Heinemann (GER) has won the first race of the DTM Trophy at Lausitzring with the Mercedes-AMG of the HP Racing International team. Having started from second place on the grid, the points’ leader proved that he had strong nerves in difficult conditions as well. He took the lead around the halfway point and held on to it until the finish. Pole-sitter Felix Hirsiger (SUI) initially was in front after the start with the Allied Racing Porsche, but then was unable to keep Heinemann, who had better grip, at bay and had to let the German past. Third-placed Jan Kisiel (POL) showed a spirited drive to claim the final podium slot in the closing seconds with his Leipert Motorsport Mercedes-AMG. Prior to making his move in the final corner, he was involved in hard duels with German Jan-Phillip Springob (Mercedes-AMG, Superdrink by Bremotion). The latter had to make do with fourth place as he had less grip in spite of taking the inside line.

The race in the rain had plenty of action in store. KTM driver Laura Kraihamer (AUT, Teichmann Racing) made an excursion into the scenery early in the race, but managed to rejoin the race without any meaningful damage. In the closing stages, three-time touring car world champion José María López (ARG) and his Toyota teammate Heiko Hammel (GER, both Ring Racing) collided, forcing López to retire.

The safety car intervention resulting from the accident lasted until the penultimate lap, staging a furious dash towards the chequered flag. Heinemann, who was well aware of the threat of Hirsiger, who was biding his chance behind him, cleverly slowed down and made a perfect restart. Further down the field, there was more contact as Swiss Lucas Mauron with the Racing One Audi collided with his compatriot Rudolf Rhyn in the Phoenix Racing Porsche.

» Quotes – race 1, Lausitzring
“Of course, I am really happy with the result. It couldn’t have been any better for us. The team really provided me with a great car here and it showed from the very beginning. Practice, qualifying and now also in the first race: I have felt very well in the car throughout.”
Tim Heinemann, Mercedes, HP Racing International
“Second place really is a super result for us, even though we were unable to hold onto the lead. Initially, things were looking good, but then I had to deal with decreasing grip at the wet track and I was no longer able to keep Tim at bay.”
Felix Hirsiger, Porsche, Allied Racing
“What a great finish! I was fighting until the final corner and eventually, it paid off. I am really happy. We have found a very good set-up and the tyres were working well, too. There was some contact and slight damage to the car, but thankfully, nothing serious. A great feeling to be on the podium again.”
Jan Kisiel, Mercedes-AMG, Leipert Motorsport