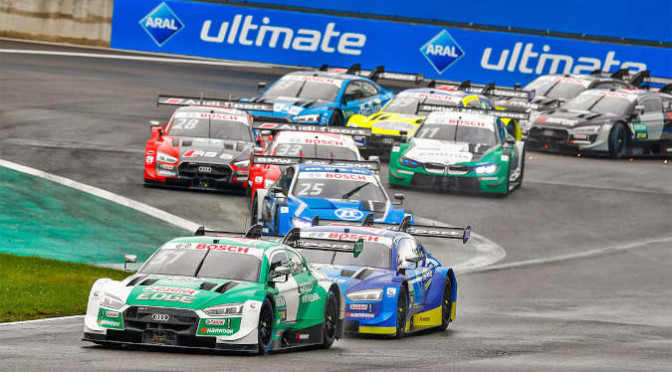 The defending champion is continuing his recovery: Audi driver René Rast (GER) has won the fifth race of the DTM season at the 4.570 kilometres long Lausitzring Grand Prix circuit. It was a highly entertaining race marked by multiple lead changes and hard position fights on the drying asphalt. Fellow Audi driver Nico Müller (SUI), who had come out on top in qualifying, a mere 38 thousandths of a second ahead of Rast and secured his first pole position of the season as a result, eventually had to make do with second place. Robin Frijns (NED), who had been leading the race for a long time after a good start, rounded out the podium on the opening day of racing of the second DTM weekend in the Lausitz region. Timo Glock, meanwhile, put in a good performance. After an error in qualifying, he worked his way up from 14th on the grid to finish fourth as the best-placed BMW driver in the race.

Prior to the sixth race of the season (Sunday live on SAT.1 from 13.00 hrs), Nico Müller remains in the lead of the drivers’ standings (121 points). With his second consecutive win, Rast has reduced the gap to 33 points.

Frijns with a good start, Müller’s pit stop strategy not quite optimal

For some drivers, the start with rain tyres wasn’t optimal: Rast lost positions while Audi driver Frijns found the proverbial ‘golden mean’ and immediately moved up into second behind Müller, who was initially able to maintain his lead. With the mandatory pit stops, during which all drivers had their rain tyres replaced by slicks, the situation changed as Müller’s Abt team had waited too long. Opponents Robin Frijns, Philipp Eng (AUT, BMW), and Marco Wittmann (GER, BMW) had already made their stops two laps earlier, Rast one lap earlier – that spiced up the battle at the front of the field. Müller, who initially held on to the lead after his stop, was at a disadvantage on cold tyres and soon after that was overtaken by Frijns and then also by Eng. Later on, Rast overtook the Swiss as well, the latter then only fifth. Robin Frijns tried to keep a charging René Rast at bay, but even his defensive line was to no avail: Rast was the fastest driver in the field and had no trouble getting past at the end of the main straight.

Müller’s tyres having reached their working temperature, his pace was good again, enabling the points’ leader to make up another three positions to finish second behind his perpetual rival Rast.
» Quotes – race 1, Lausitzring Grand Prix
“What a crazy race! I started on rain tyres, then changed to slicks, briefly ran through the gravel trap, made a good comeback and eventually won. Of course, I am happy with the result, no doubt about it. However, we can’t be 100 percent satisfied, we still have to keep working on our performance and improve the handling of the car. It is a bit of a roller coaster, the season is still fresh and the opposition remains strong.”
René Rast, Audi, winner
“My start was okay, but obviously not as strong as Robin Frijns’s start, who was on the boot lid of my car straight away. Then, our stop was at least one lap too late. I was surprised how quickly my rivals got their tyres to the right temperature. We are in a situation in which you can’t identify a tendency at all. I am expecting many more thrilling position fights and the BMWs have shown strong performances today as well.”
Nico Müller, Audi, 2nd place
“Of course, I am disappointed for not having been able to win the race. Our start was super, but in the closing stages, the tyres degraded too quickly. I was just lacking the necessary grip to stay up front. Now, I don’t have the right solution for the race on Sunday either, I just hope to survive the Lausitzring in a good way. Perhaps, chances to score my maiden DTM victory are better in my home race at Assen in a fortnight.”
Robin Frijns, Audi, 3rd place
» Results – race 1, Lausitzring Grand Prix
01. René Rast (GER), Audi RS 5 DTM, 32 laps in 57m 50,862s
02. Nico Müller (GER), Audi RS 5 DTM, + 1,969s
03. Robin Frijns (NED), Audi RS 5 DTM, + 4,922s
04. Timo Glock (GER), BMW M4 DTM, + 7,590s
05. Marco Wittmann (GER), BMW M4 DTM, + 13,282s
06. Mike Rockenfeller (GER), Audi RS 5 DTM, + 19,371s
07. Loïc Duval (FRA), Audi RS 5 DTM, + 20,273s
08. Philipp Eng (AUT), BMW M4 DTM, + 21,829s
09. Sheldon van der Linde (RSA), BMW M4 DTM, + 22,665s
10. Jamie Green (GBR), Audi RS 5 DTM, + 25,389s