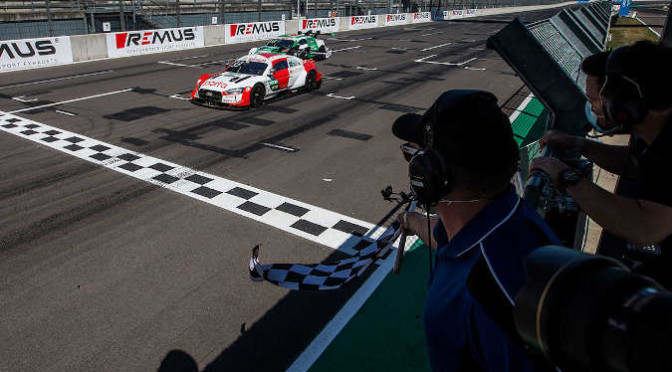 A heart-stopping finale in the DTM: in less than the blink of an eye and with the tiny margin of only 0.089 seconds, Audi driver René Rast put himself back in contention in the battle for the DTM title. In a photo finish at the Lausitzring, the two-time champion successfully withstood the final attack from last year’s runner-up Nico Müller (Audi) until the finish line. Rast and Müller repeated the closest race finish in DTM history: back in 1996, DTM legend Klaus Ludwig beat his fellow Opel driver Uwe Alzen at the Norisring, also by 0.089 seconds. Third place, the final podium spot, was equally hard-fought. Double champion Marco Wittmann (BMW) demoted Audi driver Robin Frijns (NED) to fourth place in an energetic finale. With this result, the German confirmed the upward trend for the brand from Munich and secured BMW’s 300th podium finish in the DTM’s long history. The second-best BMW driver was ex-Formula 1 driver Timo Glock, who was sixth across the finish line behind Mike Rockenfeller (Audi). After sixth place in the race on Saturday, Ferdinand Habsburg (AUT) again scored points by finishing tenth with his privately-run Audi.

Rast back into second place of the standings, but Müller well ahead at 100 points

One week from now, the DTM will be back in action at the Lausitzring again in the second part of its first-ever double header, but then at the 4.5 kilometres long Grand Prix track. Nico Müller having scored his third win on Saturday ahead of Sheldon van der Linde (BMW) and Robin Frijns (Audi), the Swiss holds a commanding lead in the drivers’ standings at 100 points after four races. René Rast, meanwhile, has made his way back up into second place with 61 points. Robin Frijns is third with 58 points. Marco Wittmann (28) is the best-placed BMW driver in sixth.

From lights to flag, the DTM staged a thrilling and entertaining race with spectacular manoeuvres throughout the field. Robin Frijns, who started from pole position for the third time in four races, had to defend his position from René Rast in such a way that the German briefly had to drive through the grass. While Nico Müller initially lost ground from second on the grid, Marco Wittmann was one of the drivers to make progress in the turbulent opening part of the race as he moved up from seventh to third. Frijns’s lead came to an end on lap three as Rast went past with a spirited move. After that, the German and the Dutchman swapped positions several times. The field of the up to 640hp strong touring cars was very closely together and the wheel-to-wheel battles for every position in the midfield were by no means less intense, quite some slight bodywork contact included.

Full-size in the rear-view mirror: Müller with a strong recovery

While Rast, Frijns and Wittmann made their mandatory pit stops to have a fresh set of tyres mounted very early, Müller waited considerably longer to have better tyres for the final sprint. Only seventh after his stop, the Swiss, who is to become a father for the first time within the next days, started his recovery that saw him move up all the way to second place. The green-and-white Audi became bigger and bigger in the rear-view mirror of his fellow Audi driver Rast. And the German had miscalculated, expecting the chequered flag one lap of the 3.5 kilometres long sprint circuit earlier. With all his experience, Rast successfully defended his position from Müller until the final metres, the Swiss seemingly glued to the rear of Rast’s car, but eventually unable to mount a successful challenge.

» Quotes – race 2, Lausitzring Sprint
“A good weekend. Today’s race was really thrilling. I am particularly happy with the fact that BMW has managed to finish on the podium again and was within striking distance. Nevertheless, Audi was still very strong. The battle Rast against Müller was super. With a gap of 0.089 seconds at the line, it was a photo finish. It would have been nice to have BMW as the third car for that photo finish as well, but it was thrilling, exactly the way the fans want to see it. That is what the DTM is about. We are already looking forward to next weekend when we are racing at Lausitz again.”
Gerhard Berger, Chairman ITR e. V.
“The race was very entertaining in the cockpit and surely for the viewers as well. From third place on the grid, I made a good start, but Robin Frijns slightly blocked me and I briefly had to drive through the grass in avoidance. We made our pit stop early, but once I was past Robin again, I was able to manage my tyres really well. Of course, I saw Nico Müller coming closer and closer and I was surprised indeed that the race lasted one lap longer than I had expected. It really was very close, but it was enough. After we had changed the set-up of the car completely, I felt considerably more at ease in the car than in the race on Saturday.”
René Rast, Audi, winner
“At the start, I had little grip and lost some ground. Then, I saw the rallycross action in front of me and I was suddenly in front again, but I had understeer on the outside line and I dropped back to fourth. It was quite a lot of work today because I was well down the order after the tyre stop. I stayed out of all the action and managed my tyres well. On Saturday, the race seemed really long to me, but today, unfortunately, it was one lap too short. Now, I am looking forward to my family and the arrival of a new family member.”
Nico Müller, Audi, 2nd place
“Being on the podium again is good. The initial situation from seventh on the grid was difficult, but I had a good start that brought me up into third place. On the penultimate lap, I pulled off a spectacular overtaking manoeuvre. Still, the gap to Audi is too big because it is my goal to get back all the way to the front again.”
Marco Wittmann, 3rd place