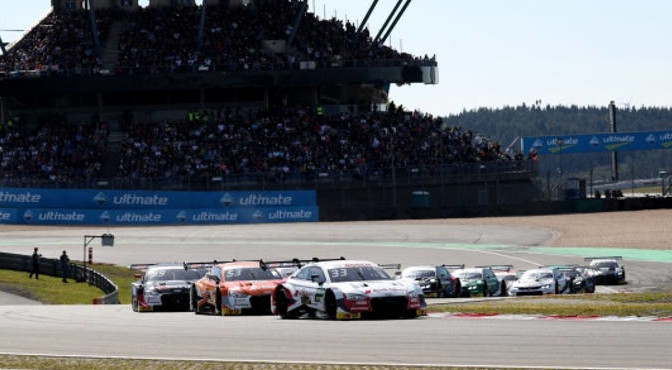 Nico Müller is the double DTM race winner of Spa-Francorchamps. The Audi driver from Switzerland was declared as the winner of the race on Sunday during the season opener a fortnight ago. The reason is a retro-effective time penalty for René Rast (GER, Audi), who was first across the finish line at the circuit in the Ardennes.

As the Deutscher Motor Sport Bund (DMSB), the authority responsible for ensuring that the regulations are adhered to, announced after the hearing on Friday, 14th August, Rast had activated the push-to-pass system twice during the race at Spa on Sunday while in the lead. According to the regulations, this is not allowed. In the post-race verification of the vehicle data, which is always done in the week after the race, the infringement became apparent. Subsequently, Rast was given a ten seconds’ time penalty as a replacement for a pit stop penalty. As a result, the defending champion drops to third in the classification behind his fellow Audi drivers Nico Müller and Robin Frijns (NED), after René Rast’s team (Audi Sport Team Rosberg) decided not to appeal.

This weekend, the second round of the DTM is taking place at the Lausitzring sprint circuit. Both Nico Müller and René Rast rank among the major favourites for the two race wins in the prestigious duel Audi versus BMW. On Saturday as well as on Sunday, the race gets underway at 13.30 hrs. and can be followed live and on demand on the streaming portal grid.dtm.com.