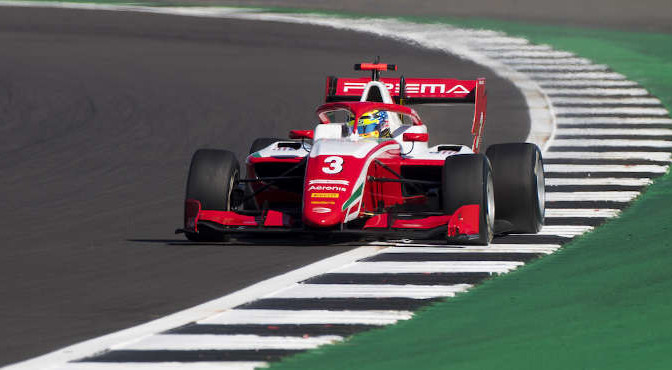 Logan Sargeant posted his second consecutive pole position today at Silverstone, as PREMA Racing and the FIA Formula 3 Championship teams went into action for round 5 of the 2020 season. The 19-year-old American delivered a stellar final lap to pace the field by 0.234 seconds at the end of qualifying.

The second round in as many weeks at the British venue highlighted Sargeant’s speed skills, but the performance was there for all PREMA Racing drivers. Dane Frederik Vesti ended up in fourth place, improving the momentum of last weekend, and is expected to play a major role in tomorrow’s Race 1.

On the other hand, only a reliability issue prevented Australian Oscar Piastri from fighting for pole after he was laying in second place with the first set of tires. While making his way to the pits to get his second set, he stopped due to an electrical issue. His first flying lap was enough for him to qualify P11.

“Not the greatest day. Practice was a disaster, while qualifying was slightly better, at least I got a lap in. I felt very good after the first laps and I was still getting all my references, so I thought I could have done a good job with the second set. Unfortunately, the car broke down coming to the pitlane.”
Qualifying: P11
Fastest lap: 1:45.877

“P4 is good. We have been consistent in qualifying and I’m happy about that, but I want to fight for pole positions so we need to keep working. Consistency is key and I think that the car is good. It should be even better tomorrow in the race and I’m looking very much forward to it. I want to thank Prema for working so hard. We definitely made a step from last weekend. We need to make one more and I’m very confident we will.”

“I’m extremely happy with the lap and with what we did. I’m super happy with the balance too. Prema did an amazing job as always. I just feel at home here at Silverstone with this car/track combination and I put together a really good lap. This time I need to finish the job on Saturday and that’s what we’re working hard on tonight, to make sure that I’m ready for tomorrow.”