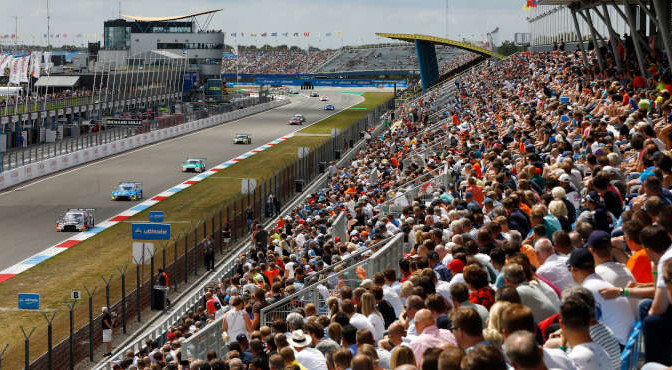 The DTM is opening its grandstands: according to the current planning status, 10,000 spectators each on Saturday and Sunday will be admitted to the circuit for the fourth round of the world’s fastest touring cars on 4th to 6th September at Assen to finally be able to watch the traditional duel between Audi and BMW at the 4.542km long track in The Netherlands from up close. With immediate effect, one-day tickets for Saturday or Sunday are available at 49 Euros from the DTM Ticket Shop (www.tickets.dtm.com) or the DTM Ticket Hotline (+49 1806 386 386).

The spectators in Assen not only experience the fourth round of the DTM season. The Belcar Endurance Championship, the Touring Car Classics, the Supercar Challenge and the Mazda MX5 Cup ensure a full and varied program with intense racing action. It is the second appearance in Assen for the DTM. At the successful premiere last season, the DTM delivered two spectacular races with the winners Marco Wittmann (BMW) on Saturday and Mike Rockenfeller (Audi) on Sunday.

To comply with the required hygiene and safety measures and above all to keep the minimum distance of 1.5 metres, the number of available seats is limited. The grandstands will be strictly separated and allocated according to the spectators’ means of transport, by car or public transport.

As paddock access remains not admitted and spectators also will have to do without the popular show acts for the time being, the ticket price has been reduced from the regular rate of up to 79 Euros to 49 Euros for adults (youngsters from 7-14 years: 24.50 Euros, children up to 6 years for free). The grandstand tickets as well as parking tickets for the DTM event are only available in pre-sale until Friday, 4th September, 18.00 hrs. From this time on, previously purchased tickets for Assen that haven’t yet been converted to vouchers, are no longer valid. Vouchers that have already been issued can be redeemed at any time and regardless of the event in the DTM Ticket Shop and via the DTM Ticket Hotline.

» Quotes
“This is great news for us and for all the fans of the DTM. We can hardly await finally welcoming spectators at the track. The DTM got its season off to a stront start at Spa-Francorchamps and a pleasing number of viewers has been watching the race action on TV and the online platforms. However, excited fans on the grandstands are a part of a race, not only at Assen, but hopefully also during further rounds of the 2020 DTM.”
Gerhard Berger, chairman ITR e.V.
“As the organizer of the DTM race in Assen, we have drawn up a Covid-19 plan in cooperation with our partners. A big advantage is that the TT Circuit Assen offers a lot of space. We have the longest grandstand in Europe, on which we have the opportunity to welcome 10,000 fans per day while maintaining a minimum distance of 1.5 meters, with parking lots at each grandstand, direct access to each sector and the assigned seats.”
Lee van Dam, CEO LPD International b.v., organizer DTM Assen