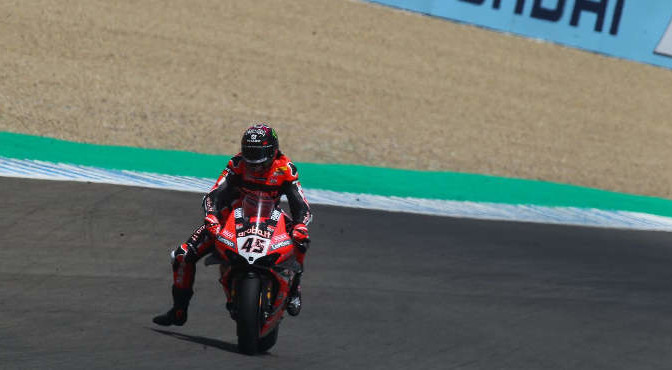 The opening laps featured battles across the top six, with Redding making an early move to pass polesitter Jonathan Rea (Kawasaki Racing Team WorldSBK) on the second lap at the right-hander of Turn 1, while Turkish rider Toprak Razgatlioglu (PATA YAMAHA WorldSBK Official Team) fought his way up from 10th to run in the top five in the early stages of the race.

Redding checked out at the front of the field to extend his lead to two seconds to Rea before the Northern Irishman got passed by Redding’s Ducati teammate Davies. The Welshman and Razgatlioglu both were able to get by Rea temporarily before an ambitious move by Alex Lowes (Kawasaki Racing Team WorldSBK) meant Lowes outbraked himself at Turn 6; allowing Rea to move back into third place.

Razgatlioglu eventually got by Rea again and held on to third place while Davies was running in second place, behind teammate Redding with the pair able to hold on to take a Ducati one-two. Davies did start closing the gap as the race entered the second half but Redding responded to extend the gap back out to over two seconds, holding on to take his second WorldSBK victory.

Razgatlioglu held on to claim a podium at the Circuito de Jerez – Angel Nieto, rebounding from a technical issue in the Tissot Superpole Race, for third place in Race 2; pulling away from Rea and Lowes as they fought with Michael Ruben Rinaldi (Team GOELEVEN). Rinaldi passed Lowes at Turn 5 before setting his sights on five-time Champion Rea, making a move up the inside of the Turn 13 hairpin on Lap 13 on the brakes; moving into fourth place and securing his joint-best WorldSBK finish – which was claimed at Jerez in 2019.

Lowes and Rea came home in fifth and sixth place respectively ahead of Michael van der Mark (PATA YAMAHA WorldSBK Official Team) in seventh place, the Dutch rider just over a second behind the reigning World Champion. He had a gap of over four seconds to Alvaro Bautista (Team HRC), the highest placed Honda rider on the grid in eighth place. Marco Melandri’s (Barni Racing Team) impressive race pace continued to show as he made up 10 places from 19th on the grid to finish ninth.

Loris Baz (Ten Kate Racing Yamaha) had been running in the lead group during the early stages of the race, but he came off his bike at Turn 13 on Lap 6 to take himself out of contention; the Frenchman eventually being classified in 17th place behind Federico Caricasulo (GRT Yamaha WorldSBK Junior Team).

Redding’s victory makes him the first British rookie in WorldSBK to achieve six consecutive podiums, while Ducati’s 1-2 was the first since Assen’s Race 1 of 2012, when Sylvain Guintoli took a career-first win, Davide Giugliano took a career-first podium and reigning Champion Carlos Checa was a mighty third. In contrast, Jonathan Rea’s sixth place is the lowest he’s finished a race since Laguna Seca’s Race 1 from 2014, when he was sixth on that day.

“That was good. I was a bit more experienced after the races in Phillip Island and Race 1 at Jerez. I’m still a fresh rider here so I need to understand the tyres and the riders. I felt very confident that I could manage the gap a little bit. I managed it pretty well. I saw Chaz coming a little bit when I tried to save the tyres, so I tried to maintain the gap. To be honest, it’s amazing to have two wins, pole position and a second position here. It’s the target of me and the team. Ducati have done a great job to give me a bike that’s able to win races and I hope we can continue those performances because we’re working very hard.”

P2 Chaz Davies (ARUBA.IT Racing – Ducati):
“I’m super happy with second place. A lot of it was done at the start, having the fifth-place grid spot and also not fluffing the start made life a lot easier today. I got away quite well and clean and I was just in the hunt from the beginning. Scott set a really good pace early on, it was a little bit too much for everybody. Then it sort-of levelled out a little bit and I could see Scott running deep, as was I, and it was really hard to pull a tenth here and a tenth there. I think he’d get a bit in one part of the track and I’d get a little bit in another. Overall, I’m really happy. The objective was a couple of podiums this weekend. I only managed one but I’m still very happy with it. It’s good confidence for next week.”

P3 Toprak Razgatlioglu (PATA YAMAHA WorldSBK Official Team):
“Yes, we are happy because we tried a different set up but it was not good. But we are happy because again, we got a podium and good points. Thanks to my team because they did a very good job this weekend. We are happy and see you in Portimao.”