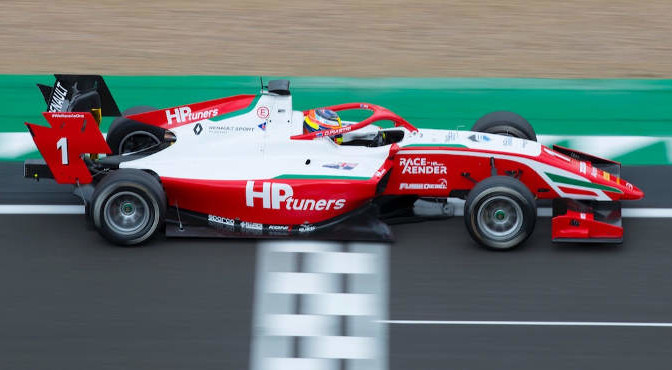 PREMA Racing posted a double podium finish in Race 1 of the FIA Formula 3 Championship at Silverstone. In a run heavily affected by the safety-car situations, which effectively neutralized the final part of the race, Australian Oscar Piastri posted a highly-valuable second place having taken the position from teammate Logan Sargeant earlier in the running. Piastri had the chance to attack for the lead, but the disruptions due to subsequent crashes prevented him from accomplishing the job. He still gained extremely valuable points in terms of his championship lead.

The American eventually ended up third after starting from pole position, as the running under safety car thwarted his attempts to fight back on DRS. The same story goes for Frederik Vesti who had to settle for P5, still scoring valuable points and remaining close to the leading train of the series.

“We finished second which is a good result. I had a good fight for the lead and I think we could have had a go at trying to get the win but couldn’t quite pull it off. The car felt mega so thanks to Prema for that. It was just unfortunate with those safety cars. The pace was really strong, and we can make some good positions tomorrow.”
Qualifying: P3
Race 1: P2
Fastest lap: 1:46.383
Fastest lap: 1:47.409

“The race went pretty ok in the beginning, I had a good start from P5 and a good first lap nearly passing Oscar for P3. Then the front tires started to fall off and we were struggling quite a bit after six laps. After that, I couldn’t do much, I was slow in high-speed corners because I couldn’t attack the entries. I got passed with the DRS and we stayed decent, but not enough to go forward. We have some things to improve for tomorrow, both with my driving and the car, but I’m very confident we can do it.”
Qualifying: P4
Race 1: P5
Fastest lap: 1:46.785
Fastest lap: 1:47.686

“Not the race I was hoping for today. We need to have a look at the data and see what went wrong. At the beginning of the race, I just didn’t feel the grip but it was coming back to me before the safety cars. We are a bit disappointed they came out because we would have had a good performance at the end. Anyways, starting from the eighth position tomorrow, we need to be better at the beginning and try to make up some positions.”
Qualifying: P1
Race 1: P3
Fastest lap: 1:46.257
Fastest lap: 1:47.751