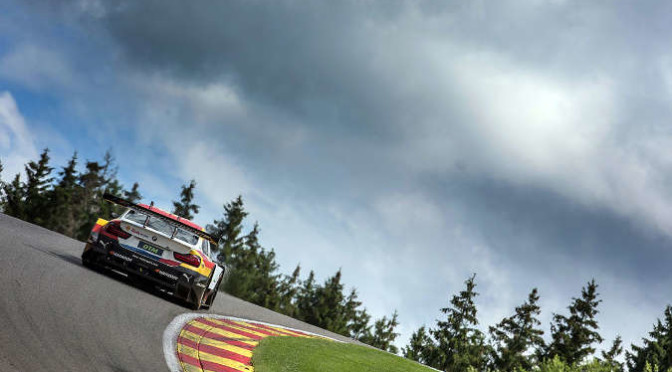 This Saturday and Sunday (1st/2nd August), it is happening at last: the DTM is getting its 34th season underway. At 13.30 hrs on both days, the starting lights will go out and 16 DTM drivers from eight countries will be flooring the throttle in their 640 hp strong touring cars from Audi and BMW. The challenge for the delayed season opener couldn’t have been any bigger as the seven kilometres long Spa-Francorchamps circuit is considered as one of the most demanding tracks in motorsport.

For the fans at home: watching the action live with SAT.1 and the new DTM Grid OTT platform
The Belgian Ardennes serve as the first of nine venues on the compact calendar of the 2020 DTM that until the traditional season finale at Hockenheim (6th-8th November) includes no less than three double-headers on back-to-back weekends at the Lausitzring, the Nürburgring and Zolder in Belgium. Due to the Covid-19 pandemic, fans initially have to do without the spectacular live experience at the track. However, SAT.1 and the new online platform grid.dtm.com are broadcasting live on both race days from 13.00 hrs onwards. Numerous different camera perspectives and live reports from the paddock and the pit lane ensure an entertaining up-close experience.

The duel: Audi against BMW, Rast against Wittmann
As the DTM season gets underway, the duel of the two premium manufacturers Audi and BMW is entering its next round. The brand from Munich still has unfinished business: in 2019, the first season according to Class 1 regulations and with highly-efficient two-litre turbocharged engines, the opposition from Ingolstadt clearly dominated proceedings. Audi celebrated a triple success with drivers’, teams’ and manufacturers’ title wins. Now, BMW is getting ready to overtake with its top driver Marco Wittmann in a BMW M4 DTM. The 30-year-old from Fürth has already secured a pair of DTM titles and now aims at his third DTM crown. Ex-Formula 1 driver Timo Glock (GER), Philipp Eng (AUT), Sheldon van der Linde (RSA) and the two new signings Jonathan Aberdein (RSA) and Lucas Auer (AUT) round out BMW’s high-class works line-up.

In pre-season testing, it already looked as if the engineers from Munich led by head of motorsport Jens Marquardt have succeeded in making the BMW M4 DTM properly fast. In the race, the car now has to prove its potential. But Audi has by no means rested on its laurels from the previous season either and has improved further components of its RS 5 DTM. Head of motorsport Dieter Gass is expecting a fierce duel with the opposition from Munich and in the process, he is particularly counting on René Rast, the benchmark of the past three DTM years: a pair of title wins and a runner-up spot, something no other driver in the DTM’s long history has achieved so far. If the 30-year-old from Minden indeed manages to rack up his third title, he would be on a par for title wins with touring car legend Klaus Ludwig. Only one driver was even more successful with five title wins thus far: Bernd Schneider. But for Rast, the opposition from within is a challenge, too, with ex-champion Mike Rockenfeller (GER), Nico Müller (SUI), Jamie Green (GBR), Robin Frijns (NED) and ex-Le Mans winner and World Endurance Champion Loïc Duval (FRA).

With Formula 1 connections into the DTM: Robert Kubica and Harrison Newey
Robert Kubica’s transfer from Formula 1 into the DTM is a guarantee for even more excitement. For the Pole, who competed in 97 Grands Prix and scored one victory, the DTM is the third major challenge after Formula 1 and the World Rally Championship. The 35-year-old is racing the only BMW customer car for the Orlen Team ART. For Audi, three customer cars from Belgian WRT Team Audi Sport will be on the grid with Ferdinand Habsburg (AUT), Fabio Scherer (CHE) and Harrison Newey (GBR), the son of F1 star designer Adrian Newey, as the drivers.

Taking Eau Rouge at 260 km/h: Mika Häkkinen set a new record time in 2005
Blanchimont, La Source, Eau Rouge: the corner names at Spa have long become a part of motorsport history. Eau Rouge and the subsequent Raidillon in particular are good for spectacular action when the DTM cars take the dup with the left-hand kink and accelerate the long uphill right-hander with an 18 percent incline to reach a speed of no less than 260 km/h. Here, man and machine are exposed to a lateral acceleration of 3.0g. However, there isn’t much time for the drivers to adapt to the legendary circuit with its 19 corners, as there are no on-track sessions on Friday: free practice, qualifying and the 100km race will all challenge the teams and drivers on Saturday and Sunday without much time in between.

Spa-Francorchamps, meanwhile, is no classic DTM track. Only once, in 2005, the race series previously had a round in the Ardennes. Back then, Formula 1 world champion Mika Häkkinen emerged as the winner and is still holding the lap record with the time of 2m13.124s he drove at the time. Now, everybody is waiting to see whether this record remains unbeaten this weekend. One driver from the current DTM field was already present 15 years ago: Audi Sport Team Rosberh’s Jamie Green.

On the support package of the DTM, the DTM Trophy will be making its debut at Spa-Francorchamps. It is the second race series staged by the DTM organisation ITR and its purpose is to give young and ambitious drivers the chance to present themselves at the high-quality DTM platform. 18 production-based GT sports cars from Audi, BMW, KTM, Mercedes-AMG, Porsche and Toyota will provide additional action on both days from 15.15 hrs onwards, immediately after the DTM races.

» Quotes – preview, Spa-Francorchamps
“Finally, the DTM can get its season underway in spite of the Covid-19 pandemic, something for which all the teams have been working really hard in the past weeks. We would like to thank everyone for this extraordinary commitment. The current race series promises thrilling highlights as I am expecting an entertaining duel between Audi and BMW, both on a par. The nine scheduled rounds with 18 races in a little over three months are a huge effort for all of us, particularly for the teams. However, it is disappointing for us that the fans are not yet able to experience the races live at the track. Therefore, we are doing our utmost to be able to reopen the grandstands as soon as the Covid-19 situation allows us to do so in a safe way. With the new online platform DTM Grid, we now want to bring the action and excitement of the DTM directly into the fans’ living rooms and provide a thrilling up-close feeling at home.”
Gerhard Berger, Chairman ITR e. V.
“Of course, I still remember the race at Spa in the 2005 season. However, things have changed dramatically since then. The DTM touring cars have changed considerably, we have significantly more power today, more grip, the cars are wider and safer. Back then, the DTM cars already were the world’s fastest touring cars and so they are today. Spa is different from most of the DTM circuits. At seven kilometres, the track is exceptionally long and incorporates many fast corners, Eau Rouge being a really special one among them. Getting a perfect lap in at Spa is a real challenge for every driver.”
Jamie Green, Audi Sport Team Rosberg
“The DTM season opener at Spa-Francorchamps is a special highlight. With the current DTM cars and the two-litre turbocharged engines, it will be an exciting challenge. None of the current drivers was allowed to test there before, so my exchange with Augusto Farfus, who drove the brief test for BMW, was all the more intense for it. As a result of the abbreviated two-day format, similar to Brands Hatch last year, the weekend will be anything but easy, because we only have 45 minutes of free practice available prior to qualifying.”
Philipp Eng, BMW Team RBM
“Being back at the race track and actually compete in races is an almost unusual feeling after such a long break. Therefore, I can hardly await the opener at Spa. For me, being a part of the DTM really means a lot. It is such a well-known and legendary race series in which the world’s best drivers are up against each other. The field has an unbelievably high quality. For me, that is a huge challenge that I am facing with joy.”
Harrison Newey, WRT Team Audi Sport