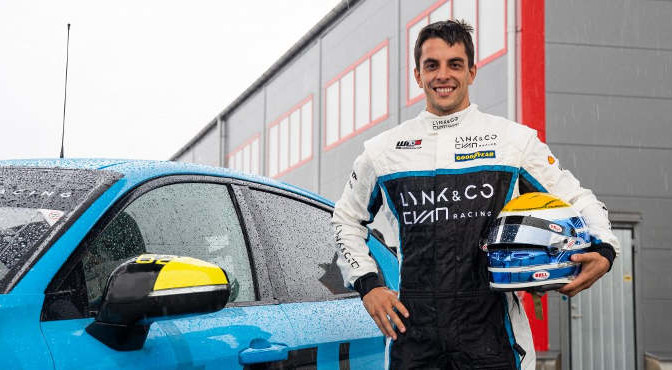 Santiago Urrutia has been handed the chance of a lifetime after topping a four-way shootout to drive for Cyan Performance Lynk & Co in the 2020 WTCR − FIA World Touring Car Cup.

The 23-year-old from Uruguay will join a growing band of young chargers by stepping up from TCR Europe to race in WTCR, which is set to fire up at the Salzburgring in Austria from 12-13 September.

He completes the Cyan Performance Lynk & Co line-up alongside Thed Björk and replaces Andy Priaulx, the World Touring Car legend who has stood down from full-time racing to focus on his son Sebastian’s sportscar career in the USA. Yann Ehrlacher and Yvan Muller have joined forces to front the Cyan Racing Lynk & Co WTCR attack.

“I’m super-happy to join Cyan Racing, it’s very emotional for me and for my whole country,” said Urrutia, who will team up with Thed Björk in place of Andy Priaulx, the World Touring Car legend who has stood down to focus on his son Sebastian’s sportscar career in the USA.

“I’m obviously young and I want to race in the WTCR with Cyan Racing for many, many years. I am really grateful to have got this opportunity and trust from the team and I will give all to live up to the expectations.”

Best in test: Wahlén explains why Urrutia was the chosen one
Urrutia was one of four drivers invited to test for Cyan Racing at the Anderstorp circuit in Sweden earlier in the summer. Fredrik Wahlén, Managing Director of Cyan Racing, explained why he was chosen for the second Cyan Performance Lynk & Co seat.

“We decided to go with Santiago as he showed strong potential during the test,” Wahlén said. “He got along really well with the team and he was fast in the car straight away.”

Christian Dahl, CEO and founder of Cyan Racing, added: “We are very happy to have Santiago with us and we are delighted to welcome him as a key player in our 2020 WTCR title bid.”

Single-minded Santiago makes touring car step
After success in karting and single-seaters, including in Europe and the USA-based Indy Lights series, Urritea made the move to touring car racing and placed third in last year’s TCR Europe standings, earning the Rookie of the Year award. He follows fellow young talents Mikel Azcona, Luca Engstler, Gilles Magnus and Attila Tassi by graduating from TCR Europe to WTCR.

“It’s not going to be easy, but that is why I love racing,” said Urrutia. “I have done a lot of preparations in the simulator and we are going to test on some of the circuits from the calendar, so I feel confident for the season.”

WTCR winner Björk can’t wait to Lynk up with “super-fast Santi”
Thed Björk, who challenged for last season’s WTCR title in a Cyan Racing Lynk & Co 03 TCR took part in the selection process. He rates his new team-mate highly. “I am very happy to get ‘Santi’ as my team-mate,” said Björk. “He is super-dedicated, and his background is a little bit like mine. He is super-fast, and I really look forward to work with him and to get to know him better.”

Who is Santiago Urrutia?
Born on 30 August 1996 in Miguelete, southwestern Uruguay. After excelling in karting, Urrutia moved to Italy and raced in Formula Abarth for two seasons before switching to European Formula 3 Open, where he was a two-time winner. Following a season in GP3, Urrutia relocated to the USA and won the Pro Mazda Championship before he embarked on a three-year stint in Indy Lights when he twice finished runner-up. He joined WRT to race an Audi RS 3 LMS in TCR Europe for the 2019 season, placing third in the final table as the Rookie of the Year.