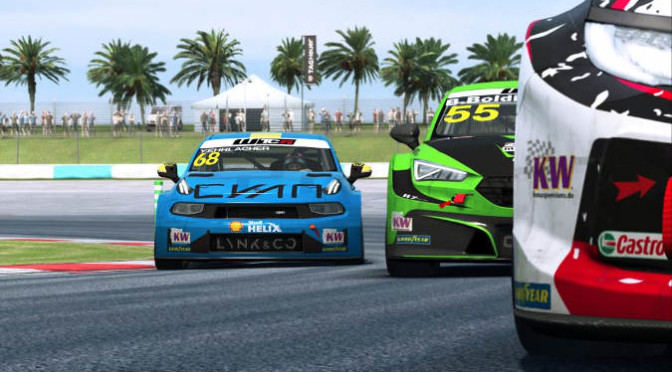 Yann Ehrlacher is the virtual King of WTCR after he came out on top of a seven-way showdown for the Pre-season Esports WTCR Championship at an online Sepang International Circuit on Sunday night, a timely boost ahead of WTCR − FIA World Touring Car Cup season getting underway in September.

As was the case when the real WTCR visited Sepang last December, the destination of the title wasn’t settled until the finish of the final lap, with the Cyan Racing Lynk & Co-run Frenchman Erhlacher’s seventh place in Race 2 securing the title on the RaceRoom Racing Experience Platform by five points ahead of the real King of WTCR, Hungary’s Norbert Michelisz.

Michelisz, who took the Race 2 victory for BRC Hyundai N LUKOIL Squadra Corse, beat Argentina’s Esteban Guerrieri (ALL-INKL.COM Münnich Motorsport), the Race 1 winner, to second in the final standings by a slender one point. Guerrieri finished second to Michelisz in the real-life WTCR classification in 2019.

CUPRA Racing’s Spaniard Mikel Azcona looked set to start the deciding race of the series in title contention until he was handed five penalty points by stewards just before Race 2 began for a driving infringement in Race 1.

That decision put him out of the championship fight but he responded by completing the Race 2 podium in third place to clinch fourth in the final standings ahead of Slovakia’s Mato Homola (BRC Racing Team) and Argentina’s Néstor Girolami (ALL-INKL.COM Münnich Motorsport).

Girolami finished second behind team-mate Guerrieri in Race 1 with Ehrlahcer a distant, but hugely significant third. He knew that providing he could finish Race 2 in P11 or higher he’d be champion.

In the event, seventh would be enough for Ehrlacher after Michelisz was delayed in Race 1 going off-track following contact and finishing down in eighth.

Guerrieri gave it all in his bid to catch and pass Michelisz from seventh on the grid but ultimately ran out laps and had to settle for second, as Michelisz was able to capitalise on his front-row start.

Sepang’s action-packed double-header will be replayed on the WTCR’s social media channels from 09h00 CET on Monday (20 July).

Race 1:
Lap 1: Guerrieri converts his DHL Pole Position into an early lead as Girolami passes Ehrlacher for second at Turn 1. Ehrlacher goes wide. Tassi makes contact with Azcona on the rush to T2. Langeveld nudges Homola off-line. Ehrlacher and Tassi battle for third. Comte goes off following contact from Ceccon. Boldizs, Björk and Coronel are all delayed but continue.
Lap 2: Azcona challenges Tassi for fourth at T1 but he brakes too late and goes wide, losing the place he only briefly holds. Langeveld and Homola battle for sixth, Michelisz closes up and demotes Homola, his fellow Hyundai-powered driver. Boldizs attempts a move on Monteiro, the Portuguese resists and Boldizs loses momentum as a result, which allows Björk to pass the Hungarian. Björk then tries to make more progress with a move on Monteiro. There’s contact but he’s through to ninth. Comte, Ceccon and Priaulx all join what is now a six-car battle.
Lap 3: The six-car fight for ninth rages on. Björk drops behind Monteiro, who clashes with Ceccon between T1 and T2. Comte tries to pass Björk. He fails at first but then gets ahead. Björk responds, there’s contact and the Lynk & Co driver is back ahead of the Peugeot pilot. There are more battles between this group and a clash between Björk and team-mate Priaulx allows Ceccon to snatch P12.
Lap 4: Azcona continues his pursuit of Tassi and forces his way ahead. The move puts Tassi wide, Langeveld closes up and takes P5 from the Hungarian, then challenges Azcona and takes the place. Tassi faces a new threat from Michelisz, who hits his younger compatriot. They both half-spin but Tassi’s delay is more severe, which allows Homola to get ahead. Langeveld and Azcona battle hard, bashing sides on the run to T15. Azcona forces his way ahead around the outside of the tight left-hander but goes wide on the exit, which allows Langeveld to get back ahead.
Lap 5: Michelisz drops from P6 to P11 following contact. He re-joins and makes an instant move on Boldizs in his efforts to recover lost ground. There’s a brush and Michelisz is up to P10. Azcona and Langeveld continue to battle. Comte passes Monteiro at T1. Björk and Priaulx pass Ceccon.
Lap 6: Girolami closes up to Guerrieri and even has a half-look at T1. Tassi passes Homola, Azcona edges clear in P4, Ehrlacher is running on his own in P3. Girolami goes onto the grass at T14 but keeps second. Homola and Tassi continue to battle for P6 but Homola takes the place on the line.

Race 2:
Lap 1: The title is between Ehrlacher, Michelsiz and Guerrieri. Comte leads away from the reverse-grid DHL pole, Boldizs challenges Michelisz for P2 but Michelisz resists. Comte goes wide at T1 and drops back, gifting Michelsiz the lead as Boldizs follows him through. Ehrlacher is roughed up in the battling pack and drops from sixth to ninth. He scraps with Girolami before slipping to P10 behind Tassi. Boldizs goes wide following contact with Comte. Homola is up to second.
Lap 2: Guerrieri challenges Homola for second around the outside at T1, he gets ahead at T2 but can’t make the move stick and drops to P4 behind Comte. Ehrlacher is up to P10, as Comte challenges Homola for P2. Guerrieri passes Comte for P3 with a fine move through a left-hander. Ehrlacher is briefly in trouble as he slithers sideways underbraking for T15. He hits CUPRA-driving Boldizs as he regains control.
Lap 3: Guerrieri is now hassling Homola in second and finds a way through. Girolami is up to fourth.
Lap 4: Tassi moves from P8 to sixth, Ehrlacher is now in ninth before passing Comte at T1. He tries to demote Langeveld but ends up whacking the Audi driver. Guerrieri is closing on leader Michelisz. Homola and Azcona battle.
Lap 5: Azcona passes Homola for fourth with the Slovakian falling to sixth behind Tassi. Homola tries a move on Tassi at T15 but can’t find a way ahead as Langeveld closes up. The Dutchman passes but Tassi quickly regains the place.
Lap 6: Langeveld hits Tassi underbraking at T1, sending Tassi wide. The incident allows Homola and Ehrlacher to join the battle and Ehrlacher is able to overtake Homola for P7. Langeveld stays ahead of Tassi to the line in fifth. Michelisz holds on to win ahead of Guerrieri by 0.708s. Ehrlacher is the champion in seventh and receives applause from his Pre-season Esports WTCR rivals.

THE WINNERS SAID WHAT?

Esteban Guerrieri (Race 1): “It was a good race, a good victory. With Néstor, we had a very good pace both of us. It’s very good for Honda, for ALL-INKL, and for all the team! There are no mechanics here, but they’re at home probably watching, it was a nice 1-2 for us.”
Norbert Michelisz (Race 2): “It was a very nice race for me. And, to be honest, it was a very nice championship and I’m really happy that I took the chance and took part because it was just amazing to race against these guys online. I’m really looking forward to race them on real tracks! But it was good to have a bit of a warm-up, congrats to Yann, he did a fantastic job and I think he deserves to be the champion of Esports WTCR.”
Yann Ehrlacher (Pre-season Esports WTCR champion): “First I want to congratulate everyone who took part to this championship, it was nice to see so much WTCR drivers or ex-drivers joining the series. Thanks to the organisation, it was very nice to drive in this championship with all the guys. It was tough, I spent hours to fix my simulator to recover from the pre-season I did. I’m pleased to start the ‘2020 season’ this way, even if it’s only virtual, it’s always good to bring a virtual title at home. Now I’m looking forward to the real one to start, and I hope for the same result!”

What’s next?
The 2020 WTCR − FIA World Touring Car Cup is set to begin with the inaugural WTCR Race of Austria at Salzburgring in Austria from 12-13 September.

All drivers taking part had a webcam and microphone connected, making it possible for viewers to see and hear their heroes during the races. The microphone feature also allowed drivers to be interviewed as well as interacting with their rivals. Videos of drivers on their simulators, at home and enjoying some fun moments were also shared during the one-hour shows.

New-for-2020-liveries were used with six epic tracks, including three that will feature in the real WTCR − FIA World Touring Car Cup, provided the challenge.

Each Pre-season Esports WTCR Championship event included a 10-minute qualifying session followed by a top-five Superpole shootout, which will be part of the official broadcast.

Race 1 lasted 12 minutes with the grid using the combined qualifying results. Race 2 also lasted for 12 minutes but with the top 10 qualifying results reversed to form the first five rows of the grid. Cars appeared as they will look when the WTCR begins, as planned, for real later this year.

Making it happen for the fans
Organised to give WTCR drivers the chance to engage with fans through the WTCR’s social media platforms while they wait the start of the 2020 campaign and a prelude to the full Esports WTCR online championship due to begin later this year, the Pre-season Esports WTCR Championship from RaceRoom in partnership with Eurosport Events listed Goodyear, TAG Heuer, DHL, KW Suspensions, TrackTime and Liqui Moly as partners with a TAG Heuer watch going to the champion. The series promoted the FIA’s #RaceAtHome campaign.