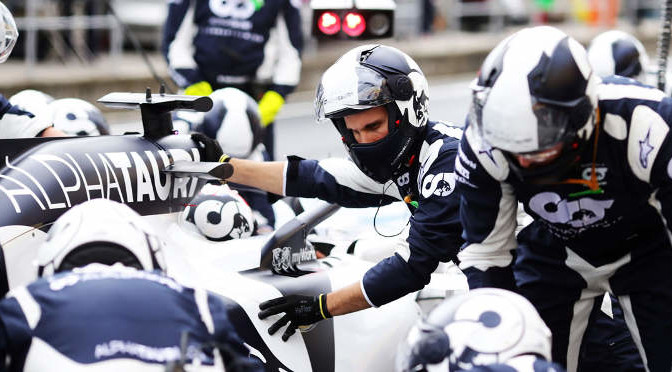 Daniil Kvyat (AT01-03, Car 26)
Race: Pos. 12th
“I was happy with the race pace today, I overtook some cars already on lap one and I made a very good call to go on slicks at the right time. After the pit stops I ended up behind cars I had already overtaken on the first laps. I need to review the race to understand it better, because I felt there was a chance of finishing in the points today and to end up only P12 is not really satisfying. I’m still working on understanding the car with my engineers and we learnt a lot during the last three races. Every lap is important and we’ll try different solutions to suit the car a little bit more to my driving style in Silverstone.”

Pierre Gasly (AT01-04, Car 10)
Race: DNF
“It was a very difficult weekend for us. For some reason we struggled the whole time, with a few issues here and there. Today we had a drivetrain issue and since the beginning of the race I had problems with gear shifts which we tried to fix on track but we couldn’t, so we just had to retire the car. It’s a big shame, but we were just unlucky this weekend. Now we have a few days to prepare for Silverstone and I hope to have a better weekend there.”
Jody Egginton (Technical Director)
“Not a great result today. We had to retire Pierre’s car early on due to a gearbox issue and we were not able to move Dany forwards into the points, both of which are disappointing. The inter tyre was the obvious choice for the start of the race but the soft tyre we elected to fit at the first stop suffered more degradation than we expected, so we were forced to bring Dany’s second stop forward, fitting the hard and trying to go longer. With the forecast rain not materialising we unfortunately had no opportunity to get back into the fight for points today, finishing 12th. Overall, although the car has shown some reasonable pace at various points this weekend, we have not got it all together here in Hungary and this is something we will be working hard to resolve ahead of the next race.”