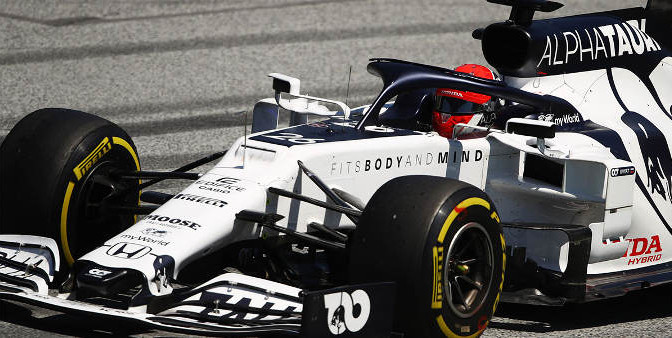 Pierre Gasly (#10)
“I could sum up my two weekends in Austria as Race 1: a good result to finish seventh and score points, and Race 2: it was a great qualifying to make it to Q3 and seventh on the grid, but a disappointing result. Right after the start, I got hit and the damage to the floor and other parts meant I could not run at the pace we had. At least Daniil picked up a point, although I had expected to do better from seventh on the grid.

“Overall, I got a positive feeling after these two opening races, however, we still have a lot of work to do if we want to finish in the top ten on a regular basis. It wasn’t a bad start to the season and we already saw some signs of progress from the first to the second race. We had a new front wing for the Styrian GP and I think that helped a lot in terms of performance. Now we must continue to work hard and move in the right direction. The team’s development programme should produce something positive in the next few weeks to help us fight our competitors in the midfield.

“As for the Paddock life, it was an unusual experience racing in these special conditions. You get around the paddock much quicker, but the biggest difference is the lack of spectators, so it’s less lively and there’s not much of a buzz around the place. To be honest, for the drivers, it’s not that bad having fewer people in the paddock because we have more free time. We get more time to rest so we have more energy when it’s time to drive. But in terms of atmosphere, the fact there’s no one around means it’s not the same.

“Now we come to Hungary. People say it’s all about Saturday qualifying, which is partly true, but it’s not like Monaco, in that there are some places where you can overtake at the Hungaroring. Apart from that, it’s one of my favourite tracks and I love racing there. You can get into a really nice rhythm at this track, so it’s one of the highlights of the season for me. It’s a big change from Austria in terms of the set-up you need on the car, so we will have to see how we go on a more twisty track layout with fewer straights, I think it might suit us better.”

Daniil Kvyat (#26)
“The past two weeks in Austria brought mixed emotions. After the first race, I was disappointed with myself as I could have brought home some big points. However, I had to immediately leave my frustration behind as the turnaround between Grands Prix was fast. Then for the second race, we had a lot of potential to get into Q3 on Saturday, but I got blocked on track and missed out on that. It meant the race was very challenging starting that far back, but I’m happy with how I managed and how the team handled the race. Even though we lacked a bit of pace, we defended well and kept cool heads and managed to bring home a point under difficult circumstances. So I was quite happy to conclude that day at the office with a point.
We were able to make some progress on the car between the two races, but it can be hard to see that, especially when everyone is doing the same and you are on the same track again just a few days later. We lacked some pace in the second race, but I felt as though I’d squeezed everything I could out of the car, which was pleasing from a driving point of view.

“I’m not sure what we can expect this weekend in Hungary. We will have to go there and see how the car behaves on that kind of track on Friday, as it’s very different to the Red Bull Ring. I hope we will have a bit more performance and once again score points.

“Life at the track has certainly been different as you’re not allowed to do much outside of your own bubble. With what’s been happening, it’s been a lonely world for quite a while now and this has just made it a little bit lonelier! But I’m not complaining, because every time I get to drive the car I really enjoy it. It’s cool, we are very focused on the actual racing and I think that’s not bad at all. Of course, it means that on Sunday night after a race, you just have a quiet evening. But that’s no bad thing when we have race after race, so it’s important to keep a good rhythm.”

After the two races in Austria, it’s already time to think about the Hungarian GP, where overtaking can be difficult. We asked Pierre and Daniil how they’d avoid finding themselves in a potential DRS queue…