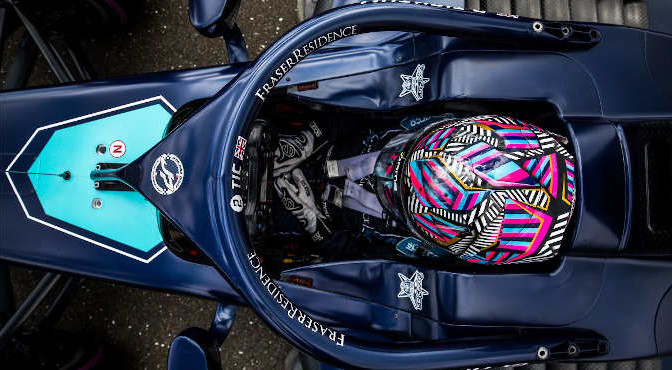 DAMS driver Dan Ticktum made it two Sunday podiums in a row at the Red Bull Ring, Austria, following up his eighth-place finish in the FIA Formula 2 Championship Feature Race with an impressive drive to second in the Sprint Race. Sean Gelael claimed a strong double-points finish during the Styrian Grand Prix weekend, climbing from 10th in the Feature Race to seventh on Sunday.

“At the beginning it looked like we might be in for a difficult weekend. We weren’t there in qualifying but in race one I did exactly what I was set out to do, which was to get the reverse grid pole. I felt I drove well and the team made a good strategic call to pit me early and put me into clear air. In the Sprint Race, I couldn’t get the tyres up to temperature in the beginning, so we definitely need to be a bit more aggressive and put more energy through the tyres. Pretty much every lap I did on Sunday was within a tenth and I was right on the limit. I think if we do some more good work over the next few days, we’ll be able to challenge for victories.”

“I’m happy with this weekend. We did two races without any technical difficulties, so we’re really pleased with that. Friday started off on the backfoot compared to last week, as we didn’t quite expect what the super soft and medium tyres would be like, resulting in a disappointing qualifying. The team rallied together to get the car prepared for Saturday and I could have been where Dan was in the opener. We were back in the points with both cars and had good pace, even though this was my first full race of the year. We came back with another couple of points in the Sprint Race, which I’m delighted with.”

“It was a roller coaster weekend at the Red Bull Ring. Since the first round, we worked hard to ensure Sean didn’t get another technical issue, and it was good to see that the car was reliable. The 18-inch wheels meant the tyre characteristics were a lot different from in the past, so we didn’t get the most out of qualifying. Both Sean and Dan drove a great comeback in the Feature Race though to both get in the points, and it could have been two DAMS cars on the front row. Both drivers also managed points in the Sprint Race and we weren’t too far off victory with Dan, who scored his second podium in four races, which is very encouraging. We know what we need to work on ahead of Budapest, so we’re looking forward to hopefully scoring more points.”