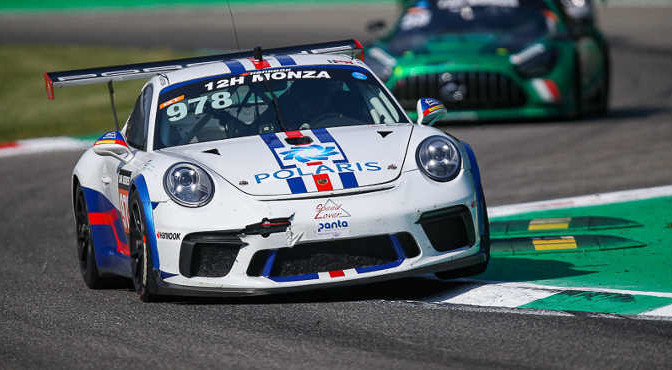 Herberth Motorsport has secured a 1-2-3 finish at the Hankook 12H MONZA after an incredible grandstand finish to CREVENTIC’s maiden event at the Autodromo Nazionale di Monza.

The longest endurance event ever to be held at ‘the temple of speed’ was briefly red-flagged on Saturday afternoon when a severe rain storm made track conditions treacherous. More drama was to follow though. Heading into the final 10 minutes, and having only just passed its sister entry on-track for the overall lead, the race leading #91 Herberth Motorsport Porsche 911 GT3 R (Daniel Allemann / Ralf Bohn / Robert Renauer / Alfred Renauer) ground to a halt at the Variante del Rettifilo.

The new leader – the #92 Herberth Motorsport Porsche 911 GT3 R (Jürgen Häring / Taki Konstantinou / Alfred Renauer) – wasn’t out of the woods though, and had to hold off the incredibly fast-charging #93 entry (Steffen Görig / Stefan Aust / Klaus Bachler), with Klaus Bachler pulling 10 seconds out of the lead with every passing lap and setting the event’s two fastest laps in the process. At the chequered flag, and after an incredible nail-biting finish, the top two Herberth Motorsport Porsches were split by less than half a minute after 12 hours of endurance racing.

Despite its brutal bad luck, the #91 Porsche was still far enough ahead to claim 3rd overall and secure a podium sweep for Herberth Motorsport at Monza.

The race’s only GT4 entry – the MDM Motorsport BMW M4 GT4 (#450, Tom Coronel / Tim Coronel / Jan Jaap van Roon) – secured its first category win of the season, despite suffering a front left puncture during the final hour of the race.