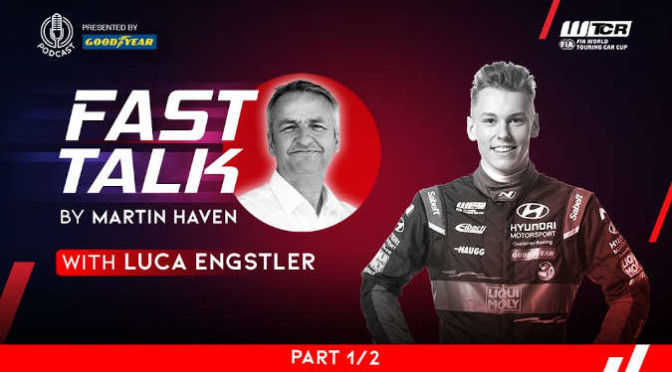 Still only 20 and already a multiple title winner in touring car racing, Luca Engstler is one of the many exciting additions to the WTCR ranks for 2020.

But as well as being the inspiration for his son’s career behind the wheel, Engstler Sr was also the man who kept it on track when the younger Engstler was contemplating a life away from the sport he was effectively born into.

After a torrid second season of ADAC Formula 4 in 2016, Engstler Jr couldn’t see a light at the end of the tunnel. His conclusion, as he tells Martin Haven in part one of this WTCR Fast Talk podcast presented by Goodyear, was to stop.

“I never told the story but after those two seasons in Formula 4 I actually wanted to stop because the two years were really frustrating for me,” the former Hyundai Junior Driver says. “I was in school, working hard and preparing as hard as I could [for racing] but we didn’t have the right capacity or the right budget and [we] were always in the back of the grid.

“After the last race we went back home, my engineer, my Dad and me in the motorhome. I told them that like this it makes no sense [to carry on]. You try to manage everything as good as you can. But by the end of the weekend you never have the chance to compete against the big teams.

“I asked what is the plan, what can we do? My Dad said, ‘there are some tests on Wednesday in the TCR car. Let’s go and try and if we feel like it’s the right way to do it, then we throw everything in and we try it’.”

Engstler did “throw everything in” at that Hockenheim test and the rest, as is often said, is history. “That test was really good, I was very fast,” he recalls. “I said, ‘let’s forget those two years and we focus and start from zero again’. I was quite lucky at this time to have this test. Since then the focus is only on touring cars.”

That focus carried Engstler to the TCR Germany Rookie of the Year title in 2017 and the runner-up spot in the overall standings the following season. He also has TCR Asia, TCR Middle East and TCR Malaysia (twice) titles to his name. He’s been a race winner in TCR Europe and scored WTCR points when he stood in for Augusto Farfus in Macau last November. Combined, those performances have earned him a full WTCR campaign in a Hyundai i30 N TCR in 2020 when he has been tipped to shine.