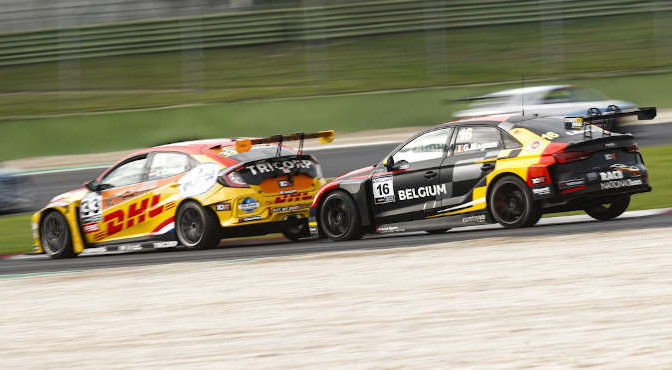 Restructured, Europe-only calendar and re-opening of entries allow Magnus to race in WTCR *Belgian promise a contender for new-for-2020 Rookie Driver Award with Comtoyou Racing *Magnus: “The level is really high but I’m going to push myself for this amazing opportunity”

Gilles Magnus will step up to the WTCR – FIA World Touring Car Cup in 2020 with the support of the RACB National Team, the talent search and development programme instigated by Belgium’s national ASN.

The 20-year-old follows fellow young guns Mikel Azcona, Luca Engstler and Attila Tassi by graduating from TCR Europe to WTCR, which is switching to a six-event, Europe-only format for this season in response to the coronavirus pandemic.

He will drive a Comtoyou Racing Audi RS 3 LMS and will be eligible for the new-for-2020 Rookie Driver Award. This classification is for drivers under 23 on 1 January 2020 who have not taken part in more than three WTCR or FIA World Touring Car Championship events previously.

Magnus has been able to register as a full-season competitor after the FIA re-opened WTCR registrations for a limited period amid growing interest from drivers. His status as a third Comtoyou Racing driver is permitted under the terms of the sporting regulations, which allow two-car teams to expand to a three-car line-up if they include a rookie racer.

“It’s great that one of the top talents of TCR Europe has been able to take advantage of the restructured WTCR calendar and the re-opening of full-season entries to step up to WTCR,” said François Ribeiro, Head of Eurosport Events, the WTCR promoter. “The RACB National Team has a proven record of detecting young drivers with huge potential and it’s certainly the case with Gilles Magnus, who proved his ability with some great results in his first season racing in TCR in 2019.”

Ribeiro continued: “With young drivers like Bence Boldizs and Luca Engstler also on board, the WTCR’s Rookie Driver Award is really taking shape and it’s going to be really exciting to watch their progression in 2020. Creating a separate classification for these young talents is a really good way of comparing their performances as they build their experience in WTCR.”

From karting to TCR Europe revelation: RACB’s Theunis backs Magnus to shine at world level
With success in karting and single-seater racing, Gilles Magnus was one of more than 500 drivers to apply for the RACB National Team’s touring car scholarship for a combined TCR Benelux and TCR Europe programme in 2019, driving an Audi RS 3 LMS run by Comtoyou Racing. Le Mans 24 Hours legend Tom Kristensen was a member of the jury that picked Magnus ahead of four other finalists.

Geoffroy Theunis, who heads up the RACB National Team, said: “The new calendar was an affordable opportunity to jump on the WTCR train and we worked hard with Comtoyou and Audi Sport to try to build up his programme to have Gilles on the WTCR grid. He is very talented and was one of the revelations of TCR Europe last year, one of the young guns. He’s ready to jump into WTCR and especially with this new Rookie Driver Award. The target will be to win that, it’s the main motivation. But during the 16 races I’m pretty sure he could impress a lot of people because the speed is there and the talent is there. He learned a lot last year in his first season in TCR Europe with some strong results. On all the rounds he could be a good surprise.”

How did this chance to step up to WTCR come about?
“We already announced at the beginning of the year we would be doing TCR Europe, which was already a nice opportunity after I won one race in 2019. Then Geoffroy Theunis from RACB started talking to me about WTCR being a possibility but I wasn’t sure if it was going to happen. But a few days ago, he called me and said, ‘everything was done and we were going to be doing WTCR’, so it’s a dream come true. I am only 20 years old and I didn’t see it coming, so that makes it even more special and I’m really excited. It’s an amazing championship with amazing names like Muller, Tarquini, Coronel, all big guys with a lot of experience.”

You mentioned some big names there and there are many more. Are you ready?
“You always feel ready for more and I definitely feel ready. Although I only have one year of experience in TCR I adapted myself really quick. WTCR is something special and in this new, even higher level, I will adapt myself quick and let’s hope I can do some results. Although the level is really high let’s make the best of it and let’s see.”

How important is it to continue with your team from 2019, Comtoyou Racing, and the car you know well, the Audi RS 3 LMS?
“That’s a good thing, I know everyone. It’s the same as doing another TCR Europe season only with a higher level. The team is the same so that’s really good you have one year of experience with the same people. That’s always an advantage.”

Of the tracks on the calendar you have experience of the Hungaroring but are the others new?
“I know Hungaroring and also Aragón, I have done some single-seater races there. But all other tracks are new to me. It won’t be easy but I like a challenge.”

And the challenge doesn’t get much bigger than the Nürburgring Nordschleife?
“It has always been a dream to be there, to drive there. I’ve done a 24-hour race around the Nürburgring but in a simulator. At least I know where the track is going left and right. But once you are on the real track it will be different with all the height changes and all the details. For sure there will still be some work to do to learn it.”

What does the RACB’s support mean to you?
“It’s a massive opportunity for Belgian drivers, not only in WTCR but also single-seaters. They made Stoffel Vandorne a Formula One driver and Thierry Neuville is where he is thanks to the RACB. It’s a real honour to be a part of it and it would be amazing if every country had this same organisation. I’m very happy and I realise the chance and the opportunity I have now. I’m really pushing myself to make the best of it.”