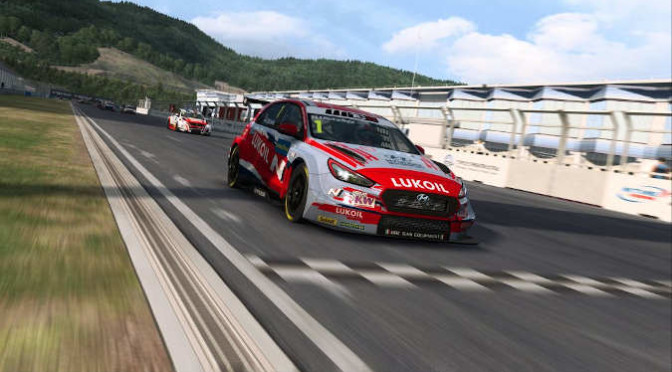 After Frenchman Yann Ehrlacher converted his DHL Pole Position into a second Pre-season Esports WTCR triumph in Race 1 for ‘home’ team Cyan Racing Lynk & Co, the stage was set for a thrilling battle in Race 2 with all the drama broadcast on Eurosport plus other TV channels around the world.

Comte, from France, lined up at the front on the partially-reversed grid and led for the opening laps until Hungarian Michelisz found a way through in his BRC Hyundai N LUKOIL Squadra Corse Hyundai i30 N TCR. Slovakia’s Mato Homola completed the podium in a second BRC Hyundai following some highly entertaining online battles.

Having gone fastest in Qualifying but only third in the Superpole one-lap showdown, Honda-powered Néstor Girolami finished Race 1 in second for ALL-INKL.COM Münnich Motorsport with CUPRA driver Mikel Azcona third.

Michelisz, who placed seventh in Race 1, is now six points behind new leader Ehrlahcer in the Pre-season Esports WTCR Championship standings ahead of the Macau double-header on 12 July. Esteban Guerrieri, who was four points in front prior to the Ningbo event, slips to third in the table, eight points down on Ehrlacher, after he finished fourth and eighth in the two Chinese races.

Race 1:
Lap 1: Ehrlacher gets a great getaway from the DHL Pole Position but it’s a different story for Tassi, who falls from fourth to sixth. He’s quick to fight back, however, taking fifth from Homola. Langeveld is also on a charge and demotes the Slovakian further.
Lap 2: Azcona, in second, remains in touching distance of Ehrlacher. Girolami is third with Guerrieri fourth. Langeveld pressures Tassi and there’s contact at T3. Tassi is sent into a half spin, goes over the grass as he regains control and incredibly stays ahead of Langeveld. It doesn’t take Tassi long to regain his composure and close up to Guerrieri.
Lap 3: The top three are running together but the pressure Girolami is applying to Azcona works in Ehrlacher’s favour with the Frenchman edging clear. Girolami tries a move on Azcona at the final corner after the Spaniard goes wide. He holds on to the position, however.
Lap 4: With Ehrlacher pulling away, Girolami’s mirrors are now full of the advancing Guerrieri and Tassi. The threat from behind is all the incentive Girolami needs to pass Azcona at T15.
Lap 5: Guerrieri overtakes Azcona at T9 but Azcona gets a better exit and is back ahead at T10.
Lap 6: With the clocking running down, Guerrieri pulls alongside Azcona heading into T9. But his exit is compromised, Tassi takes advantage and passes on the run to T10. Guerrieri fights back through T13/T14 and demotes Tassi at T15. Tassi also loses out to Langeveld, who passes around the outside of T17.

Race 2:
Lap 1: Comte and Boldizs make the most of their front-row starts but Homola is sent over the grass at T3 following contact. Homola loses out to Azcona at T7 but takes the place back at T9 where there’s frantic action. Ehrlacher hits Guerrieri under-braking and slithers sideways onto the grass. Björk also takes to the grass. Tassi overtakes Langeveld and Guerrieri around the outside at T10 with a great move. Michelisz demotes Boldizs for second nearing the end of the lap. Boldizs is slow exiting T15 and Homola capitalises.
Lap 2: Tassi passes Azcona for fifth at T5, with Azcona coming under pressure from Langeveld and Guerrieri at T8. Guerrieri goes to the outside of Langeveld entering the T9 hairpin and gets ahead on the run to T10 for sixth. Girolami passes Ceccon for ninth at T15.
Lap 3: Björk passes Ceccon at T3, dropping the Team Mulsanne driver to P11. Girolami briefly slows, Björk pressures Azcona.
Lap 4: Michelsiz snatches the lead from Comte on the inside of T15.
Lap 5: With Tassi pressuring Homola for third and Homola pressuring Comte for second, Michelisz is able to open up a small advantage. Tassi tries a move on Homola around the outside of T9
Lap 6: Comte gets a break thanks to Tassi’s efforts to get ahead of a resolute Homola. Tassi is briefly in front with a fine move at T9 but Homola is back in front exiting the hairpin. Tassi tries again at T15 but there’s no way through.
Lap 7: Ehrlacher sneaks ahead of Guerrieri on the inside at T9. Azcona frustrates the Argentine further by getting ahead on the final lap.

THE WINNERS SAID WHAT?
Yann Ehrlacher (Race 1): “It was a good race, we took a good start, then I was struggling at the beginning with my braking points, I was missing my apexes. Then Mikel came back, he started to fight with Bebu and Esteban so I managed to get a two-seconds gap and I kept it till the end of the race. It was a good race.”
Norbert Michelisz (Race 2): “That was really important, to be honest. I was really looking forward to this race. It’s one of the circuits I enjoy the most online. I didn’t have the pace of the others in the first race, but I knew I could take a chance to go for a podium in Race 2. I’m really happy that I succeeded in this, and I’m looking forward to the next round.”

PROVISIONAL CHAMPIONSHIP STANDINGS AFTER ROUND 8 OF 12:

What’s next?
The Pre-season Esports WTCR Championship heads next to a virtual Circuito da Guia in Macau on 12 July with all the action on Eurosport at 23h00 CET, subject to final scheduling.

All drivers taking part will have a webcam and microphone connected, making it possible for viewers to see and hear their heroes during the races. The microphone feature will also allow drivers to be interviewed as well as interacting with their rivals. Videos of drivers on their simulators, at home and enjoying some fun moments will also be shared during the one-hour shows.

New-for-2020-liveries will be used with six epic tracks, including three that will feature in the real WTCR – FIA World Touring Car Cup, providing the challenge.

Each Pre-season Esports WTCR Championship event will feature a 10-minute qualifying session followed by a top-five Superpole shootout, which will be included in the official broadcast.