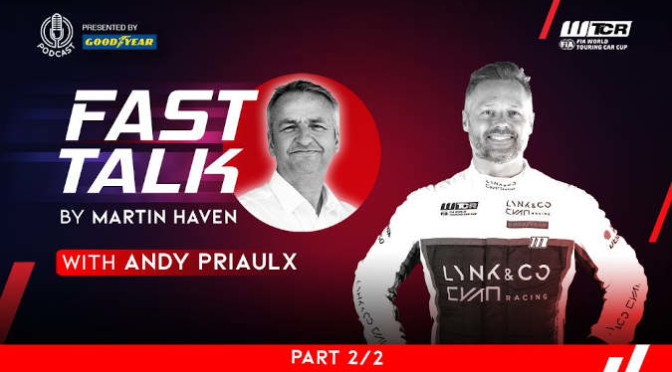 After reminding host Martin Haven of his early struggles and rise up the ranks to test-driving Formula One cars in the first part of his WTCR Fast Talk podcast presented by Goodyear, part two begins with a rewind to arguably the biggest moment of Andy Priaulx’s illustrious career, his first FIA world title triumph in 2005.

Available from 12h00 CET today (Friday), the second instalment of the British driver’s WTCR Fast Talk podcast presented by Goodyear also looks back on his unlikely return to FIA World Touring Car racing in 2019, when he proved he’d not lost any of the pace and ability that made him a WTCC force for more than half a decade.

“That was a tough year,” Priaulx admits in WTCR Fast Talk presented by Goodyear when he discusses the 2005 season, which culminated in him winning the first of three FIA World Touring Car Championship titles. “We didn’t have the best car so we had to grind [out the results]. You would fight just as hard over one point as you would over 15 or 20 points. I just kept myself centred and focused and looked at the bigger picture.

“We were running a lot more success ballast, 40-80 kilograms. Sometimes you were competitive, then the next weekend you were towing a caravan but you still needed to get the big points. Consistency, staying out of trouble [was key] and I was a safe pair of hands. Sometimes having the confidence not to go for the next position and try to win but to take the second place hurts the ego a bit, but in the end, you’ve got less damage and you’ve got bigger points.

“I went to Macau three years in a row and there were six or more drivers who could win the championship, so I never had a comfortable end to the season, it was always down to the wire and it was always tough.”

Post-WTCC, Priaulx was successful in DTM and prolific in sportscar racing, particularly at Le Mans and in the USA, where his son Sebastian will race in 2020, a move that led to the Guernsey driver’s “heart-wrenching” decision to turn down a second season in the WTCR – FIA World Touring Car Cup with Cyan Performance Lynk & Co.

Having not raced front-wheel drive machinery since 2002 and with sportscar events his sole focus since 2016, Priaulx’s addition to the #WTCR2019SUPERGRID was unexpected but eagerly anticipated in equal measure.

“It was a really good season but it was an eye-opener for me,” Priaulx admits of his WTCR campaign in 2019. “I’d forgotten how to drive front-wheel drive. I did one season in 2002, but I soon adapted. I had a very good first weekend in Marrakech, but we were having new car problems and I was coming into a team and the structure of four cars in one team.

“I still had the endurance mentality, where you’re the team player and you compromise your performance to bring the whole team forward. That was my approach at the beginning but I soon learned this doesn’t work in touring car racing.”

Although Priaulx’s move to WTCR was tough-going at first, he was on form for the Asia leg of the series, which began at Lynk & Co’s home track, the Ningbo International Speedpark.

“My performances were not great [at first] but I’d had some issues, not only with the set-up of the car but generally trying to build a team within a team. It was a difficult start but come the mid-point my performances started to get really good.

“It was a tough year but I was very happy to contribute massively to [Cyan Racing’s] Teams’ championship by giving up my own personal goals and opportunities to give my team-mates the chance to fight for the title. It does knock the stuffing out of you when you have a season like that, it’s not a lot of fun. It was in at the deep end coming off the back of a strong WEC season.”

Priaulx admits his Macau triumph last November was an important moment in his return to World Touring Car racing, but actually made his decision not to carry on in 2020 even harder, such is his high regard for Cyan boss Christian Dahl.

“When you start in a new series you’ve always got to win respect and it was nice to win in Macau because it proved I’m still capable, but I’d been capable of winning earlier in the year although people lose sight of that fact. I was close to Christian, the team boss. A very strong, solid personality but very fair. He told me as it was and I really respected that. He’s a tremendously successful person and I’m very grateful for the chance they gave me and for giving me the chance to continue with them. It was a difficult decision to make, but I’ve had to focus on other areas of my life. My son’s career is going places and I had to make a choice, him or me and it was always going to be him.”

Andy Priaulx’s WTCR Fast Talk podcast presented by Goodyear, the WTCR’s official tyre supplier, and hosted by Martin Haven, is available in two parts at FIAWTCR.com and other outlets. Click here to listen or follow this link: https://www.fiawtcr.com/wtcr-fast-talk/