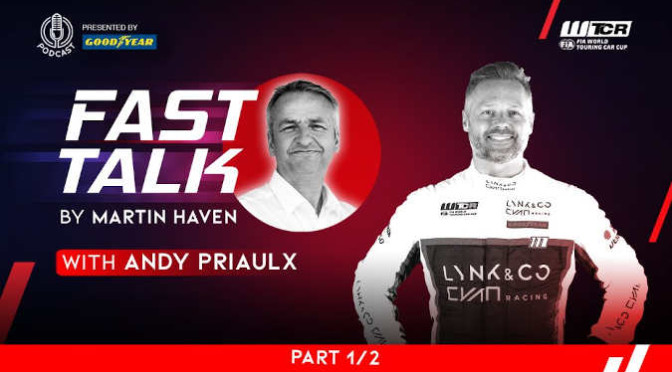 Andy Priaulx is the ultimate example of a racing driver who made the most out of an opportunity, going from relative rags to considerable on-track riches, courtesy of three FIA World Touring Car titles and a whole lot more.

What started out as a hobby on his native Guernsey, where everything with an engine appealed – karts, motorbikes, even powerboats were sampled – turned more serious when Priaulx and father Graham took their interest in hillclimbing to another level by contesting the prestigious British championship.

The move to the mainland culminated in the younger Priaulx winning the British title in 1995 in the Formula One-engine category with 10 wins and eight course records. Following in the wheel tracks of legends Niki Lauda and Sir Stirling Moss, who also hill-climbed as the Channel Islander is quick to point out, Priaulx’s success attracted interest from Sir Jackie Stewart, who tried to sign him for his son Paul’s Formula 3 team.

While that approach didn’t lead to a ride, it fired an enthusiasm in Priaulx to try to make it as a professional in single-seaters, the discipline that he believed would make him a complete driver.

“I had to learn the art of motor racing,” Priaulx tells host Martin Haven of his switch from the hills to the circuits in part one of his WTCR Fast Talk podcast presented by Goodyear. “It was like a top tennis player switching to badminton or table tennis, I had to learn it all again.

“We sold our house and lived in a caravan, I bought and sold cars, my wife Jo got a job in the ticket office at Silverstone and we had £20 a week for food. Then I became an instructor at Silverstone and got some support, but there was a lot failure before I made it.”

After winning the Renault Spider title in the UK in 1999, Priaulx was handed a test with the manufacturer’s British F3 team. What was initially planned as a 10-lap run turned into 20 laps and an invitation to a shootout at Magny-Cours in France.

With Jenson Button leaving the squad to take up his Williams Formula One drive, there was a seat available and Priaulx’s testing performances convinced the Promatecme team that he was the man for the job.

“I probably earned my career based on one-off opportunities,” says Priaulx, 45. “Whenever I was given five laps to show my speed, I was able to turn those laps into full-time drives after that. I always learned how to be comfortable in the uncomfortable. I always had a bit of an act of faith going into the first corner in hillclimb, not sure quite what level of grip you’ve got but sorting it out. I was always able to use that to give me a good performance level in everything I did, by being versatile and taking it to the limit immediately.

“You’ve just got such small windows to show yourself in this business, especially if you haven’t got the money to buy yourself in, you need the very best opportunities and you’ve got to make it stick.”

Priaulx certainly made the most of an opportunity with BMW in the revitalised FIA European Touring Car Championship for 2003. He finished third overall with three wins before taking the title the following year. And when what was the ETCC evolved into the WTCC for 2005, Priaulx was part of the factory BMW line-up and took the world title in a nervy Macau decider. He repeated the feat in 2006 and 2007 but he very nearly followed a different path.

“I got the invitation to test in Formula One, a really nice situation from Dr Theissen who offered me the test because of the championships I won for him,” Priaulx remembers. “I was 31, 32, I had already written off my Formula One career but to get the test in Valencia was really special.

“Of course, me being me, I didn’t just take it as a prize and went there to do a professional job. I was very fit, I trained really hard for that test. They thought I was going to do 10 laps but I ended up doing 72 laps that day and actually ran with the main Formula One drivers of the time and was really competitive. It went from a prize drive to a pretty much serious testing role within Williams for the next two years, it blew me away really.

“Williams were really keen for me to step up as the main test driver and reserve driver. Antonio Pizzonia was occupying that position and I had to make one of the first really tough decisions in my career. I knew at that time I would have been the oldest rookie on the grid, if I tried to go down that Formula One route, so I prioritised my touring car commitments over the Formula One stuff and kept it real. It was a difficult choice but the right choice.

“But I still did some years with BMW Sauber after that with Formula One testing and got paid for it as well so that was even better. But ultimately it was just a fantastic opportunity. It sped up my processes and my brain was working so much faster, I was just at the top of my game.

“One year I raced the Nürburgring 24 Hours and won it, jumped on a plane and was in Vallelunga [in Italy] the next day testing three days in the Williams, then I was back on a plane to Silverstone and on the Friday it was free practice for the World Touring Cars. But I was adaptable and that was from my early years when I was hillclimbing and just able to switch between things.”

Andy Priaulx’s WTCR Fast Talk podcast presented by Goodyear, the WTCR’s official tyre supplier, and hosted by Martin Haven, is available in two parts at FIAWTCR.com and other outlets from 12h00 CET today (1 July). Part two, which covers his career from 2005 onwards including his return to FIA World Touring Car racing with Cyan Performance Lynk & Co in the 2019 WTCR, lands at 12h00 CET on 3 July. Click here to listen or follow this link: https://www.fiawtcr.com/wtcr-fast-talk/