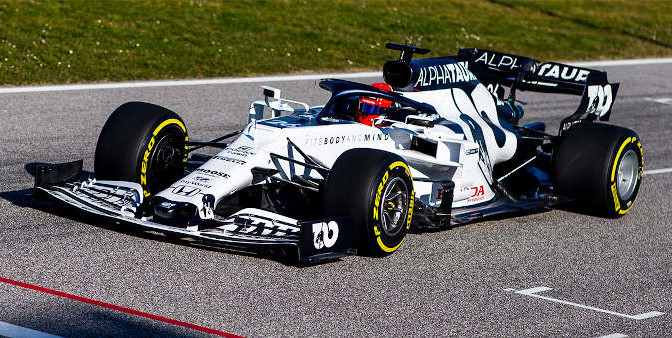 Pierre Gasly (#10)
“After Australia was cancelled, I went to Dubai as that had always been my plan to go there before moving onto Bahrain for the second race. I thought I’d spend two or three days there to see how the situation evolved. Then we saw that Italy had shut its airports, so I couldn’t go back there and I also did not want to go back to France and maybe put my family at risk after all the flights I’d been on. So, I decided to stay in Dubai with my trainer and we effectively had a two month training camp. Restrictions in Dubai were pretty much the same as in Europe and you had to wear a mask and gloves to go outside the apartment.

“Eventually, I returned to France in mid-May which was a strange experience, with an almost deserted Dubai airport and no direct flights to France so I had to go via Frankfurt. Everything ran late, I missed my train and ended up with a seven hour drive to get home! It felt good to spend some time with them, because usually I don’t see them much during the year. I’ve never had such a long break from racing or from flying, as we’re usually at an airport every few days. Nor have I ever spent two months in one place before, since I was maybe ten years old.

“In Dubai, I probably trained for 58 days out of 60, so physically I’m in the best shape of my life and I’ve really improved. I spent some time playing on line with some friends and I also decided to improve my Italian and took some lessons on line. I also worked on getting my boat pilot’s license, as well as doing some real karting and playing golf. When I got back home to France, I continued with the karting and also took part in the virtual F1 and Le Mans races which was a fantastic experience. It was fun and filled the time. I also kept in touch with the team, talking to Franz every week, as well as my engineer. Then finally, we got to drive a real Formula 1 car again at Imola for the filming day, first in the 2018 car and then in this year’s. It was incredible, especially at Imola, one of my favourite tracks, where I last raced in 2012. It made me super happy.

“I miss racing, the adrenaline, the competition and the speed, so it’s super that we can start again. It’s going to be really busy with a race nearly every week, so it’s a very exciting time right now. It’s a shame there will be no fans at the first few races, but I feel it was important to get the season started as soon and as safely as possible. Hopefully things will free up in the coming months.
I trust all the safety requirements to be in place. There are certainly plenty of restrictions in terms of how we can move about and talk to people, with all sorts of health related rules in place. It’s not straightforward and we will take all the necessary precautions. For the drivers, at least when we are in the car, it will all seem like normal. It’s outside that things are more complicated.”

Daniil Kvyat (#26)
“After the race in Melbourne was cancelled, I just wanted to get home as quickly as possible, because that’s where you want to be in these kind of times. As soon as I got back, the lockdown started so I was pretty much in quarantine in my home in Monaco. It was interesting times, a bit different, but we tried to adapt to find some different things to do, including some sport as it was important not be just sitting around doing nothing. Some aspects of it were not so bad and I slept a bit more than usual! But after a while it became quite monotonous. It was the longest time I went without driving a real race car apart from when I had a year off from Formula 1, so I have experienced this sort of long break before.

“As soon as the karting tracks were opened up again at the beginning of May, I was there right away. It was good to be driving again and I did quite a lot of it and it was a useful way of keeping alive your muscle memory for driving and racing, as well as being enjoyable.

“During the lockdown, I kept in touch with Mattia my race engineer. In fact, I have a small simulator at home and together with him, we did a few qualifying simulations. I would connect him via an iPad that I had next to me and we would simulate a qualifying session and he would talk to me as though we were doing it for real on an actual track. That was the best we could do. I know a lot of the other F1 drivers did a lot of this sim racing, but I have to say it’s not really my thing as I don’t feel it’s very representative of driving an actual car. At the moment, I have not been able to come to the UK and use the team’s real simulator because of all the quarantine restrictions in place, so we will have to see how that situation develops in the next few weeks.

“As for the actual racing and how this season develops, we will just take it one race at a time. I will race where I am told to do so on the basis that the people who run the sport have done their work and decided it’s safe to do so for ourselves and everyone around us. I trust that we are in good hands and that we will have an adequate calendar to follow and execute. I hope there will be no unexpected surprises. As for keeping masks on at all times at the track, we worked under these conditions at our recent filming day and I’d say it’s something you get used to quite quickly, just like when the Halo was first introduced for example. You get used to it after a few hours. One thing we will have to get used to will be the lack of fans. it will be weird to see the empty grandstands, the crowd is an important aspect of all sport and we will be missing it.

“As to how we will get on, it’s hard to say. In terms of track data to look at, we only have what we acquired in Barcelona in the winter. We will turn up in Austria with a good plan to tackle the Red Bull Ring and then we will see. It’s a track I like, with an old-skool layout featuring plenty of fast corners and I’ve always enjoyed racing there. We will be there for quite a while with the two races back to back and it’s a nice place to be, in the countryside so it means we can put in some training time in the fresh air.”

We finally go racing again this weekend and right on time here’s our Austrian Grand Prixview. We asked Pierre and Daniil how they would deal with a specific race scenario: namely, you’re running P7 with good pace. Do you settle for that or risk pushing for P6?