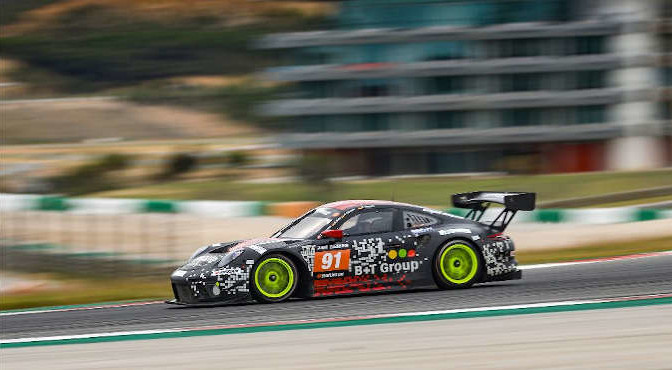 Following the first 24H SERIES Europe race of the year two weeks ago in Portugal, CREVENTIC and its competitors are gearing up for their first collaborative race together at the Autodromo Nazionale di Monza on 10-11 July.

More than 25 cars are already confirmed for the inaugural Hankook 12H MONZA, the second round of this year’s delayed 24H SERIES Europe and the first time in CREVENTIC’s 14-year history that the Dutch-based endurance motor racing championship has hosted an official event at the vaunted temple of speed.

In the wake of Covid-19, the health and safety of our competitors and all track-side personnel remains a top priority heading into next month’s Hankook 12H MONZA. Following the successful trial, all protocols practiced in Portugal will once again be regulated at the Autodromo?Nazionale di?Monza as look to go racing, safely, once again in 2020.

Herberth Motorsport enters its first three-car line-up since last year’s Hankook 24H BARCELONA for Monza. Team stalwarts Daniel Allemann and Ralf Bohn are set to race once again alongside Herberth principal Robert Renauer in the #91 Porsche, while Steffen Görig and Stefan Aust have been earmarked for the sister #93 991 GT3 R.

Like the 12H MONZA E-Sport event, which was ultimately won by eTeam WRT in a 1-2 finish for the Belgian team, the 12H SPA ESPORTS will be split into four categories. Teams can register an entry for the TCR class (which will use a virtual representation of the Audi RS3 LMS), GT4 (either the Porsche Cayman GT4 CS or BMW M4 GT4), 991 (Porsche 991-II Cup) and/or GT3 (Audi R8 LMS, Ferrari 488 GT3 or Mercedes-AMG GT3).

CP Racing, which took both the 24H SERIES Europe and Continents GT crowns in 2018 (then under the PROsport Performance banner), returns to 24H SERIES action in Monza with a brand new Mercedes-AMG GT3 Evo. Former series drivers’ champions Charles Putman, Charles Espenlaub and Joe Foster will once team with compatriot Shane Lewis.

Equipe Verschuur (#9, Mike Verschuur / Harrie Kolen / Erik van Loon) is set to return to the 24H SERIES for the first time since last year’s Hankook 24H BARCELONA. No doubt the Dutch team will be hoping for a more successful race than it endured in Barcelona, at which its Renault RS01 GT3 completed just 21 laps after myriad drivetrain problems.

Series stalwart Speed Lover, a two-time class winner during last year’s 24H SERIES Europe, will also compete at Monza having registered two cars in the ‘991’ class. Dominique Bastien and Gavin Pickering are set to team in the #978 Porsche, while Olivier Dons, Eric Mouez and Rolf Richard will team together in the sister #979 911-II Cup.

BBR (#107, Kantadhee Kusiri / Kantasak Kusiri / Anusorn Asiralertsiri / Munkong Sathienthirakul / Chariya Nuya), a former TCR class champion in the 24H SERIES under the Monlau Competición moniker, got its season off to a solid start with 5th in-class in Dubai. The final CUPRA entrant thus far is for Red Camel-Jordans.nl (#101). Last year’s TCR SPA 500 winner, which also secured TCR class victory in Spa-Francorchamps and the Circuit of the Americas, will team father-son duo Ivo and Luc Breukers together at Monza.

Almost certain to be among the front-runners in Monza will be Autorama Motorsport by Wolf-Power Racing. The Swiss/German collaboration not only took TCR victory last time out in Portimão but also clinched the Overall TCE Teams’ championship in both the 24H SERIES Europe and Continents after winning four of the seven rounds held last year. Autorama / Wolf-Power will once again enter two Volkswagen Golf GTIs, one for Sandro Pelatti, Alberto Vescovi and Roberto Ferri (#1), another for Miklas Born and Constantin Kletzer (#112).

Having made a winning start to its season in Dubai, AC Motorsport (#188, Stéphane Perrin / Vincent Radermecker) will also hope to replicate its podium from Portimão in Monza. Finally, Brutal Fish by KCMG (#122, Martin Ryba / Daniel Lloyd / Josep Oriola Vila), a class contender in the early stages of this year’s Hankook 24H DUBAI in the early stages, has thus far entered the field’s only ‘FK7’ spec Honda Civic Type-R.

On top of our confirmed entries, upwards of a dozen others teams have also registered an interest in competing at the Hankook 12H MONZA. Entries are still being accepted.