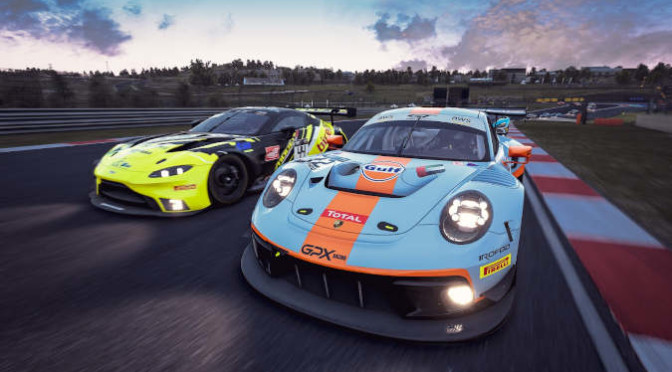 The SRO E-Sport GT Series was decided in dramatic fashion today, with a pair of tense Assetto Corsa Competizione races at Kyalami bringing the curtain down on the five-round championship.

Louis Deletraz captured the Pro Series title by finishing third in the season-ending contest, concluding a hugely impressive campaign by the Porsche youngster. His championship success looked secure for much of the race, though a fierce battle for victory saw Luigi Di Lorenzo (Aston Martin) narrowly defeat Jordan Pepper (Bentley) to complete a run of five winning brands in as many races.

In the Silver Series, Jesus Sicilia (Aston Martin) snatched the title in dramatic fashion. Starting the day fifth in the standings, he took victory on the road to seal the championship, edging title rival Kamil Franczak (Lamborghini) to claim the crown.

Both races simulated a 5am start, the Pro contest beginning in ideal conditions with the morning sun rising over Kyalami. Deletraz entered the decider with a nine-point championship lead and, having qualified on pole, was in the perfect position to complete the job.

The Porsche man initially held his advantage, but was quickly passed by a determined Di Lorenzo. Deletraz was also overtaken by impressive wildcard competitor Angus Fender, only for the McLaren to spin after what appeared to be contact with the Porsche. For a moment the Swiss driver’s title looked to be in jeopardy, but no penalty was issued. Deletraz was nevertheless relegated to third when Jordan Pepper made his way past, the South African enjoying his best run since winning the Silverstone opener.

Deletraz still had the championship under control at this stage, but with his rival Ben Barnicoat (McLaren) surging from 16th on the grid to run fifth at the end of the opening lap he could not afford to make any mistakes. Meanwhile, the main action was taking place out front. Di Lorenzo initially pulled a healthy gap, but Pepper put his Kyalami knowledge to work and began to reel the Aston Martin in.

Their battle came to a head shortly after the 40-minute mark, when Pepper got a run on Di Lorenzo and launched up the inside entering The Crocodiles. Door-to-door contact followed, with Pepper coming off worse as his Bentley rotated 90 degrees and briefly came to a halt. He was able to continue and maintained second spot, though Di Lorenzo had disappeared up the road.

But their battle did not end there. Over the following 20 minutes Pepper wiped out a five-second advantage and was on Di Lorenzo’s tail yet again by the closing laps. The Aston Man held firm, however, crossing the line to secure his maiden series victory by just half a second.

The gap to third was 17 seconds, but that did not matter to Louis Deletraz as he wrapped up the Pro Series title. A run of three successive podiums, and points finishes at all five rounds, make the Porsche man a very worthy champion, with Barnicoat shadowing him in both today’s race and the final standings.

Michael O’Brian (McLaren) completed the top-five, followed by Scott Malvern (Bentley) and a pair of McLarens driven by Ben Tusting and Fabrizio Crestani. David Fumanelli was the top Ferrari in ninth, while erstwhile title contender Lorenzo Marcucci finished 10th in his Audi.

While the Pro race was bathed in morning sunshine, the Silver Series hopefuls faced a dawn downpour for their decider. Seven drivers remained in contention for the championship, and with points leader Patrick Selva starting from 31st on the grid and second-place man Arthur Kammerer 35th, there was everything to play for over the final hour of competition.

At the front poleman Franczak knew that a win could net him the big prize, but his chances took a knock when he made contact with Jack Keithley (Bentley) at the start. This allowed Sicilia to jump from fourth into the lead, swinging the championship advantage towards the Aston Martin driver.

Sicilia had already shown his wet weather prowess by earning a superb win at a drenched Nürburgring, but he faced a very worthy opponent in Franczak. Competing in the colours of FFF Racing, the Lamborghini driver quickly moved into second spot and set about reducing the six-second gap that Sicilia had built early on.

The race developed into a game of cat and mouse, with Franczak closing to within a few tenths only for Sicilia to retaliate and pull away once more. Meanwhile, the other title hopefuls fell by the wayside. The McLaren trio of Selva, Kammerer and Nils Naujoks struggled with significant success ballast, while David Tonizza (Ferrari) was hit with a drive-through and Andrea Capoccia (Audi) could not progress beyond ninth.

This meant that the battle for the race win would decide the destination of the championship. Franczak threw everything at Sicilia, but he could not break out of the Aston Martin’s spray. A superb win for the Spanish ace ensured that he took the title, becoming the only driver in either series to win multiple races.

A mark of the leading duo’s performance was that third-placed Chris Hoeke (Bentley) was more than 20 seconds adrift at the finish. Giorgio Simonini (Audi) and Alexandre Vromant (Lexus) completed the top-five, the latter scoring his first points of the season. The same was truth of Tariq Gamil (Bentley), who beat Jan-Marcel Dietrich (Porsche) to sixth spot. Amir Hosseini (Mercedes-AMG) was eighth, while Capoccia and Keithley completed the top-10.

While the titles have been decided, a grand finale race will give the star performers from each class another chance to demonstrate their Assetto Corsa Competizione skills. This winner-takes-all contest will feature the top-20 from both the Pro and Silver standings, as well as the 10 best Am Series competitors, with a date and location to be announced ahead of the event.

Deletraz and Sicilia will be among the hot favourites to challenge for victory in this all-star contest. Having emerged on top from a close-fought series of races against ultra-competitive opponents, each driver has earned their title of 2020 SRO E-Sport GT champion.