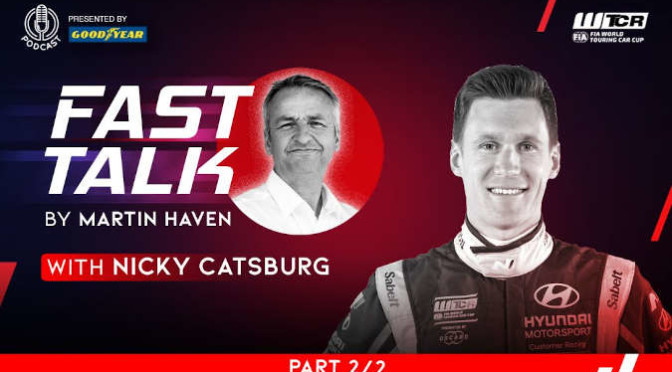 In part two of Nicky Catsburg’s WTCR Fast Talk podcast presented by Goodyear, the Dutchman continues his recollections of a career that began as a reward for not smoking as a teenager and has included winning an FIA world championship motor race, in addition to a host of other successes in endurance racing.

Available from 14h00 CET today (Friday) and hosted by Martin Haven, Catsburg is typically engaging and forthcoming in the latest episode of WTCR Fast Talk presented by Goodyear as he discusses some of the highs and lows he’s experienced competing with a roof over his head, such as a notable triumph (at WTCC Race of Russia in 2016) and some trouble (at WTCR Race of Japan in 2019).

With GT racing his focus in 2018, Catsburg was a year behind the bulk of his rivals when he joined the WTCR – FIA World Touring Car Cup last season, lining up on the #WTCR2019SUPERGRID in a BRC Hyundai N LUKOIL Racing Team i30 N TCR. It was by no means a straightforward campaign.

“The level was very, very high, there were some superstar drivers and it felt like everyone wanted to be there,” says Catsburg of life in the WTCR last year. “It was so intense and I remember Norbi Michelisz being on an extremely strong level. It was definitely not my easiest season, maybe my toughest in general. The racing was always fun but there were a couple of moments when it went over the edge a bit in terms of aggressiveness. I definitely played a role in that and I wish some of the events hadn’t gone the way they went. In the end, Norbi, driving the same brand as me, won the championship and that was extremely important for us as a team.”

The flashpoint came at Suzuka last October. Catsburg takes up the story on WTCR Fast Talk presented by Goodyear: “Things were quite aggressive and I would say I’m definitely one of the more aggressive drivers, but it’s just the way I drive. Sometimes that works very well, and sometimes [not]. During the season these ‘supporting’ roles were starting to get a life of their own and people were starting to think everyone was supporting their team-mates and crashing people off, but this was really not happening.

“In Suzuka, Norbi was trying to overtake Andy [Priaulx]. Norbi was fighting for the championship so he didn’t want to take any risk and said Nicky, ‘you should have a try at trying to overtake Andy’. The first thing that happened is that I smash him off. Everybody thinks I did this on purpose but if you look at the video it was a racing incident. Whose fault it was is something to debate about. He obviously thought it was my fault, I honestly thought it was his fault. But to then go into this discussion that [we] did it on purpose, that [we] had the intention of smashing somebody off, this was really too much. I can only say that incident definitely was not planned and I felt really bad afterwards because I always felt I had a really good relationship with Andy.”

There were happier times in 2019, of course. “Grabbing pole position at Slovakia Ring and having Norbi in my tow was a very cool experience,” Catsburg says. “Macau was very nice getting the fastest lap of the weekend because I never felt at ease in Macau [until last year].”