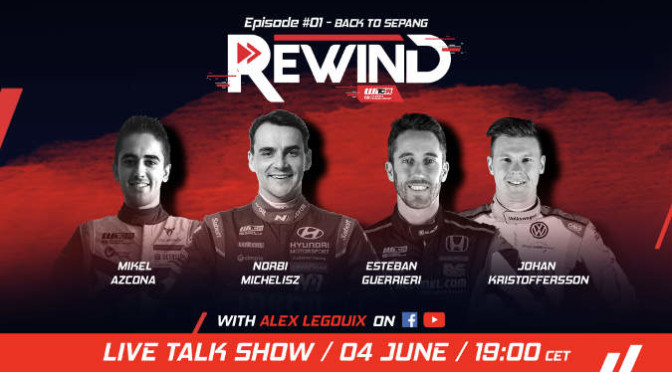 A new live, online talk show featuring drivers and team members discussing the stories that made the headlines in the first two seasons of the WTCR − FIA World Touring Car Cup has been launched by series promoter Eurosport Events.

Streaming on Facebook and YouTube at 19h00 CET on Thursdays and hosted by WTCR pitlane reporter Alex Legouix, WTCR Rewind will highlight a major event in each episode and bring together virtually the main protagonists plus an expert commentator.

Episode one, Back to Sepang, is available tonight (Thursday) from 19h00 CET and looks back on the now-legendary Sepang super-finale at WTCR Race of Malaysia last December when Esteban Guerrieri and Norbert Michelisz fought it out to be crowned King of WTCR.

Guerrieri and Michelisz will be joined online by the two other racers who played such a crucial role on that stormy Sunday night, Mikel Azcona and Johan Kristoffersson, while Stéphane Barbe, who was at Sepang to report for the French newspaper L’Equipe, will provide an expert view.

The five guests will rewind six months and recount what they did that night (15 December 2019) and the emotions they experienced, with Legouix adding her memories to the discussion.

Footage from the event will also be shown while fans will get the opportunity to interact with drivers by posting comments on the WTCR Facebook page.

“Since the coronavirus pandemic took hold, we’ve made it one our priorities to provide daily online content and keep our social media channels busy with things like Esports WTCR, replays and original material from the drivers, to keep fans entertained while they stayed safe at home,” said François Ribeiro, Head of Eurosport Events, the WTCR promoter. “And with the WTCR season not due to start until September we wanted to give something special back to the fans to say thank you for all their patience and support. We’re really excited by WTCR Rewind and we hope our fans will be too.”