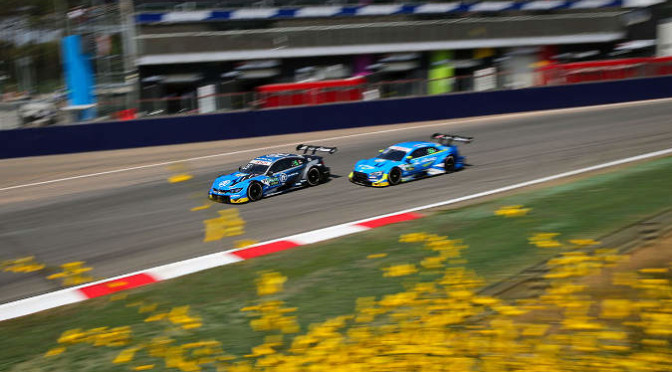 Single, double and even triple: the DTM is providing racing action for its fans with events closely following each other. A mix of double and single events will see the DTM stage a total of 20 races in three European countries in the second half of 2020. The new calendar features events in Germany and rounds in neighbouring countries. The calendar was set up entirely new as a result of past and current restrictions due to the Covid-19 pandemic. The new DTM calendar gets underway with a true highlight: the unique Norisring street circuit in Nuremberg will be hosting the season opener mid-July. There are double events with races on two consecutive weekends at the Nürburgring the Lausitzring (both Germany) as well as at Zolder (Belgium). Single events at Hockenheim (Germany), Assen (The Netherlands) that forms a ‘triple header’ together with the Nürburgring as well as the DTM’s return to Spa-Francorchamps (Belgium) round out the calendar that stretches out to early November.

DTM to bring double and triple fixtures to Germany, Belgium and The Netherlands

The months of August, September and October are promising an intense race experience: across the twelve weekends in these months, no less than eight events of the popular touring car series have been scheduled. For the 16 drivers of Audi and BMW, this means ‘crunch time’ in the decisive stage of the season. For the first time since 2005, the famous Spa-Francorchamps circuit with its long heritage is back on the DTM calendar. The Nürburgring will be hosting a grand total of four DTM races and, unseen since 2003, both at the full Grand Prix circuit and on the shortened configuration. The race track at Zolder remains a regular fixture on the DTM calendar and can boast about the highest number of DTM races outside of Germany. Having made its much-publicised debut as a DTM venue in 2019, Assen is again part of the traditional circuits that also include the venues for the season opener and the finale: while the Norisring Speedweekend serves as the series’ season opener for the first time, the season will be concluded at Hockenheim, keeping up a long tradition.

Detailed infection protection plan allows for races to be held

For the around 600 hp strong DTM cars of Audi and BMW to return to the race track for the series’ official test days at the beginning of June, the ITR together with experts have outlined a detailed infection protection plan that is being continuously adapted to the current situation. Such an efficient concept that continuously is taking into account the on-site conditions as well as the current development around the Covid-19 pandemic is a pre-requirement for races to be held. In the process, latest requirements by the European countries and the German federal states that are involved continue to be implemented in the plan. As a result, given the current situation, the DTM’s basic plan involves races without spectators on site. However, developments around the various event locations are monitored carefully. As far as it is possible and justifiable from health and safety perspectives, races with spectators on site will be considered as well.

Tickets to be converted to flexible ticket vouchers

For this reason, tickets for the initially planned event for all buyers will be converted to flexible ticket vouchers in line with legal requirements. This enables fans to respond to latest developments and use these vouchers accordingly. Vouchers remain valid until 31 December, 2021, and therefore also for races to be held next year. The voucher process will be handled from 4 June onwards through the email address tickets@dtm.com. More information at dtm.com

Next to the DTM, the DTM Trophy will also be present with races at six events. The new GT series with 20 cars on the entry list at the time of writing will have its races at Spa-Francorchamps, at the Lausitzring, during both events at the Nürburgring, at Zolder and at Hockenheim. The series will be the core of the support package with further high-profile series to be added within the next weeks.

» Quotes
“We would like to thank our fans for their patience in the past weeks, but now, we are all the more happy to be able to present a well-prepared and varied calendar that promises plenty of racing action. That is the result of the hard work by everyone involved in very special conditions. All in all, we have managed to come up with a compact calendar that was worth waiting for.”
Gerhard Berger, Chairman ITR e. V.
“This comprehensive race calendar is great news for all DTM fans. Many thanks to Gerhard Berger, those responsible within the ITR and at the race tracks as well as everybody else involved for making this happen. For the teams and drivers, this extremely compact season will be a real challenge. Nevertheless, we are all just happy for the action to finally get underway again. For us at Audi Sport, it is a major objective to compete in as many races as possible in our final DTM season. I am convinced that we will get to see great racing. Of course, it would be a dream if the finale at Hockenheim and perhaps also further races prior to that could be held in front of spectators. But now, first of all, we are anticipating the start of the season and we hope for spectacular television footage. Our goal is clear: we want to win as many races as possible, defend our titles and bid our farewell to the DTM fans with many great races.”
Dieter Gass, head of Audi Motorsport
“The presentation of the adapted DTM race calendar makes us anticipate the start of the season even more. The focus on Germany and its neighbouring countries Belgium and The Netherlands is in line with the current requirement to refrain from unnecessarily long travel and transport itineraries. Moreover, I welcome the planning of back-to-back race weekends at the same venue. That also reflects maximum efficiency and planning stability. However, it is important for me to emphasise that we only can and want to have races when the general situation allows for it, the concepts to do so are approved by the authorities and health and safety of everyone involved in the DTM can be guaranteed.”
Jens Marquardt, BMW Motorsport Director