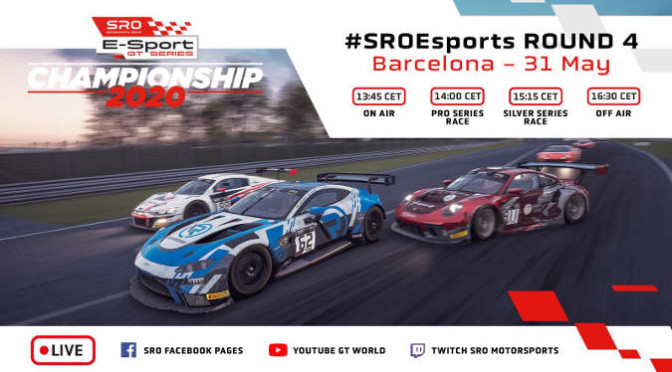 The SRO E-Sport GT Series enters a crucial phase this weekend (30/31 May) with a trio of one-hour races setting the virtual championship up for its deciding battle.

Once the initial championship is decided the best performers from each class will progress to a winner-takes-all grand finale. On Sunday afternoon the Pro and Silver Series contenders will each compete at Circuit de Barcelona-Catalunya, while the Am Series moves to the Nürburgring for a Saturday evening showdown.

Marcucci sits third in the championship, followed by Luigi di Lorenzo (Aston Martin) and Silverstone winner Jordan Pepper (Bentley). Each of these drivers also looks set to qualify for the deciding contest, but the battle to join them remains highly competitive. Indeed, at this stage of the season a single strong result could be all it takes to secure a place in the grand finale.

Among those looking to book a spot, David Perel represents the leading Ferrari representative having taken fifth-place finishes at Silverstone and the Nürburgring. It could also be time for a Lamborghini driver to hit the front, with Dan Wells emerging as the Italian marque’s top performer thus far. AC Milan footballer Alessio Romagnoli also continues to represent the brand after making a strong debut at the previous event.

The Mercedes-AMG GT3 has been consistently fast at the Barcelona circuit in real-world racing and the manufacturer’s virtual drivers will hope to replicate this form on Sunday. Rival marque BMW will also target a strong result at the Spanish track, with 13th-place Benjamin Tusting currently the Bavarian brand’s top championship performer.

A number of wildcard entrants will join the grid for the Barcelona contest. Porsche’s roster will include experienced Italian duo Matteo Bobbi and Federico Leo, while Bentley’s line-up is bolstered by former GP2 racer and F1 test driver Dani Clos. Finally, Jenson Button steps aside for Zak Brown, with the McLaren Racing CEO at the wheel of the brand’s 720S. Brown has plenty of real-world GT experience to call upon, notably contesting the Total 24 Hours of Spa in 2010 and 2011.

The Silver Series has been impossible to call, with three winners from as many races ensuring that a clear favourite has yet to emerge. Jesus Sicilia (Aston Martin) won the rain-lashed Nurburgring contest in dominant fashion, making his move for the lead after 40 minutes and then carving out a 25-second advantage.

But, despite not securing a win in 2020, it is Ferrari ace David Tonizza who leads the standings. The Italian is the only driver to score in all three rounds and tops the table with 31 points, four clear of Sicilia and Silverstone winner Patrick Selva (McLaren).

With 25 drivers registering points over the opening three races the battle to secure a spot in the grand finale is especially fierce. The question ahead of the Barcelona contest is whether another new winner can emerge. Arthur Kammerer (McLaren), Amir Hosseini (Mercedes-AMG), Kamil Pawłowski (Lamborghini) and Nils Naujoks (McLaren) have all threatened to make a breakthrough and will hope to deliver at Circuit de Barcelona-Catalunya.

Coverage of the Pro and Silver Series races begins at 13:45 CET on Sunday and will air on TV and across a variety of online platforms, including the GT World Challenge Powered by AWS website, the GT World YouTube account, and the SRO Motorsports Twitch and Facebook pages. What’s more, the public vote to decide the venue for the final championship race will open once the broadcast concludes.

The Am Series promoted by RaceDepartment will also be in action this weekend, staging its third event at the Nurburgring. Samir Ibraimi (Porsche) leads the standings after two rounds, followed by Silverstone winner Nizar Sahraoui (Bentley) and Mikhail Statsenko (Audi), who triumphed last time out at Spa. The action will take place on Saturday, with a broadcast team featuring Vicki Butler-Henderson and Martin Haven going live on the RaceDepartment Twitch channel at 21:00 CET.

With three crucial contests taking place at two world-class circuits, it promises to be another exciting weekend of virtual action as the SRO E-Sport GT Series enters its deciding phase.