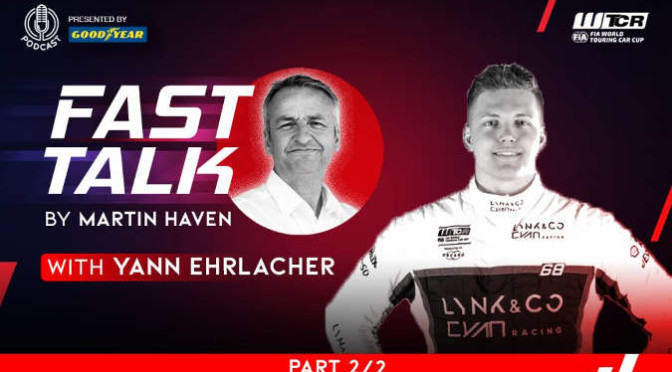 In part two of his WTCR Fast Talk podcast presented by Goodyear, Yann Ehrlacher tells host Martin Haven how a phone call led to a first WTCR test at a snow-hit Oschersleben, a drive with ALL-INKL.COM Münnich Motorsport in the inaugural 2018 season, two wins before a move to Lynk & Co power for 2019 where he became a team player in more ways than one.

Ahead of the delayed 2020 season getting underway, Ehrlacher also talks about the tough times he’s experienced racing in WTCR, how simracing is helping with the “pressure” and why ice racing is much more difficult than it might look.

Here’s a full summary of what’s in store of part two of Yann Ehrlacher’s WTCR Fast Talk podcast presented by Goodyear, available from 12h00 CET from today (Friday 29 May).

00m35: Nothing on the table for WTCR despite strong rookie season in WTCC
00m58: Not enough budget to join Uncle Yvan’s new team
01m24: Chance phone call leads to a test with ALL-INKL.COM Münnich Motorsport in the snow
02m09: WTCR drive secured in Honda Civic Type R TCR
03m36: Going up against Yvan Muller in separate teams
05m08: Dealing with the Balance of Performance “rollercoaster”
07m08: A “proper win” in FIA World Touring Cars from fourth on the grid with some “pressure”
08m42: Confidence and trust increases at ALL-INKL.COM Münnich Motorsport
09m43: Praise for team-mate Thompson after “unreal” situation at Zandvoort
12m10: Turning things around after a China crisis that continues into Japan and Macau
13m30: Bad moments good for the soul
14m15: Work experience at Brands Hatch leads to fun times at Spa-Francorchamps
15m33: GT action with Mercedes power in French GT
16m59: From driving in Lapland to electric ice racing in France
18m37: Joining Cyan Racing for Lynk & Co-powered WTCR bid alongside three world champions but mindful that “the only pressure is in the tyres”
21m32: Adapting to life as a “manufacturer” driver
23m20: Positives despite struggling in Slovakia and being brave in debriefs
26m20: Dealing with team orders and mixed feelings at Zandvoort
28m41: Rating 2019 out of 10 and playing the team game
30m50: Variety but no time to relax in ELMS with Yvan’s team and a pole position at Silverstone
31m59: Endurance racing at home, at night
32m39: Why spending time at race tracks even when not racing is better than Netflix
32m59: Ice racing in the Elite Pro category and commuting to Malaysia
35m43: Trophée Andros just “so difficult” with constantly-changing grip
38m25: Rule number one: there is no rules driving on ice
39m10: Working on plans for more ice racing
39m45: Tripling time racing online but quadrupling cycling time to keep fit
40m25: Training to manage pressure in simracing

Yann Ehrlacher’s WTCR Fast Talk podcast presented by Goodyear, the WTCR’s official tyre supplier, and hosted by Martin Haven is available in two parts at FIAWTCR.com and other outlets. Click here to listen to parts one and two or follow this link:https://www.fiawtcr.com/wtcr-fast-talk/